Morph Club is the Best Kind of Animorphs Nostalgia 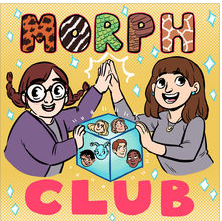 Editor’s Note: As there was no Steven Universe episode last night, we’re running Vrai’s piece on a great Animorphs podcast instead. I think you’ll agree that, given Thursday’s bombshell, it’s quite thematically appropriate. –Sam

No series taught me more, at the tender age of nine, about war, death, trauma, loss and excruciating body horror than Animorphs. I can comfortably say that KA Applegate’s children’s novels are irrevocably stamped all over my tastes as an adult (frankly it’s a short skip and a jump to Cronenberg’s The Fly remake with its gruesome and poignant thematic exploration of terminal illness, so much so that Applegate referenced it in the books). And thanks to Megan and Carey, the fine hosts of the Morph Club podcast, I’ve had a great opportunity to revisit that beginning.

For readers who fall on either side of the 90s nostalgia trench, Animorphs was a sci-fi fantasy series (with frequent elements of war story, space opera and body horror) written for a middle-grade audience, about five teenage kids who happen across a dying alien one night and wind up as Earth’s last hope against a body-snatching invader known as the Yeerks. Their only weapon is an alien technology that allows them to morph into other creatures for two hours at a time, hence the title.

Coming out at a blazing pace of one book a month (for a total of 51 in the main series, plus the “megamorphs,” various spinoff novels, and even a choose-your-own-adventure), the series eventually started employing ghost writers and flagged in quality toward the back end. But there’s no denying that what’s good is damn good, with endearing characters and a willingness to portray extremely intense scenes and deal with emotionally fraught topics.

Morph Club is the ideal nostalgia show: its hosts are familiar with the source material and love it dearly, bringing an enervating tone to the discussion; they let themselves be surprised by what’s aged well or what has new depth as an older reader, but aren’t blind or dismissive of what no longer or never worked. In so doing, they offer both a window into what it was like when these books were at the height of their popularity (and I cannot wait for them to cover the questionable-quality TV series) while also offering a way in for unfamiliar listeners.

Each hour-long episode discusses one book in depth as they reread, so even if your memories are vague or you can’t/don’t want to/can’t afford to read along yourself, you can still enjoy the conversation with a full sense of what’s going on. Like Rose Buddies, the passion and charm of the hosts goes a long, long way to making the show welcoming for a whole spectrum of listeners. The structure is loose but well-edited, preserving the conversational tone without any excruciating pauses or dead ends.

And seriously, it’s just a great series to preserve. While the books have apparently been reprinted of late with some of the technology and references updated – a move I can theoretically understand even if it makes me uncomfortable to think they’re the only versions available – the podcast is both time capsule and reflection on the same (with supposed discussion to be had on the changes between versions if/when it becomes really noticeable or egregious). Given how much easier it’s become for media to be erased and altered as it becomes all-digital, it feels not just admirable but important to preserve a sense of context.

After all, you can update references to Michael Jordan and salad shooters all you want, but the fact that the books came out in the 90s also affects things like the ecological ethics concerns or the undercurrent of heteronormativity. These are elements of minimal importance to publishing companies, but they’re crucial to discuss and contextualize. And while the series wasn’t influential on the level of the overlapping Harry Potter series, it’s in many ways a potent snapshot of what children’s and young adult media looked like at the time.

As an added bonus, as I write this the show has less than two dozen episodes out–so now’s the time to get caught up with a minimal backlog. Because both hosts are artists (Adventure Zone fans might recognize Carey’s adorable style in particular) there’s a bonus element of lovely accompanying art for each episode that can be found on the show’s twitter page. And these two are just charming, endearing people to spend an hour with.

Vrai is a queer author and pop culture blogger; they definitely named their dog Ax at the tender age of nine. You can read more essays and find out about their fiction at Fashionable Tinfoil Accessories, support their work via Patreon or PayPal, or remind them of the existence of Tweets.