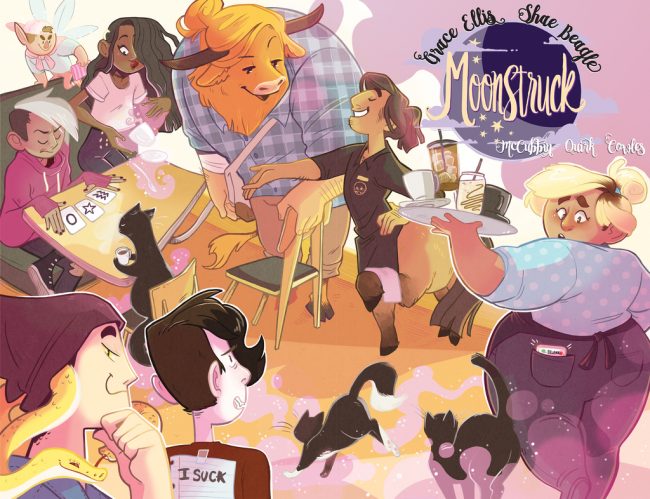 The first issue of Image Comics’ Moonstruck comes out today, and the fantastical story from writer Grace Ellis (Lumberjanes) and artist Shae Beagle is a genuine treat full of adorable magical creatures and a moving story about our barista protagonist, a werewolf named Julie who longs for normalcy and love—a sentiment I’m sure many of us are familiar with.

“Fantasy creatures are living typical, unremarkable lives alongside humans, and barista Julie strives to be the most unremarkable of all. Normal job, normal almost-girlfriend, normal … werewolf transformations that happen when she gets upset?” goes the description, “But all bets are off when she and her centaur best friend Chet find themselves in the middle of a magical conspiracy. Will Julie and Chet be able to save their friends? Is Julie’s dogged determination to be normal a lost cause? Who’s going to watch the coffee shop while our heroes are out saving the world?”

In an interview with the Moonstruck team, Beagle explains that the story began as a five-page short story at the Columbus College of Art and Design, and when the two teamed up, they ended up turning it into something more with editor Laurenn McCubbin. Many elements of Moonstruck stuck out to me, from the dynamic and expressive style that immediately draws you into this magical world, to the way it captures a wide range of characters that can sometimes be lacking in mainstream fantasy stories.

An unfortunate tendency within the fantasy and sci-fi genre is to tell stories that are invested in otherness but fail to include those voices in their narrative. We’ve seen so many films and books talk about race, sexuality, or disability in metaphoric ways, but completely push these characters aside when it comes to representation. Moonstruck is a story that incorporates magic and magical creatures without falling into this trap, and it does so with a wide array of representation among its characters.

“When I was thinking about how magic was going to work in the world of Moonstruck, I started thinking about how other kinds of otherness work in the real world, like race and sexuality and ability, how things like that function,” says Ellis, “And those aren’t just window-dressing sorts of things. There’s nobody who’s says, ‘You are black and that doesn’t affect how you interact with the world as all.’ So that’s not how it is for magic in this story. Otherness colors how the world sees and interacts with you so it colors how you see and interact with the world.”

Ellis talks about Julie’s friend Chet as one such example. “Chet is a centaur so that impacts how they see the world. They take up a lot of space physically, so they take up a lot of space emotionally, they’re not afraid to be out there. They’re not afraid to put themselves out there because the way this particular magic affects them physically. Meanwhile there’s Julie who can kind of hide her magic away and she’s able to be ashamed of it in a way that Chet just isn’t.”

McCubbin adds, “There’s people who want to read all kinds of stories and people who want to read stories that feature queer people and women and people of color and have it not be about their queer-ness, woman-ness, and people of color-ness. Julie is Puerto Rican, but the focus isn’t that she’s from Puerto Rico. Julie is gay, but the story isn’t about her coming out—it’s that we want these stories to be like, ‘Hey, it’s people like you having adventures.'”

The topic of representation is also one we see play out in the book as well, with a book series titled the Pleasant Mountain Sisters, a favorite of Julie’s and her love interest’s. It’s a very cool and interesting story-telling device that adds to the ways that Moonstruck is playing with form. Ellis points out “it’s not just a straightforward action-adventure story or a straightforward slice-of-life story … there’s some weird storytelling stuff we did.” In the first arc, pages of the Pleasant Mountain Sisters are drawn by Kate Leth (Hellcats) and will pass on to a different artist for the next arc. She explains:

“The stuff that’s happening in the Pleasant Mountain Sisters pages is reflective of the main story. It’s kind of Julie’s internal monologue. So Julie has been obsessed with these books since she was a kid, her number one goal is to be the writer on Pleasant Mountain Sisters and I’m a big believer in the idea that the media we consume shapes who we are as people. So I was thinking about the kind of media that Julie would have read a lot of as a kid and how that made her who she is—an anxious werewolf who doesn’t want to be a werewolf even though everyone else is fine with it.

Pleasant Mountains Sisters are these uber normal, uber white, and uber, uber human with no magical creatures in them at all and she kind of takes that and really internalized it. I think they play a very important role in Julie’s characterization.”

Don’t we all have a Pleasant Mountain Sisters in our life? Julie’s desire for normalcy, Beagle tells me, “has a lot to do with what is coming up for her, it’s something that she’s going to have to confront in a very direct way.” In the way that we see media’s influence on our Moonstruck characters, the Moonstruck team also hopes that their comic will foster change in our media. Ellis says:

“I hope that it can expand out our idea of who’s allowed to be a protagonist, because a lot of time gay people are in the background or they’re just white gay people. There’s so many different types of people out there but the kinds of people who are allowed to be protagonists in comics is so narrow and that just seems ridiculous.”

This is a book that will definitely bring you lots of joy. Newcomer Beagle’s art is absolutely spell-binding (see what I did there?) matched with Ellis’ equally expressive writing. Additionally, accompanying the story is some delightful back matter that includes a supernatural advice column (ever been curious about the super-specific advice a mermaid would give you?) along with interviews and art from artists like Nilah Magruder, the first African American woman to write for Marvel comics. You can check it out on Image’s site here.