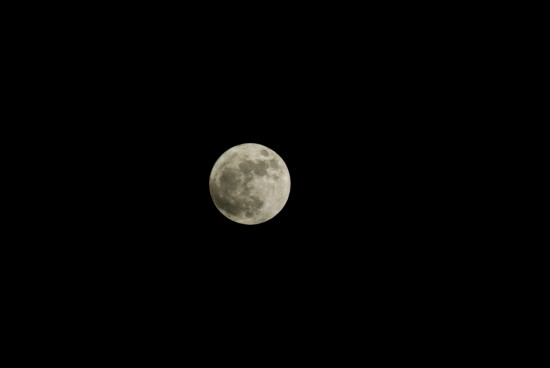 Well, it’s finally happening: the moon is shrinking. New images from NASA‘s Lunar Reconnaissance Orbiter have shown an increasing amount of lobate scarps, raised features that appear along thrust faults, on the moon’s surface. Scientist’s are blaming contraction for the phenomenon. Yes, the moon is suffering from shrinkage.

“‘Relatively young, globally distributed thrust faults show recent contraction of the whole moon, likely due to cooling of the lunar interior. The amount of contraction [from the center of the moon to lunar surface] is estimated to be about 100 meters in the recent past,’ said Thomas Watters of the Center for Earth and Planetary Studies at the National Air and Space Museum and lead author of the paper.

David Morrison, senior scientist at NASA’s Lunar Science Institute and NASA’s ‘Ask an Astrobiologist’ expert who wasn’t involved with this research, likened this process to the wrinkles that form on an old apple as it dehydrates and shrinks. ‘You’re trying to fit the crust [of the moon] around a smaller interior, and the only way that can happen is if these scarps form,’ Morrison told Discovery News.

‘In the Earth system, where you have plate tectonics, you have as many new voids created as mountains thrust up,” he added, pointing out that there is no evidence on the lunar surface for these ‘voids’ — or regions where the lunar crust has been pulled apart to balance out the regions of compression causing the scarps. The moon just has compression regions, wrinkling the surface. The logical conclusion is therefore that the core of the moon has shrunk and the crust buckled under the resulting compression.”

The moon is like a…dry apple? Well, I guess that increases the chances of me fulfilling my dreams of fighting giant space worms. Fortunately it doesn’t look like the moon is going to be leaving our night skies for awhile. And if it eventually does completely shrink out of existence, who really cares. I mean, it’s like the great astronaut Bert Hembrook once said, “I walked on the moon. Did a push up, ate an egg on it. What else can you do with it?”

Check out the images here.