The Moon And Jupiter Are Going To Be Sky-Bros Tonight, You Should Probably Check It Out 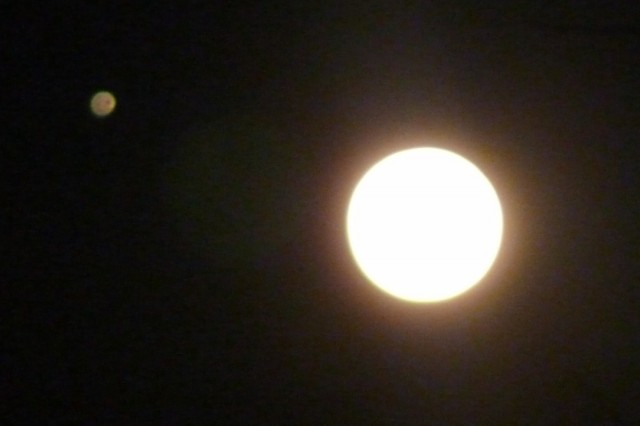 If you head outside once it gets dark tonight, you’ll be able to see some serious cosmic beauty. The moon and Jupiter are going to look incredibly close together tonight, giving you a great view of both celestial bodies, and even a change to spot some of Jupiter’s moons.

The best time to catch the duo is about 45 minutes after sunset. If you look about two-thirds up from the horizon, you should be able to see the moon at its first quarter, and Jupiter will be situated just up and to the left by about five degrees (just like in the above photo). Jupiter is going to be the brightest “star” in the sky tonight (after Venus and the moon, of course), so you won’t be able to miss it.

If you grab a small telescope, or even a good pair of binoculars, be sure to focus in on Jupiter to try and catch a glimpse of some of her moons. Closest to the planet will be Io, then Ganymede, followed by Europa, and ending with Callisto. Unfortunately, if you’re on the west coast of the US and Canada, you’ll miss out on Io, as it will be directly in front of Jupiter.

It’s worth noting that while I’m stargazing, I’m just going to be imagining this:

(via Space.com, image via OC Always)