Allow us to get medieval on you. 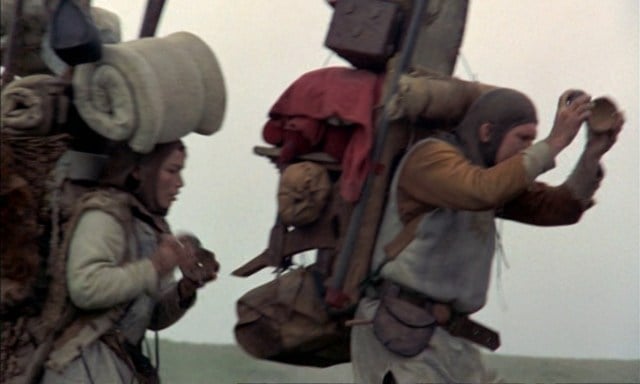 Forty years old this year, the coconut sketch in Monty Python and the Holy Grail may be one of the most iconic opening scenes in film history. The pillar of chivalry, Arthur, King of the Britons, appears riding an imaginary horse like a child on a playground. His faithful servant, Patsy, accompanies him, banging two coconut halves together to make the sound of the horse’s hooves. Arthur and Patsy are very, very serious about their quest. They are the only ones who are.

The whole scene concentrates on those coconuts. The put-upon straight-man of the film, Arthur, gamely tries to explain the existence of coconuts in medieval England (“they could have been carried”). The grail remains all but forgotten as the guards on the castle walls uproariously tear down his explanations. (“Are you suggesting that coconuts migrate?”)

The coconut sketch unpacks the work of comedy. Comedy points out what can’t be commented on, the unspoken, and even the unspeakable. The Emperor’s nakedness is eternally comedic. Monty Python’s coconuts are horses, except that they absolutely are not horses, but coconuts. Worse, they’re coconuts, but coconuts cannot exist in Arthur’s medieval England.

These impossible coconut-horses literally echo throughout the movie, and so does the sketch, as before he is forced to examine a witch, Sir Bedevere attempts to fly a coconut-laden swallow. Audiences are left in stitches and thoroughly convinced of the impossibility of coconuts existing in medieval England.

Except medieval England was lousy with coconuts. No, really, and Monty Python may well have known it.

They’re Oxbridge men, after all, and several Oxford and Cambridge colleges still preserve coconuts given to them in the fifteenth century. Here’s a fifteenth-century coconut cup that came to Oxford more recently. While parts of it were added more recently, the original elements are medieval. This is the only medieval English coconut cup currently displayed online, and it shows how the shell was strapped into a goblet form using a harness of silver or gold. The English continued to make coconut cups after the medieval period—in the sixteenth century, seventeenth century, and beyond. They were numerous enough that by the fifteenth century, individual households might boast several coconut cups. One humble esquire highlighted the prestige of these cups when he willed his coconut cup to his heir in tail male, just like the Bennett estate in Pride and Prejudice or the Crawley estate in Downton Abbey.

But why make luxurious golden goblets out of coconuts? And how did they get to medieval England anyway, if swallows didn’t carry them?

In the Middle Ages, coconut palms were not yet as widespread as they are today. Coconuts grew in their native Maldives, in India, and perhaps parts of western Africa and the Middle East. (They were also growing in western Central America, but had gotten there on their own, crossing the pacific like small, tasty boats without a swallow in sight.) Coconuts formed a regular part of commerce across the Indian Ocean from Roman times, and this trade appears to have continued with little disruption straight through the ancient and medieval periods. Given England’s Roman history, it isn’t impossible that Life of Brian-era English might also have had access to coconuts. These coconuts weren’t transported all that way to be made into cups, however. They were imported as medicine.

Beginning regularly once again in the fourteenth and fifteenth centuries, medicinal coconuts arrived in England. This time, they were packed on Venetian galleys along with luxuries from silks to sugar, and next to exotic pets like monkeys and parrots. In turn, the Venetians got the coconuts from Alexandria and from the same trade networks that the coconuts had been part of for millennia. They were not called coconuts, either. The name “coconut” derives from the Portuguese and dates to the sixteenth and seventeenth centuries-after the medieval period. In the Middle Ages, Europe knew the coconut as the “Nut of India” or “Great Nut.” It was the great, big whopping nut that was transported all the way from India—the only nut large enough to make into a drinking cup.

So much for the Swallow Theory, then. But why make them into such deluxe goblets? The answer here seems to be England’s native fine woodworking tradition. Historically few other cultures built the shells remaining from medicinal coconuts into luxury tableware. Coconut cups were made across medieval Europe, but remain in especially high concentrations in areas with important native woodworking traditions: Germany, the Netherlands, and England. While German and Dutch medieval coconut cups are richly carved, English cups are polished smooth, as are their native fine woodenwares. The English especially enjoyed turned maplewood drinking bowls called mazers, and decorated these with precious metal stands and lips not unlike coconut cups. Moreover, just as lesser wood could be turned into a bowl, we have evidence in medieval records that more inexpensive coconut cups were also made with non-precious metals like copper and pewter, though no examples of these discount coconut cups remain today.

Coconuts turn up in English customs documents, wills, and inventories from the thirteenth century onward. They are not rare, but quite common. Copper- and pewter-harnessed coconut cups would not have been valuable enough to turn up in wills, but it is clear that they existed too, and perhaps in greater numbers than their more luxurious counterparts. By 1500, coconuts had been part of English culture, at least for the middle and upper classes, for at least 200 years—no swallows required.

So keep it up, Arthur. Perhaps you did find them, and the joke was on us after all.

*This article is based on research to be published as “The Medieval English Coconut” in a forthcoming issue of the journal The Medieval Globe.