All Our Dreams Are Coming True: M.O.D.O.K. Is Getting a Romance Arc In New Mini-Series 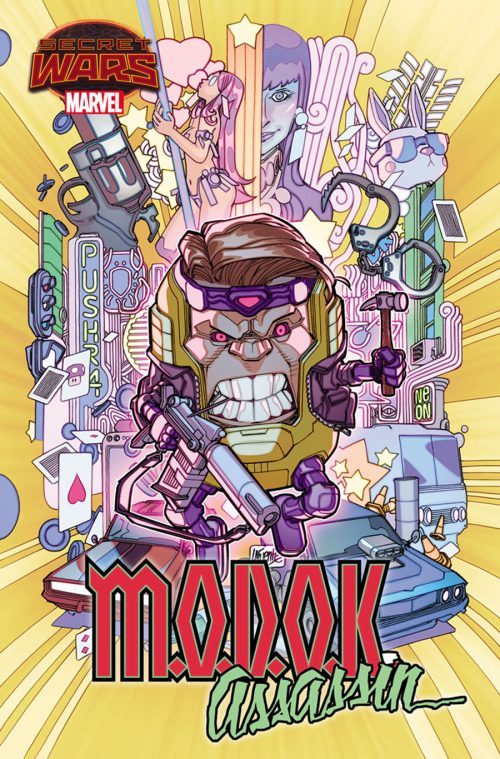 Remember when some genius Internet denizen started to rewrite Fifty Shades of Grey, but with the Mechanical Organism Designed Only For Killing in the role of Christian Grey? Well strap in, because it’s happening for realio now! Okay, not so much the bondage, but in the upcoming M.O.D.O.K. Assassin mini-series by Chris Yost and Amilcar Pinna, our favorite mutated supervillain (sorry Krang) is going to fall in loooooooove.

Chris Yost explained the Secret War tie-in, which will revolve around M.O.D.O.K. being stranded in a part of the Battleworld called “Killville,” to Comic book Resources:

At the end of the first issue the full-on big story comes into play, and that’s when we get into the romance portion of the story. This is M.O.D.O.K. — who is designed, of course “only for killing” — coming across somebody that he actually doesn’t want to kill. That decision will hurt him. He’s going to suffer for this decision and this girl that he meets. He’s basically found a girl that’s just as, if not more, deadly than him. He’s going to fall head over heels in love with her.

Yost also disclosed that the object of MODOK’s affections is an established Marvel character, but not Elektra, and that it “will put him in the crosshairs of some of the biggest players in Secret Wars.”  If it’s Black Widow or Gamora, I will buy every copy. Every copy.

Regardless of who the lucky lady turns out to be, I’m pretty excited that soon the K in M.O.D.O.K.’s acronymic name will stand for “Kissing”. Which, of course, is yet another acronym that stands for “Killing Innocent Souls Seriously Is Neat, Guys.”

…listen, they can’t all be winners.