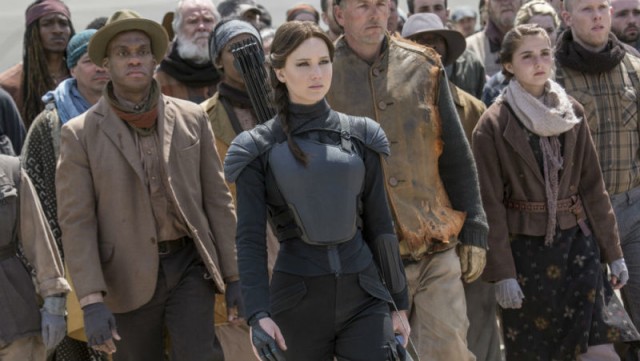 I love the Hunger Games series – both the books and the films – but even I kinda gave Mockingjay, Part 1 some side-eye, because it really felt like the first part of a story, rather than a film in and of itself. Apparently, the director of the film, Francis Lawrence, and the film’s producer, Nina Jacobson, genuinely feel that the split of the final Hunger Games book was necessary story-wise. And no, it doesn’t have anything to do with money.

In an interview with io9, Lawrence explains that the division of Mockingjay was based on the story’s themes:

His decision also had a lot to do with wanting to separate his work from that of the director of the first film, Gary Ross:

I think I worried about repetition more with Catching Fire than I did with Mockingjay 1 or Mockingjay 2. Just because there were going to be a lot of events in that film that we had seen [in the first film]. There’s going to be another Reaping! There’s going to be another train trip to the capitol! Training in the capitol! Tribute center! A parade! And so, really it was like, ‘Wow. How do I go through this one and make it feel different from the first time around?’ Whereas once you hit Mockingjay 1, the story completely changes.

Meanwhile, Jacobson also sees the separation based on themes as an important one:

I always found this last chapter was about transition. In the beginning, [hero Katniss Everdeen, played by Jennifer Lawrence] volunteered for her sister. She is threatened into a circumstance where she’s always had to decide how to react toward the script that’s been given to her. And [at last], this is the movie where she’s off book. She has to improvise, she has to lead, she has to make it up as she goes along, and she has to live with the consequences of those choices. She has to know what it is to be a leader. Seeing that character grow into her own and take charge of her voice and destiny is very satisfying to me. And that was the important thing in this one. That and a sense of completeness. I really wanted you to feel we had totally completed the story.

There was also the issue of one character in particular – President Coin (played by Julianne Moore), who is a big part of the book, but wasn’t as large a part of Mockingjay, Part 1. Lawrence explains:

We wanted to make sure that there was an evolution for Coin. One of the things we worked on was this idea that [Coin] kind of really did believe in the system of [District] Thirteen. She dressed like everybody else and believed in the system of rules that were in place… And you can see there’s a visual change with hair, makeup, how she dresses, there are emotional changes with her, [and] obviously political changes with her, but that was something that we really mapped out carefully over the course of the two movies.

Whereas in the book, since we’re getting everything from Katniss’ point of view, we know from the beginning that Katniss has a bad feeling about Coin, and so our view of her is a bit colored. I get that. I also get the other stuff in the piece about allowing for large set pieces, and allowing other story elements room to breath and evolve.

But at the same time, I’ve always believed that limiting the length of something encourages creativity. Rather than allowing something to become bloated for the sake of fitting in every single thing you want, limiting the script allows you to boil the story down to its essentials and be creative about how you include them, which makes for tighter storytelling. That’s what I think, anyway.

Check out the rest of the in-depth interview over at io9, and then tell us what you think? Do you think they did the right thing by splitting up Mockingjay?