The Hunger Games: Mockingjay Part 1 Is The Best Film In The Series So Far

This incomplete but promising film is definitely only part of the story. 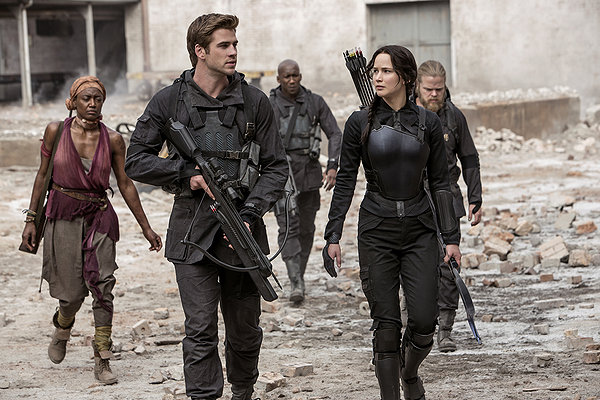 The Hunger Games films have been an interesting example of an incredibly successful series where the films progressively improve with each installment. They’ve all been flawed; I wasn’t an especially big fan of The Hunger Games, and found Catching Fire to be inconsistent and repetitive of the first. Often, the films seem to have been made as companion works to the books, rather than as complete, stand-alone features with their own interpretation of the source material. And though some of these issues remain in Mockingjay: Part 1, it is certainly the best of the films so far, and leaves me excited to see its conclusion.

The following contains mild spoilers for the film.

First of all I should say: this is not a singular, stand-alone film, and there is never a moment when you don’t notice the fact that the filmmakers have been forced to stretch the story into two films. This is a trend in movies I do not support, and one I really, really wish were over; it’s a waste of their audience’s time and money, and forces directors to avoid efficient storytelling with good pacing. As we had with The Twilight films and Harry Potter films, the first film of two has the undeniable feeling of using their time simply to set up a second, entirely action-oriented second film.

That being said, of the films to follow this recent trend, The Hunger Games: Mockingjay Part 1, is the best. Part of this is because the first two films did such a terrible job setting up real characters, besides Katniss; this extra time gives the filmmaker an opportunity for audiences to connect with the characters who have been on the perimeter over two films. Additional time with Gale (Liam Hemsworth), Prim (Willow Shields), and Haymitch (Woody Harrelson) is a welcome use of the film’s two-hour running time. Each character, even ones I had very little interest in previously, is given a moment to define their personality. The fact that this film has ultimately no requirement to get to another Hunger Games allows the focus to truly be on other events which will move the series story forward and build anticipation. 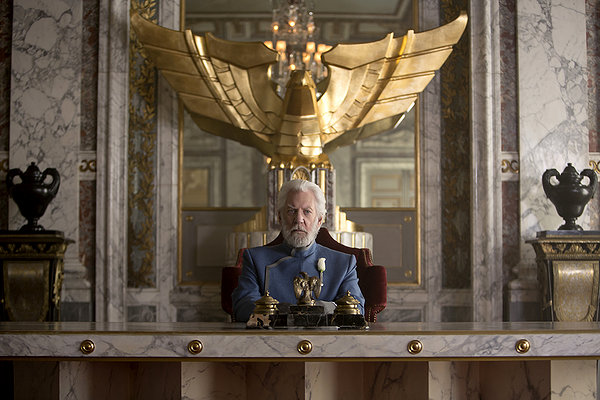 This film has a new energy to it, which makes it an unexpectedly refreshing entry into the series. Donald Sutherland’s Snow has always been the most interesting character in these films, and it’s wonderful to see him with a bit more to do. Likewise, the ability Jennifer Lawrence has found in the progression of these films to give Katniss true emotion, and the loss of Lawrence’s initial stiffness in the character, shows that she isn’t just a good (maybe even great) actress, but is improving with experience. The same goes for Josh Hutcherson as Peeta, an actor with screen presence and who, in three films, has considerably improved as an actor.

As for Liam Hemsworth’s Gale, honestly – I really couldn’t give a damn. I barely remembered him in the previous two films, and despite one good moment for his character in this latest film, I have no interest in his character and even less in Hemsworth’s leaden performance. Particularly with the more engaging Sam Claflin’s Finnick just hanging around, with little to do until, in the single best moment of the movie, he is finally given a monologue. Unfortunately director Francis Lawrence choose to cut the monologue into an action sequence featuring Gale, despite being the perfect opportunity to use voice over effectively. How often will you hear a critic express a desire for that over-used device?

The movie has multiple moments which work well (none great), but they never come together because of how much is being held for the second film. Small moments in the other districts work to create tension and suggest a build up to a big battle, but that’s because the military strikes and executions are done as single sequences, rather than intertwined with the rest of the story. Julianne Moore’s District 13 President Coin is fantastic, and I can’t wait to see where she takes the character.

I will say thatmaking a true political-military movie for teens, and this time not shying away from the big issues of propaganda, fear, and dictatorships, shows a confidence in the audience I really appreciate, and felt absent from the first two films. At times you can see the visual influences from political films of the past, such as Metropolis and Battleship Potemkin. Nothing close to those masterpieces, of course, but a cinematic awareness and appropriate homage. The visual flourishes have been toned down, so minor elements standout, such as the tattoos on welcome addition Natalie Dormer. Even the score is thankfully reserved for an action movie. As for the action in the film, it could have been better, but it isn’t terrible either, and most sequences are appropriately brief. I will say, however, that Francis Lawrence should have found a way to film an important scene on the stairs with enough light to actually see the characters. And someone needs to stop the combined use of shaky cam with handheld camerawork. It is overkill in the attempt to feel real, and I find it distracts and pulls me right out of the narrative. Pick one! 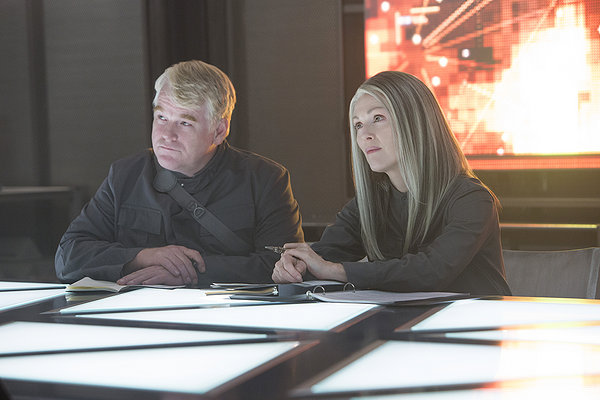 I understand that the desire it to give the scene a docudrama sense (like The Bourne Effect), and there is some logic to film scenes about the aftermath of war that way, to draw connections to the wars and rebellions we’ve seen on TV and the internet. And those blunt parallels to real life military and political uprisings from the not-so distant past and the film’s near-future destiny is the greatest strength of the film. The writing team of Danny Strong and Peter Craig, after last year’s limp The Butler, are back with the socio-political awareness which earned them Emmys for Game Change; although there is some dialogue, particularly given to Katniss and Gale, which should have had a rewrite.

But the respect and maturity of the writing would suggest the audience could have accepted a slightly longer, but also denser movie by having one film for Mockingjay, rather than two. We’ve had a year of two-plus hour movies which begged for editing. This is a movie which feels long and slow, simply because they were forced to stretch scenes out unnaturally. The Hunger Games: Mockingjay Part 1 is a movie which feels almost impossible to review, because I really do feel as if I’ve watched one episode of a two part miniseries. I have a good feeling for the films so far, but if the second film is an ultimate failure, this film ultimately failed to build to the proper conclusion. If I had to give this film a grade in school, it could only receive an incomplete.