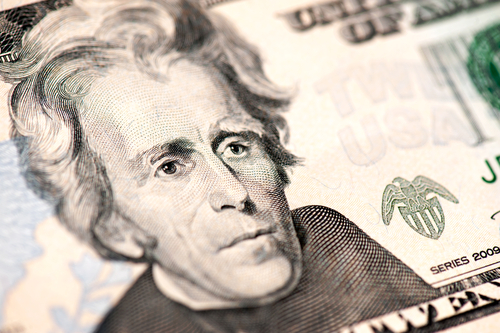 Back in 2016, then-Secretary of the Treasury Jacob J. Lew announced that the U.S. government would be significantly reworking the design of its currency. Harriet Tubman was slated to appear on the front of the $20 bill, with genocidal slaveholder Andrew Jackson moved to the back of the bill alongside a picture of the White House. However, the Trump administration has repeatedly refused to commit to the changes, being evasive when asked about the plans and lamenting the switch as “pure political correctness.”

During a recent interview at the Economic Club in Washington, Treasury Secretary Steve Mnuchin continued to dodge the issue, saying, “We haven’t made any decisions on whether we will change the bill or won’t change the bill.” He’d been similarly evasive in August 2017, saying, “People have been on the bills for a long period of time, and this is something we will consider. Right now, we’ve got a lot more important issues to focus on … Ultimately we will be looking at this issue. It’s not something I’m focused on at the moment.”

However, as of September 2017, the Treasury Department’s Bureau of Engraving and Printing told Bloomberg that it was “still following current guidance” and proceeding according to the Obama-era plans. “The redesign of the next currency series is still in the early stages,” said spokeswoman Lydia Washington, “and the Secretary of the Treasury approves all final currency designs.”

Tubman’s recognition wasn’t the only announced change. According to Lew’s released plans, the $10 bill should eventually include Lucretia Mott, Sojourner Truth, Susan B. Anthony, Elizabeth Cady Stanton, and Alice Paul on the back of the bill, with Alexander Hamilton remaining on the frontside. Abraham Lincoln would still appear on the front of the $5 bill, but the reverse would honor historic moments in the civil rights movement which took place at the Lincoln Memorial. The changes were originally planned for 2020, to celebrate the centennial of the 19th Amendment, but the Trump administration has pushed them to 2026, citing the need to address counterfeiting and “security concerns.”

Now, I know this is hardly the worst of the toxic changes that the Trump administration is making. Replacing Jackson with Tubman is largely a symbolic move, one that comes without immediate, concrete benefits for black women in the United States. Tubman’s image would still be printed on a currency that’s minted by an administration which overwhelmingly employs white people, particularly white men, and in which people like Stephen Miller and Jeff Sessions hold high-level positions. Tubman would still have to share the bill with Jackson.

But the Trump administration’s petty refusal to concede to the change shows just how deep and how stubborn their opposition to the visibility and celebration of minorities is. Even the smallest, policy-neutral acknowledgement of an undisputed American hero like Harriet Tubman is ground that can’t be ceded, because she’s a black woman whose recognition was ordered under a black president. As with so many Trump administration actions, this one’s revealing.