The senate majority leader laughed when discussing COVID-19 relief in his debate with challenger Amy McGrath. 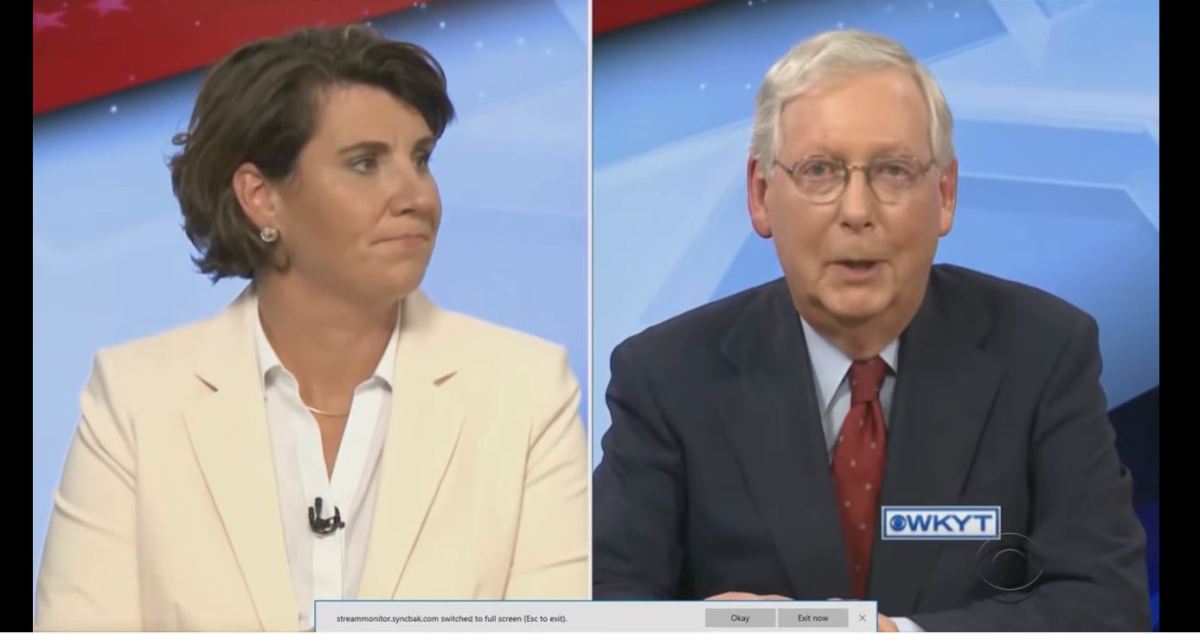 Last night, Senate Majority Leader/sentient confederate flag Mitch McConnell and Democratic challenger Amy McGrath shared the debate stage in advance of November’s election. During the debate, McGrath called out McConnell for the senate’s lack of action on COVID-19, saying “The House passed a bill in May and the Senate went on vacation, … You just don’t do that. You negotiate. Senator, it is a national crisis.” McConnell’s response was a grumbling, Palpatine-style laugh in the face of denying relief to millions of Americans.

McGrath continued, “Sen. McConnell built a Senate that is so dysfunctional and so partisan that even in the middle of a national crisis he can’t get it done, … For that reason alone he should be voted out of office.” Of course, this is hardly news. Mitch McConnell’s calculated cruelty has stymied the senate for years now. It’s evident in every move he makes that he has zero value for the lives of real Americans or of the over 210,000 lives lost to the coronavirus. But that ghoulish laugh is enough to send a chill anyone’s spine. It’s also a harsh reminder that this callous 78 year old fossil has the power to completely hold up our country.

I know there are more important issues than McConnell’s Disney villain giggle, but I can’t help but think that this laugh encompasses everything that is rotten with the Senate Majority leader. His condescension, his ignorance, and his dismissiveness of the former Marine combat pilot is a micro example of his complete lack of compassion and care for anyone who isn’t a billionaire republican. And the fact that he’s not even PRETENDING to care is an indictment of his outsized power in the government.

Many took to social media to call out the chilling laughter of McConnell, which would be more at home in a horror film than on a debate stage:

Over 200,000 Americans are dead. McConnell’s laughter is just grotesque here.

We must flip the Senate and get leaders who take this pandemic seriously. https://t.co/uaQmHhlnej

McConnell’s gleeful laugh when McGrath talks about his failures on COVID is…something pic.twitter.com/axoFqqGG8D

Laughing at 220,000 dead? How does Mitch McConnell sleep at night?

Last night’s Kentucky Debate between @AmyMcGrathKY and Mitch McConnell provided lots of info for the voters of Kentucky, while giving Mitch McConnell many opportunities to inappropriately laugh and chuckle about serious issues he has failed to handle: https://t.co/nsEFYXclBK

Trying to figure out what he is laughing about. pic.twitter.com/1bF0TuOBzy

Mitch McConnell LAUGHS when called out for his lack of action on COVID. #KYSen

“If you want to call yourself a leader you got to get things done.” pic.twitter.com/dHbXDf28OQ

McConnell’s gleeful laugh when McGrath talks about his failures on COVID is… what pure evil looks like.#Chilling https://t.co/gJqfhVsDRg

Wow … how do Kentuckians keep re-electing someone who drips with so much contempt for them, for their lives and health, and for the elections process? I truly don’t get it, Kentucky. Is this your king?? https://t.co/wX9Reh6He9