Brainput Can Tell If You’re Trying To Multitask, Tells A Computer To Help You Out 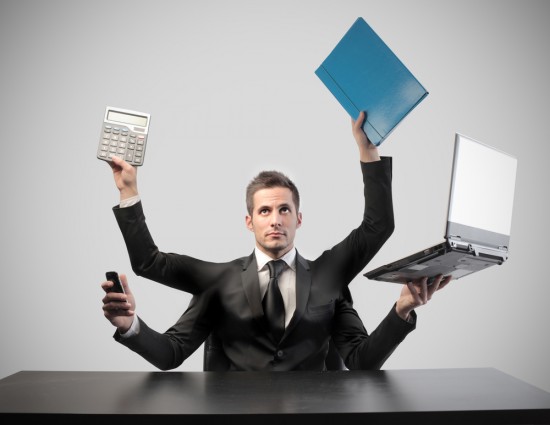 Computers can be great at helping you accomplish things faster, but that effect really breaks down when you start trying to use computers to help you accomplish, like, forty million things at the same time, also known as multitasking. Computers can multitask on their own, but can they help you multitask out there in the real world? Brainput, a project spearheaded by MIT researcher Erin Treacy Solovey, strives to do this by monitoring your brainwaves and offloading some of the work you’re trying to multitask to computers when it notices you’re starting to freak out a bit.

The system works by using functional near-infrared spectroscopy, which is a more portable, less intense version of fMRI. Basically, what it amounts to is a headband you wear that is able to read your brainwaves enough to tell if you’re trying to multitask or not. If you are, it kicks into action and starts some computers helping you out.

You’re probably thinking, “how does it do that?” Brainput isn’t smart enough to read your mind and realize you’re trying to do some math in your head or something; the tests took place in a very specific enviroment. A user outfitted with Brainput was instructed to try and solve two little mazes simultaneously and when Brainput detected serious multitasking, it had computers engage some slight auto-navigation; slight enough that the user’s performance improved, but they didn’t necessarily feel like they were being assisted.

That being the case, the application of this technology has a sort of limited scope. That is to say, it can be used effectively as an on-off switch for computer assistance that is already there, but it can’t dynamically figure out anything about what the user is multitasking, just that they are. Still, this tech could be useful when it comes to intelligent cars that might not be able to drive on their own, but could definitely make you less likely to have a head-on collision during those three seconds after you spill soda all over your lap.

The question is, if there’s subtle help available, help that can make your life easier without completely stealing your sense of agency, wouldn’t you want it on all the time? Granted, maybe it only seems subtle when you’re multitasking, but still, automated assistance seems like something could easily be handled with an “opt-out” style toggle switch. How often don’t you want help, that is, so long as it’s really help. That said, the tech is pretty impressive. I’m not sure how far I’d really want my computer to be able to look into my brain, but just far enough to tell I could use a little help with something probably isn’t too far. Maybe some day it can learn how to notice I need a hug. And also grow some arms.

(via ExtremeTech, image via Shutterstock)