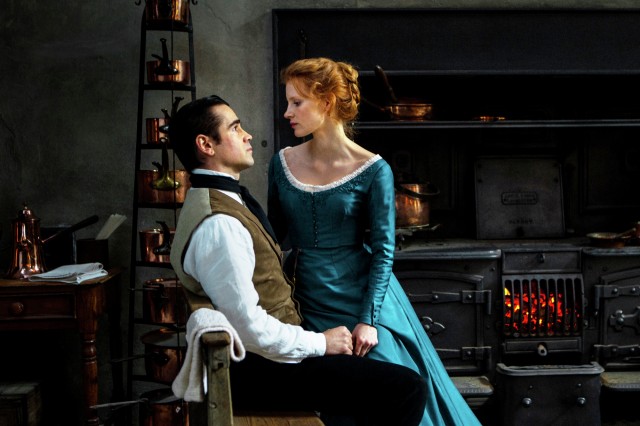 If you’re interested in the history of film, you should get familiar with Liv Ullmann. Not only is she one of the most iconic stars of her days, but she is one of the most interesting figures in film history. Once attacked by the public for not advocating as a feminist, she later became a a feminist activist. She was a muse to one of the most influential directors in history, and a protege who became a director in her own right. Now, at 75, she’s directing two of the greatest living actresses working today: Jessica Chastain and Samantha Morton.

Jessica Chastain has had an interesting year. The two films for which she is being promoted for best actress and best supporting actress are The Disappearance of Eleanor Rigby and Interstellar, neither of which I loved; I think the best chance at an Oscar this year will be in A Most Violent Year. As for Miss Julie, in which Chastain plays the leading role, she shows many moments of brilliance – but there are also moments where she goes off the rails a bit, struggling to convey Miss Julie’s madness.

Miss Julie is a very close adaptation to the naturalistic play by August Strinderg. As the play says, the film takes place on a single midsummer’s Eve, when the head of a manor has left for the day, leaving his daughter, Julie, alone with the servants. On the day of the servants’ dance, she asks to dance with Jean (Colin Farrell), the valet. Jean claims to be “engaged” to Christine, the plain and religious cook. Miss Julie’s claims to want to dance are, of course, attempts to flirt with Jean; she’s a woman desperate for sexual satisfaction with a man she is attracted to but who is beneath her station, going slowly mad alone in the house. And Julie doesn’t simply flirt with Jean; she uses her power in the house to sexually harass and pressure him. Meanwhile, Christine is also in the house, growing gradually more and more disgusted by their behavior.

Ullmann’s adaption is very close to the source material – particularly the performances, which seem to be based on theatrical productions. Chastain has experience as a theater actress, and her skill of commanding a scene is put to good use her. The torture of being sexually mature with no outlet reads across her gaunt face. Only when she is applying pressure to Jean does Julie seem to be enjoying life even a little. But occasionally, when madness has to be expressed while screaming with a knife in hand, or crying, Chastain loses touch with the character. Perhaps that is the challenge of transitioning a play to a film; the way a scene would be played in on a stage with a live audience can’t be played the same way in an on-screen close-up.

I really like Colin Farrell, especially in last year’s Saving Mr. Banks and Seven Psychopaths. But again, his big theatrical moments in Miss Julie needed to be toned down a bit to fit the play’s naturalistic tradition. In the scenes when Farrell is hyperventilating and stuttering, it seems a bit mannered; especially compared to the ease he has playing a dinner scene with Morton early in the film, or when he can show his character’s true colors as a cad. For me, Morton as Kathleen really is the standout here; like in so many of her performances, she knows exactly how to use the intimacy of a camera to do less while expressing more. And when she comes in for her final, massive monologue, she pulls all focus, despite how little she appears to be doing.

Ullmann wrote the adaption of the play, and she pays respect to the original work. When the story is focused on the games of sexual politics (Miss Julie with her power and wealth, Jean as a man in the 19th century), Miss Julie is fascinating to watch; you really see how Ullmann pulls contemporary ideas into this work written in the 1880s. But when the relationship is consummated, the film falls prey to an almost endless feeling that we’re running in circles. While some of that is intentional, showing the lack of possibilities for women and servants at that time, at 133 minutes some trimming may have been necessary. It is also unfortunate that we are limited in what we see, particularly when Christine disappears for lengthy sections of the movie. There are only three actors in the film, and when a vital part goes missing, it can be difficult.

Turning any play into a feature film, especially one written to take place in a single location, can be a challenge; but wisely, Ullman does not limit the locations in the film, showing much more than the original play ever could. There are moments, however, when you sense that scenes were added or changed simply to have a new location in which to film, to give us a break from the kitchen, where the play takes place. But in Ullmann’s faithfulness to the material, she seems unwilling to use the camera in as expressive a way as she did in Breathless or Private Conversations, and really make this her own. The play has been adapted many times on stage, setting it everywhere from an office building to Tennessee Williams’s south.  So why do such a traditional adaption of the work? Watching the film, it feels as if Ullmann takes no ownership in the material, and is bringing the work to the cinema as August Strinderg’s vessel.

The sets and costumes are lush, each expressing the period and something about the characters (I was an especially big fan of the clothing they gave Morton, which is plain and unfitted until she puts on her modest church clothing). And the estate they filmed on is a stunning piece of architecture with natural beauty to express Miss Julie’s desire for escape. But for a movie in which there is considerable talk of the summer heat and overwhelming passion, there is very little fire or passion behind this respectable but clinical production.