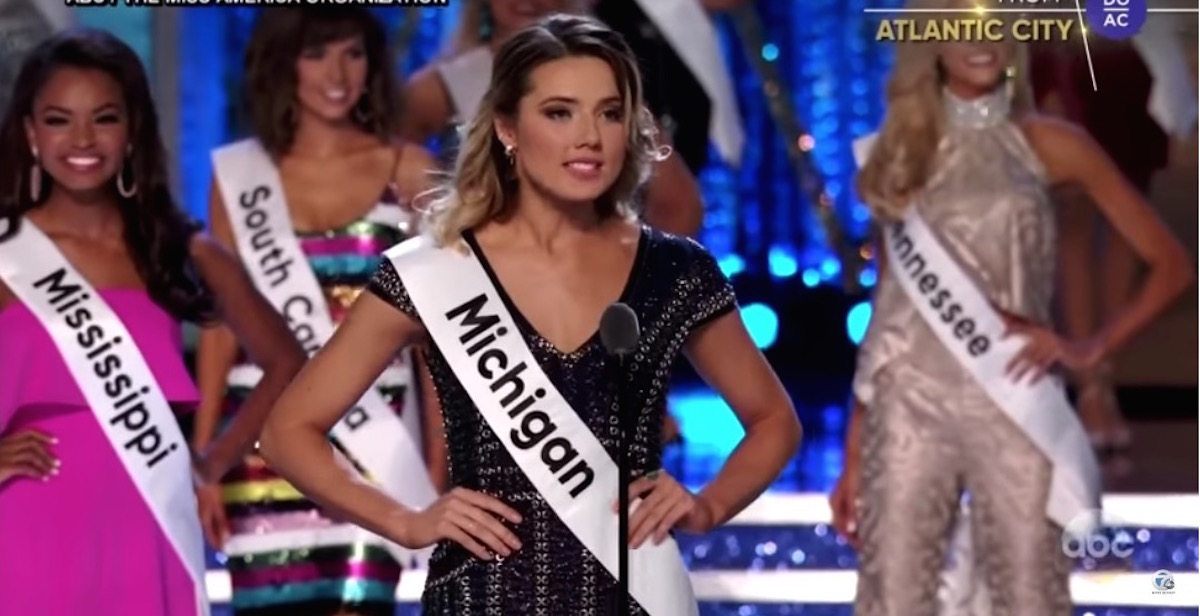 This weekend was the 2019 Miss America competition, and while the winner was Nia Franklin, Miss New York, she’s not the only contestant who’s been making headlines. Each had just two seconds to introduce themselves to the judges and audience, and here’s how Emily Sioma, Miss Michigan, used them:

“from the state with 84 percent of the u.s. fresh water but none for its residents to drink, i am miss michigan emily sioma” — the new #missamerica2019 pageant did not come to play pic.twitter.com/H05eifix2e

“From the state with 84% of the U.S.’ fresh water but none for its residents to drink, I am Miss Michigan, Emily Sioma,” she said.

It’s been more than four years since the severe water contamination in Flint, Michigan’s water system was discovered. A number of officials are facing charges related to the water crisis, but that doesn’t help the estimated 100,000 people—including 12,000 children now at risk for developmental difficulties—believed to be exposed to lead in the water, or the Flint residents still using bottled water for all their needs because they understandably don’t trust the safety of the water coming out of their taps.

This has been happening for four years, and the rest of the country’s investment in this crisis is disturbingly lax. So well done, Sioma, for finding a way to make those two seconds matter.

This was the first Miss America competition (no longer a pageant) since the organization underwent a massive rebranding and internal restructuring. Late last year, a number of emails were leaked showing the disgusting ways in which the pageant’s CEO, Sam Haskell, and others within the organization talked about past contestants and winners. The emails included slut shaming, misogynistic slurs, and discussions of plans to sabotage women’s careers. Haskell and other executives and board members stepped down, and former titleholder/Fox News anchor Gretchen Carlson took over.

In June, Carlson announced the new look of the competition, most notably axing the swimsuit competition. The goal was to stop judging women by their physical appearance, and Carlson promised the competition would focus more on their inner substance. The swimsuit segment was replaced with an interview portion, and the women didn’t shy away from getting political. In addition to Sioma’s bold introduction, Madeline Collins (Miss West Virginia) was asked what she thinks the biggest issue is currently facing Americans, and she answered “Donald Trump.”

With only 20 seconds to respond, Collins told the judges, “Donald Trump is the biggest issue facing our country today. Unfortunately, he has caused a lot of divide in our country, and until we can trust in him and the choices that he makes for our country, we cannot become united.”

The winner of the interview portion was Gabriela Taveras (Miss Massachusetts), who was asked how American tourists should interact with foreigners abroad. She said we should let them know that “we as Americans are supporting them and that we are there to help them.”

In a preliminary interview, Emili McPhail (Miss Virginia) defended NFL players’ right to kneel during the National Anthem, saying, “Kneeling during the national anthem is absolutely a right that you have, to stand up for what you believe in, and to make the right decision that’s right for you.”

She then added, “But it’s also not about kneeling; it is absolutely about police brutality.”

Following her win, Nia Franklin spoke to reporters about being the first woman to win the competition post-swimsuit segment and said the new changes will be “great for our organization.”

“I’ve already seen so many young women reaching out to me personally, as Miss New York, asking how they can get involved, because I think they feel more empowered that they don’t have to do things such as walk in a swimsuit for a scholarship,” she said. “And I’m happy that I didn’t have to do so to win this title tonight, because I’m more than just that. And all these women onstage are more than just that.”