Review: The Intersectional Feminism of Misbehaviour Is Its Greatest Strength 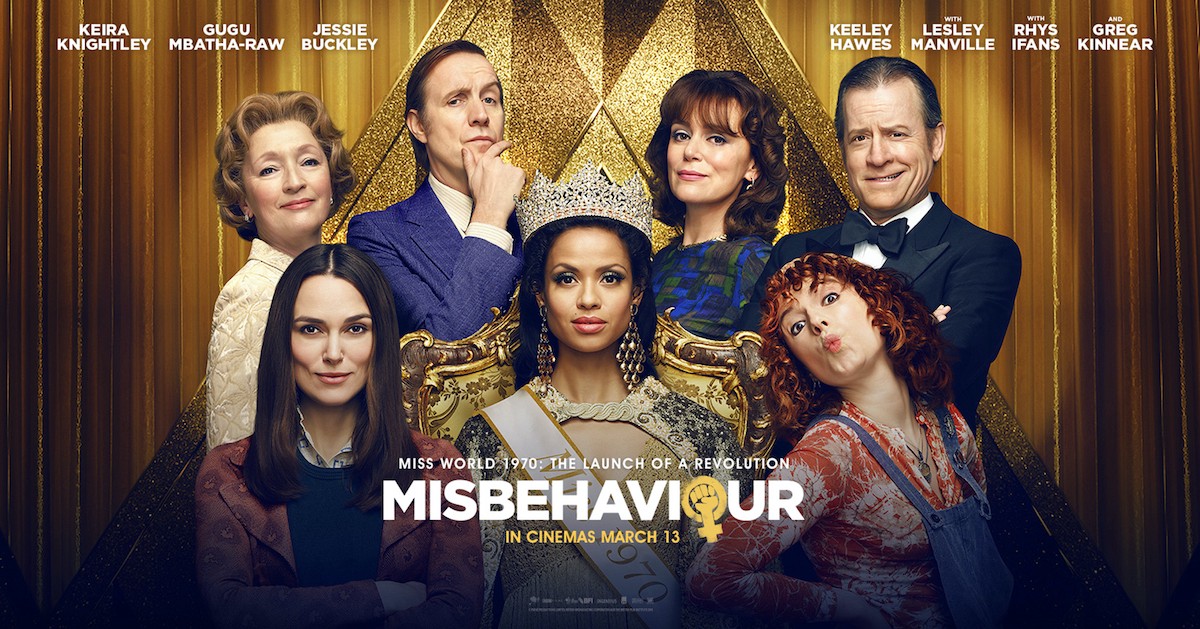 Bizarre, unsparing comedy Misbehaviour, directed by Philippa Lowthorpe, is inspired by the true story of the feminist protest against Miss World 1970 in London. Forty years ago, a group of women disrupted the 20th edition of the popular pageant and wound up in jail.

Keira Knightley leads the cast as Sally Alexander, an activist of the Women’s Liberation Front who enrolls at University College London. Sally, a mother of one, tries to juggle her private as well as her academic life and becomes involved with the more radical faction of the movement, fronted by a charismatic Jessie Buckley as Jo Robinson.

Misbehaviour, in cinemas now in the U.K. and awaiting a U.S. release date, sheds light on the vile sexism women were supposed to swallow “back in the day.” To no one’s surprise, that old-school sexism turns out to be eerily similar to that of the immediately pre-MeToo era.

On the other hand, men at all levels—Bob Hope, Mr. Miss World, Sally’s professors, the entitled male students—are despicable if not overtly slimy, sexist characters. Nonetheless, Misbehaviour shows examples of male activists wanting to smash the patriarchy just as much as women do, proving it shouldn’t be a one-sided conversation.

Misbehaviour is a nuanced movie, focusing on women on both sides who are equally victims and fighters for better living conditions. Keira Knightley’s character perfectly captures the struggles of working mothers, torn between responsibilities and ambitions. Knightley herself has been outspoken about dealing with childbirth and motherhood while being a professional in any industry.

Uneasiness permeates the movie. When the camera pans over the contestants’ butts, dwelling on those swimsuit-wrapped bodies for a full 30 seconds, you almost wish you could look the other way. If you think this objectification via camera is a thing of the past, you might want to rewatch the interminable scene focused on Margaret Qualley’s bum in Once Upon A Time in Hollywood, released last year.

Written by Gaby Chiappe and Rebecca Frayn, Misbehaviour is excellent at not pitting women against each other. The movie takes what could be easily a progressive vs. superficial women narrative and turns it into a compassionate tale of sisterhood. This is the film’s greatest perk, balancing out the fact it’s entertaining in a lowkey, not extremely original manner. Misbehaviour isn’t just a feminist movie; it’s an intersectional feminist film that touches on racism and social injustice.

There is a real effort not to portray the contestants as shallow. They’re matter-of-fact, pragmatic women, well aware that their appearance is the only tool allowing them a shot in life. This feels especially true for contestants of color, such as Miss Africa South Pearl Jansen (Loreece Harrison) and Miss Grenada Jennifer Hosten (Gugu Mbatha-Raw). Every contestant, even the seemingly annoying Miss United States (Suki Waterhouse), shines in a moment of honesty that’s hard not to relate to.

Ultimately, it doesn’t matter the size, color, and style of someone else’s shoes—an object traditionally linked to womanhood, one which the movie puts a particular visual emphasis on. Misbehaviour proves it’s not only possible but necessary to try to fit into them.