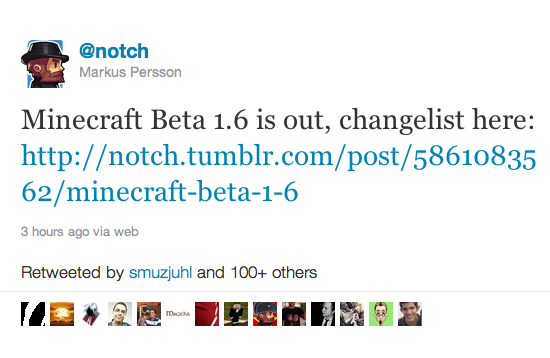 Notch has not disappointed: As promised, he has released Minecraft Beta 1.6 unto the world, and it has a whole slew of new changes and bug fixes. As we mentioned earlier this week, the biggest additions are functional Nether in multiplayer and the addition of craftable maps and hatches, but a few of the changes and bug fixes, like the nerfing of fire, will change the experience of playing the game. Also, be prepared: Doors making sounds for other players in multiplayer is potentially kind of annoying.

Here’s a list of what’s new in Minecraft Beta 1.6.

To download 1.6, simply launch your current version of Minecraft, have a working Internet connection, and weep silently as your night-spawning animal/corner-spark butchering farm ceases to work.

Below, recipes for the trapdoor and the map:

Remember, the recipe for paper is three sugarcanes (formerly known as reeds) in a row.

Notice that you get two of these per crafting session.

(via Notch. Recipe screenshots from this video.)