Like me, I’m sure you wish you were at MineCon in Las Vegas right now instead of sitting at work on a Friday, waiting for the official release of Minecraft 1.0. The event proper starts at 10 a.m. PST, but the real fun doesn’t get started until around 1 p.m. when Minecraft 1.0 is due to go live during Notch’s keynote speech. Later on today, at 4 p.m. there’s a Scrolls and Cobalt demo and there’s even more planned for tomorrow including the Mojang Developers’ Panel at 11:15 a.m., a Yogscast Panel at 1:30 p.m., and closing ceremonies of some sort at 5 p.m. I’m really not making things any better for either of us, am I?

Also, check out this righteous swag MineCon attendees are getting: 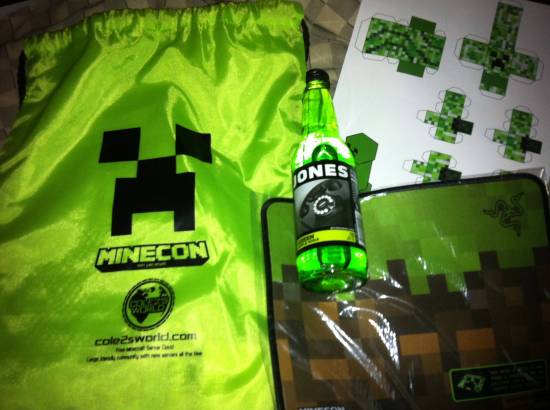 I could probably do without the paper creeper, or the soda, but that drawstring backpack looks pretty awesome. After all, how much closer can you get to a Creeper cape without, well, actually wearing a cape. The good news is that since you and I aren’t at MineCon, we can just sit around playing 1.0 when it comes out without feeling like we’re missing out on some kind of once-in-a-lifetime opportunity. I mean, we are, but we already made that decision a while go, so whatever.

Of course, if you want to try and pretend like you are there, IGN has an exclusive livestream. I wouldn’t blame you for watching it. I know I will be. Happy MineCon everyone. Enjoy the last few hours of Minecraft Beta while you can.