The Mindy Project Skewered “Nice Guys” and We Want More 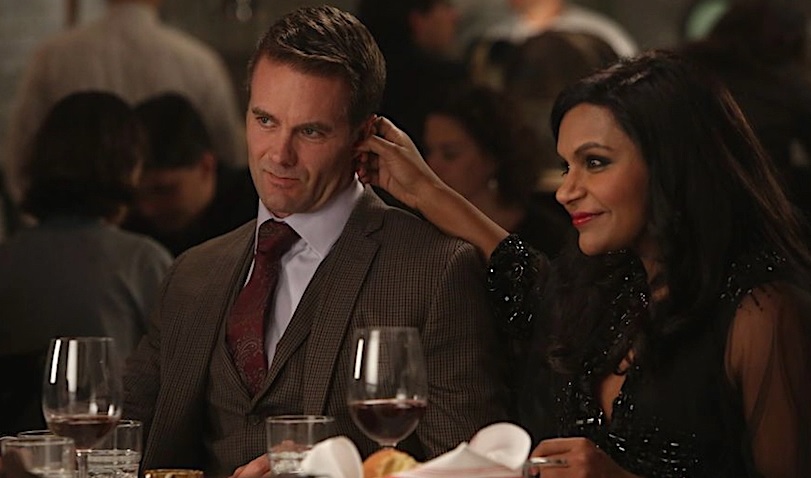 In my middle- and high school years, this was considered an enlightened thought. Here are these nice, sweet, funny guy friends who would make such great boyfriends, clearly better boyfriends than those jerk guys we liked. But us girls just “friendzoned” these nice guys! Shame on us! If only we’d just give them a chance!

During college I read more about this phenomenon from a different perspective. Nice Guys: people who feel they are entitled to relationships, because they have been such a good friend to someone they’re interested in, romantically and/or sexually. I felt a weight lift off of me: this is what I’d experienced. This recent viral tweet clarifies who’s in the wrong:

You think getting friend zoned is bad, imagine your creepy male friend thinking you owe them sex.

Season 5 of The Mindy Project recently premiered, and their big, episode-closing joke, turned the joke on these Nice Guys.

At the end of season 4, we left Mindy (Kaling) choosing between two guys: Danny (Chris Messina), her ex-partner and father of their son, Leo; and Jody (Garret Dillahunt), another doctor at her practice, a “southern gentleman,” a friend who has fallen in love with her, and, without asking, bought her the apartment directly above hers, so she can have space for her young son.

But Mindy Project is a modern romantic comedy show, and often subverts tropes you’re sure it’s headed for. Mindy has an epiphany in the season 5 premiere, and decides neither of these guys is the answer. Mindy realizes that a long term relationship with Danny will never truly work, and that she doesn’t “feel a spark” with Jody. She tells Danny, and they peacefully part. She tells Jody, and he flips out at her, and reveals himself as…not so nice.

The writers really nail the Nice Guy type with Jody’s reaction. When Mindy tells him she doesn’t want to be with him or Danny, he can’t comprehend it. She explains she’s choosing to be single, and asks gently if they can still be friends. Jody pauses, and we wait for a similar reaction to Danny. Instead, Jody angrily says no! “A good friend would’ve fallen in love with me!”

He goes on to say that even an OK friend would’ve had sex with him, given the time and money he spent trying to woo her. But then he stops her as she leaves his building, in the rain, as the music swells…and then he verbally harrasses her on the street, from his balcony window, warning all men to avoid her because she’ll lead them on. And that her “boobs are small.”

It’s so on the nose, it’s hilarious. It mixes rom-com reality with the actual real world, and exposes the underlying terrible, rape-culture logic of the Nice Guy.

But as great as this is, it’s also serious: Mindy is completely taken back. This man has been kind to her, and generous and thoughtful. But now we see so much of that was motivated by what he wanted. While he feels cheated of sex and/or a relationship, she’s the one who’s actually been cheated of the friend and person she thought she knew.

This plotline brought me straight back to middle school. I had a friend group made up of mostly guys, who I’d taken a lot of theatre and band classes with. One of them had a crush on me, and when he found out I liked someone else, he convinced the rest of the group to drop me and harass me online. Overnight, I lost my friends, and I remember feeling especially sad I’d lost him. We really got along and had similar sense of humor. But I didn’t, to use another middle school throwback, like like him. I felt hazy and attacked. I couldn’t believe this, well, nice guy had turned on me because I’d “friendzoned” him.

But the bottom line is this: if someone doesn’t want to date you, that’s the end of the story. And if you pretend to be someone’s friend, all the while expecting something else, you’re not actually a friend.

Thank you, Mindy Project, for turning the joke around and illuminating a problem that a lot of young women have to deal with. It looks like Mindy will continue to deal with Jody; in subsequent episodes, he sets about selling the apartment he bought for her and discovers that she’s now seeing another man. I’m so looking forward to a second confrontation, where hopefully, Mindy can defeat the Nice Guy once and for all.

Molly Booth is a freelance writer and author of the YA debut, Saving Hamlet, out now from Disney-Hyperion. She writes books about Shakespeare and feelings. She was homeschooled through high school, which means she gained her Geek/Nerd/Dork Certificate at an early age. She lives in Portland, ME and has almost too many pets. Almost. Follow Molly on twitter and tumblr for more nerding.