Midnight Mass Manages to Combine the Horror and Beauty of Faith 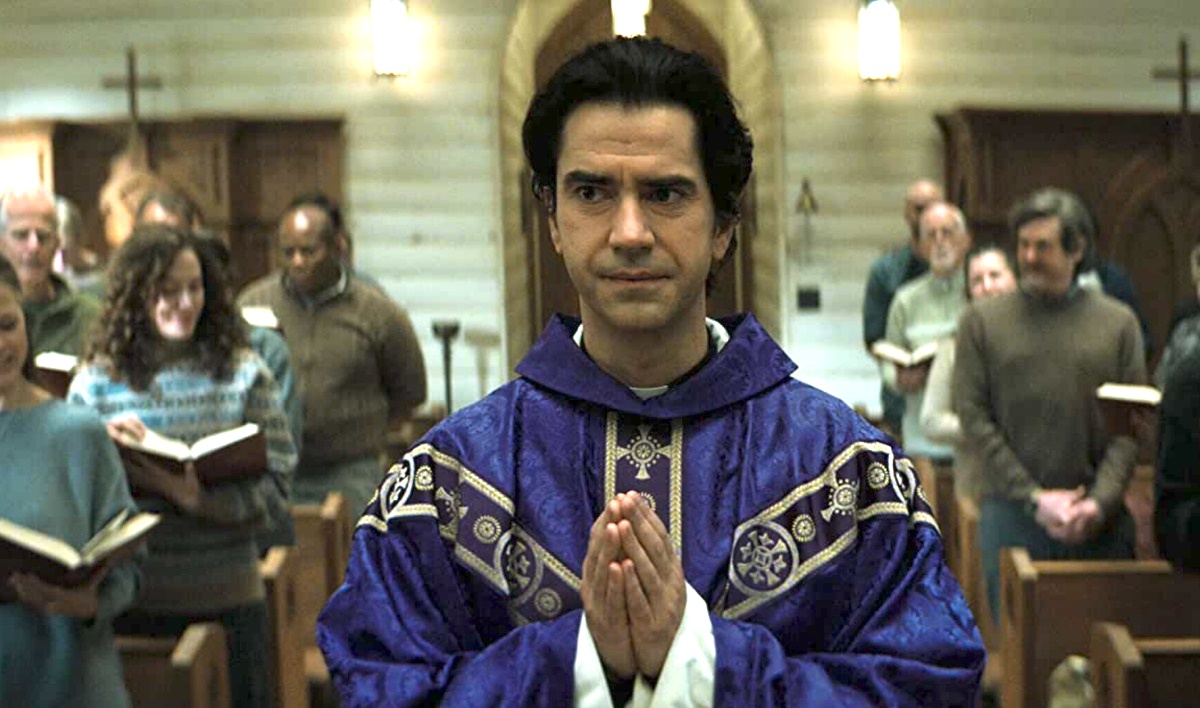 Midnight Mass is the latest horror miniseries from Haunting of Bly Manor creator Mike Flanagan, about an isolated religious community that begins to unravel as supernatural events unfold after the arrival of a mysterious priest, played by the engrossing Hamish Linklater.

QB1 Matt Saracen—ahem, excuse me, Riley Flynn (Zach Gilford) returns to his hometown of Crockett Island after spending four years in prison. He was in a drunk driving accident that resulted in a woman’s death, and naturally, she haunts him. This shook his faith in a way that puts him in conflict with his very religious family, but especially his father, Ed Flynn (Henry Thomas).

The island’s usual priest, Monsignor Pruitt, went on a trip to Jerusalem, and despite being expected to return, in his place is Father Paul Hill—who, slowly, after building the confidence of his flock, begins to preform miracles.

Naturally, there is a dark twist to this, and the miracles are not what they seem.

I really dug Midnight Mass, although it is not something I want to revisit as a whole. The deep conversations about faith are some that I’ve had with myself, and the casual cruelty of even the “nice” Catholics reminded me of why I have come to dislike organized religion. The worst of it is personified in Bev Keane (Samantha Sloyan), who goes so far as to kill a dog because it looks at her wrong—but it isn’t just her. Their confidence in their faith isn’t just there for peace; it gives them permission to be assholes.

To think that whatever they do must be God’s will. To think they are chosen. But Pride was, after all, the first sin.

I went to Catholic school, all the way up until I finally went to college and went deep into the secular world of a Liberal Arts College. Parts of me have always struggled with religion. Even before I realized I was bisexual, there was always this witchy part of me, which I was told makes me evil.

Magic always made me feel closer to faith. It gave me something I could control. I trusted in a higher power, but I also wanted to communicate it with it in more ways than just prayer. One thing that always stuck to me about Catholicism is praying to saints—that they would take your messages to god.

When I feel angry and spiteful, I talk to Hera. I ask her to soothe me. I ask Isis to help me with my grief. I still talk to Jesus, and I ask him for the strength to suffer with dignity. I even still ask the God that I grew up with to help me when I feel at my lowest self and want peace. I thank them all. They all give me strength in different ways.

I really appreciated Midnight Mass for delivering a product that balanced out the dark, cult-like aspect of faith, but also the things about it that can be beautiful. It was a slog at times (Mike Flanagan loves a monologue), but I found myself in tears at the end—an ending I have chosen to rewatch a lot since finishing it.

The ending of Midnight Mass was cathartic to me—watching Hassan and his son praying to Allah, watching the Catholic community sing “Nearer My God, to Thee” as the sun came out, all of them waiting to meet their death in peace, while Bev, the zealot who rejoiced in judging, the one who wanted to burn everything to the ground but her church, is the only one who panics and tries to dig for cover in the sand. She knows that despite her words, her proselytizing, that God will not be who she sees on the other side.

It was beautiful, haunting, a very sad. Yet it also gave me peace. Faith is hard. Those of us who have it don’t know if we will be rewarded for it or not. But sometimes, it can be beautiful in times where you need it.