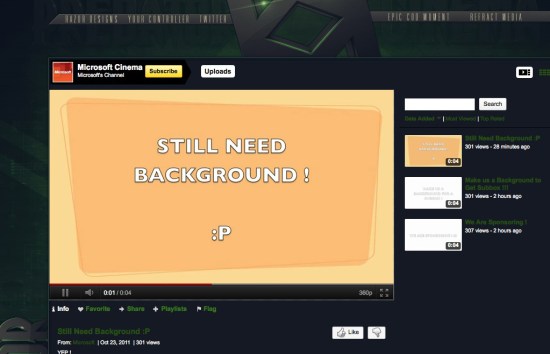 This past weekend, Microsoft’s YouTube account seemed to be hacked. The channel was wiped clean and several new, weird-but-relatively-innocuous videos soliciting a background and sponsors were posted. Upon the wipe, the channel’s country was changed to the United Kingdom and the hometown was changed to “Hey.” As of now, the channel has been largely restored, but the real story behind the hack has yet to be uncovered.

It all seems a little weird. It’s pretty clear the account was accessed by an unauthorized individual (unless this is the weirdest PR stunt ever), but the actions the hacker took are pretty inexplicable. Wiping the channel was relatively malicious, but the videos posted really confuse me. They aren’t obscene or violent or troll-like at all, but just request sponsors. I mean, did this guy really think he’d get some responses?

The hacker, attempting to absolve himself of guilt (or something), also changed the channel’s description to read “I DID NOTHING WRONG I SIMPLY SIGNED INTO MY ACCOUNT THAT I MADE IN 2006 :/,” before it was blanked out. I highly doubt that anything resembling that was the case, but still, this hacker’s approach to a (presumably) hostile takeover is puzzling at best.

Fortunately for Microsoft, their hacking experience went markedly better than it did for the Sesame Street channel. Of course, the fact that both of these fairly high profile channels have been hacked in the space of a week really raises some questions about the security of corporate YouTube channels. Are appropriately secure login options not available, or do corporations tend not to take advantage of them?

Either way, the Microsoft account seems to be back in working order as of now, but the increasing prevalence of high-level YouTube hacks doesn’t seem to bode well for the service. Of course, they are the video-hosting juggernaut, but if security breaches keep happening this way and bogus DMCA violations only continue to get worse, they might have a little bit of a problem.