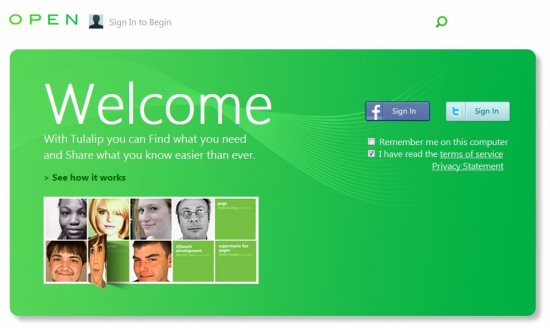 Last night, the good folks over at Fusible happened to notice that Microsof was the proud owner of the socl.com domain name. To their surprise, they also discovered that Microsoft had published content relating to a hither-to unheard of project called Tulalip on the site.

Tulalip, which Fusbile reports is the name of a Native American group in the region of Microsoft’s HQ, appears to be a social aspect to accompany the Bing search engine. Though the site was nonfunctional, it’s worth noting that “Find” and “Share” are capitalized, suggesting that these would be the core functions of Tulalip. It’s also worth noting that Google+ is not fully integrated into Google’s web search, suggesting that Microsoft might be eyeing that as a niche that needs filling. TechCrunch also points out that the Facebook and Twitter sign-in buttons adds credence to the theory that, if it exists, Tulalip isn’t a new network, just a new service for Bing.

Whether this is a real slip up, a real project, or just an attempt to steal the limelight back from Google+ remains to be seen.

Unfortunately, the site is currently down. However, it’s been replaced by an even more teasing message:

Thanks for stopping by.

Socl.com is an internal design project from a team in Microsoft Research which was mistakenly published to the web.

We didn’t mean to, honest.

Just what the hell is going on in Redmond?