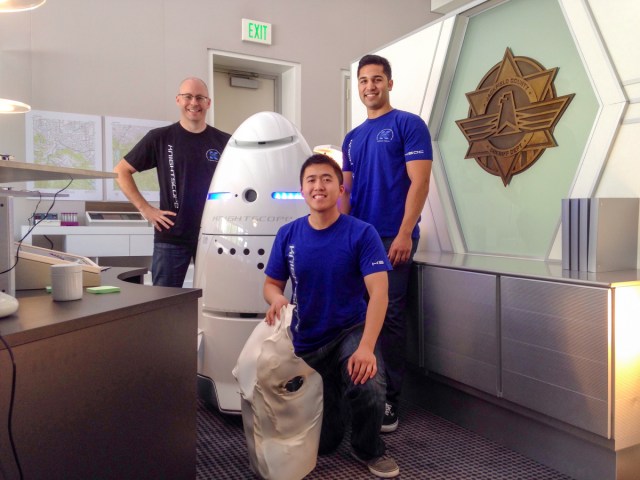 Wow. I wish Microsoft took personal computer security as seriously as they clearly do in the physical world at their offices. Their Silicon Valley campus now has five security robots that look frighteningly like Daleks. Leave it to a bunch of nerds to assume the appearance of a Dalek will strike fear into the hearts of criminals.

The security robot’s real name is K5—not to be confused with K9, which would be far too adorable to be effective at security—but don’t be fooled by its lack of eye stalk or plunger. The K5s are upgraded Dalek models that feature four high-def cameras around its body instead of one blue-tinted eye stalk.

So far, they’re supposedly lacking in skeleton-exposing death rays or any other kind of weaponry, but I suspect they’re just playing nice like that time they got involved in WWII. To hide their malicious tendencies, they simply roll around patrolling and radio back to headquarters when they find something out of place—like an unauthorized person or a 1960s police phone box. What they can do is emit incredibly loud alarms to ward off anybody who didn’t already run screaming at the sight of them.

Really, that’s a great choice of weaponry, because if there’s anything Daleks are great at, it’s producing extremely grating sounds. We’ll be taking bets on how long it’ll be before a Microsoft employee straps an eye stalk and a plunger to one of these and gives someone a heart attack by yelling “EXTERMINATE” through its speakers.

(via ExtremeTech, image via Knightscope)

Previously in robots that unsettle us