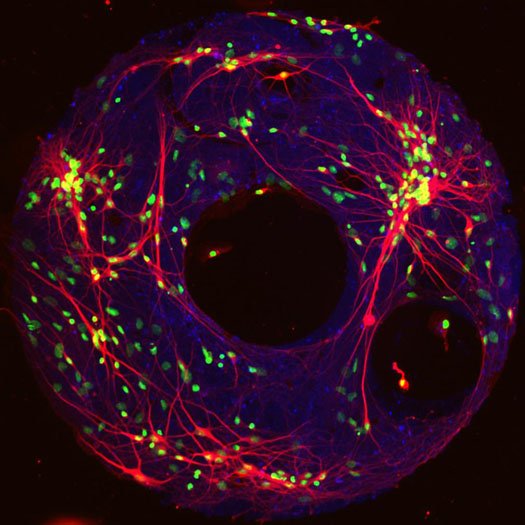 The brain poses an interesting problem to researchers: Because of its complexity, observing and learning about some of its basic functions is extremely difficult. To better understand the process of short-term memory, scientists with the University of Pittsburgh created a simple neural network of some 40-60 neurons.

According to their study, the scientists created the tiny neural network by first stamping adhesive proteins in the shape of a ring onto glass. Neurons from rat brains attached themselves to the proteins, creating connections between neurons as they would in a brain. Once the living cells were connected, an electrical pulse was applied, and the researchers observed the pulse looped through the system. This signal loop is similar to how brains store short-term memory, or “working memory,” where the signal exists long after the stimulus that created it is gone.

In the natural world, this action lasts about a quarter of a second, but the cells in the ring-shaped model looped the signal for a full 12 seconds. This extra time gave the researchers an excellent opportunity to clearly observe the activity of the cells while looping the signal. Though it may be small, this donut-shaped “brain” could shed light on the very nature of memory.