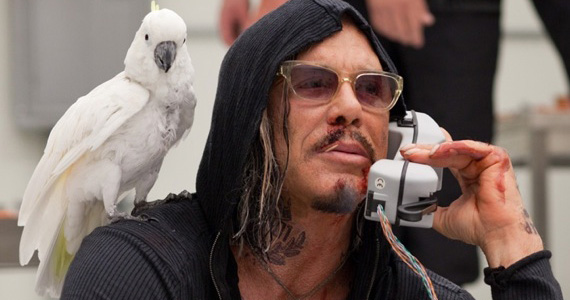 Mickey Rourke will soon be seen in Tarsem Singh’s Immortals but he’s apparently still pretty angry over his role in Iron Man 2. In a recent interview he expressed his frustrations over Marvel’s control of the superhero sequel and thinks they only want to make “mindless comic book movies.”

Speaking with Crave Online, Rourke started talking about several of his “bad guy” roles and how he likes to give depth to whomever he’s playing. “It’s like when I did Ivan Vanko in Iron Man, I fought … You know, I explained to Justin Theroux, to the writer, and to [Jon] Favreau that I wanted to bring some other layers and colors, not just make this Russian a complete murderous revenging bad guy. And they allowed me to do that,” he said. “Unfortunately, the [people] at Marvel just wanted a one-dimensional bad guy, so most of the performance ended up the floor.”

Rourke made sure to point out that it was Marvel’s loss. “If they want to make mindless comic book movies, then I don’t want to be a part of that. I don’t want to have to care so much and work so hard, and then fight them for intelligent reasoning, and just because they’re calling the shots,” he said, “You know, I didn’t work for three months on the accent and all the adjustments and go to Russia just so I could end up on the floor. Because that can make somebody say at the end of the day, oh f**k ’em, I’m just going to mail it in. But I’m not that kind of guy. I’m never going to mail it in.”

He also said that at the end of the day, it was just “some nerd with a pocketful of money calling the shots and that it wasn’t Favreau who got to make those particular decisions. “I wish he would have. And Theroux, we worked together to bring layers to that character, so, you know, I fight for that any time I’m playing like a bad guy.”

The actor isn’t the only one involved with Iron Man 2 speaking out. Robert Downey Jr. recently said he was dissatified and disappointed with the film.