Michelin-Starred Restaurant Responds to Hilariously Terrible Review by Asking, “What Is a Man on a Horse?”

"Being able to draw a man on a horse does not make you an artist." 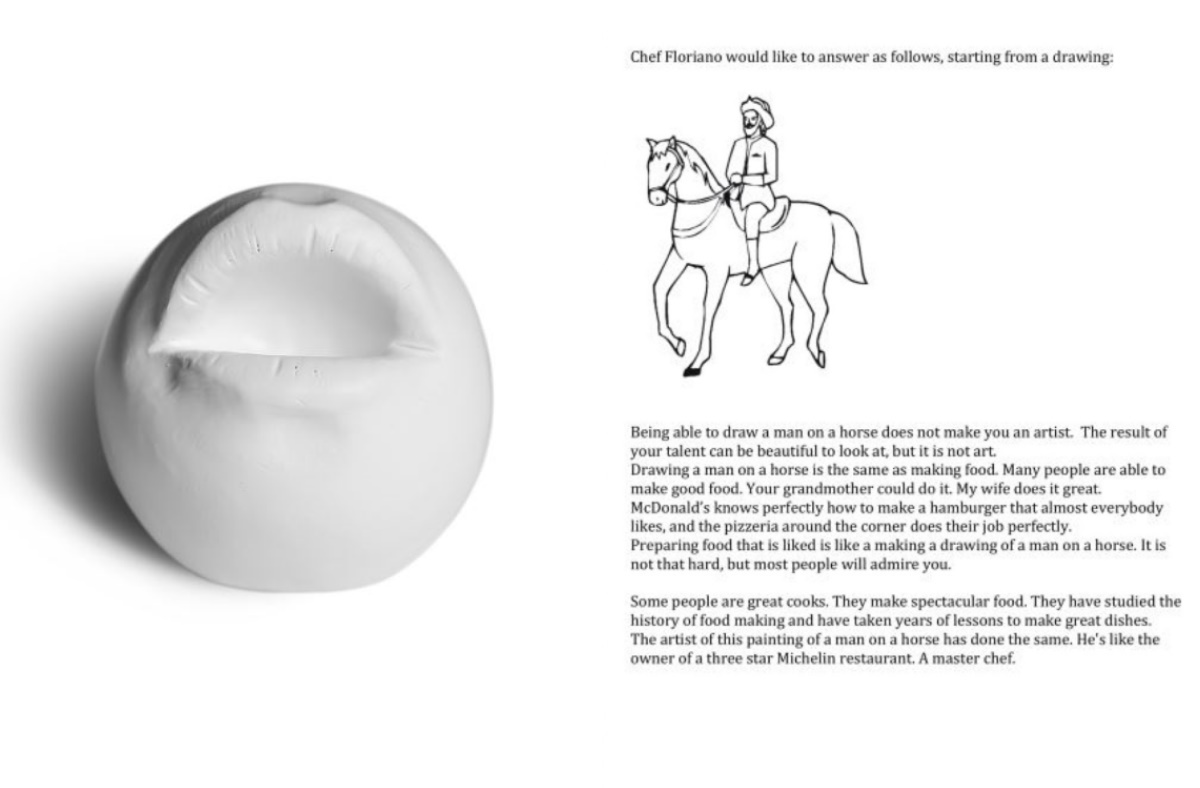 It’s never easy getting a bad review, especially one that goes viral, as is the case with this review of Bros., the only Michelin-starred restaurant in Lecce, Italy. That being said, this response to the negative review is a bit … mystifying.

And will make you question men on horses?

Let’s backtrack a bit here before I get to the part that features three illustrations of men riding horses. It’ll make sense once I provide the context—actually, it won’t, but context is nice.

The meal that includes a plaster cast of the chef’s mouth for you to kiss—no, I’m not kidding

Admittedly, my only view into Michelin-starred restaurants is from the likes of Top Chef and foul-mouthed Hell’s Kitchen hopefuls who want to work in one of Gordon Ramsey’s kitchens. There’s a sophisticated air to them that I’ll probably never live up to, so I appreciate reviews like the ones from Everywhereist travel writer Geraldine DeRuiter.

From the looks of it, I’m missing the most hilarious experience of my life.

According to DeRuiter, the meal from Bros. lasted four and a half hours and consisted of 27 courses. Now, in my opinion, that’s a bit excessive, but I’m a mere peon when it comes to eating food, unable to touch the twinkling star that is a Michelin-level restaurant, so what do I know? Sure, the length of the meal is about the length of a 12-episode anime series if you don’t take breaks between episodes, and yeah, you could finish all of Avengers: Endgame with an hour and a half to spare, but maybe that’s how long Michelin meals are.

Or maybe the absurd amount of time is to prolong the trippy ride you’re in for.

“What followed was a 27-course meal (note that “course” and “meal” and “27” are being used liberally here) which spanned 4.5 hours and made me feel like I was a character in a Dickensian novel. Because – I cannot impart this enough – there was nothing even close to an actual meal served. Some “courses” were slivers of edible paper. Some shots were glasses of vinegar. Everything tasted like fish, even the non-fish courses. And nearly everything, including these noodles, which was by far the most substantial dish we had, was served cold.”

When the food wasn’t something that looked like a child made it with Play-Doh to pretend like they were running a restaurant, it was just … weird.

My Persona 4 brain can only see this dish as a Lying Hablerie, which looks like this: 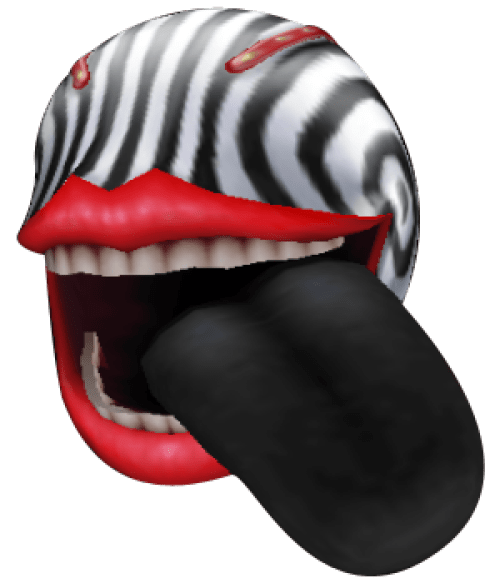 Pucker up! Dinner is served, and it’s sometimes made with rancid ricotta.

“These are made with rancid ricotta,” the server said, a tiny fried cheese ball in front of each of us.

This is, hands down, the most bizarre food story I have ever written, and the utter WTF experience can be yours for about 130 to 200 euros per person, according to DeRuiter, which is a little under 150 to 230 U.S. dollars.

The response, complete with horse analogies

DeRuiter calls Bros.the worst Michelin-starred reviewed restaurant ever, and I’m inclined to believe that. From food droplets being infused with “meat molecules” to the bait and switch Trip Advisor reviews that show actual meals, I’d say that DeRuiter is right in that “worst” assessment.

Interestingly, all the reviews from this year are 1-star save for one, so maybe, once upon a time, the restaurant served more than a singular Goldfish cracker and orange slices.

Or maybe the pictures are from one of the other restaurants on the website? Both Roots and Sista seem to have, well, food being showcased on their page, but Bros. hits you with images of people floating in the water and petting horses, and actually has to have an epilepsy warning because of the flashing lights when showcasing these tattooed cool kids (seriously, there are LOTS of flashing lights, so proceed with caution).

Is it supposed to be a restaurant?

Whatever the case, DeRuiter did get food—question mark—there, but you know what? 27 appetizers do not make a meal—well, it can make a meal if the appetizers are actually substantial, but I don’t think “tablespoon of crab” is gonna cut it.

After DeRuiter’s review went viral, the restaurant responded, according to Today, and that response is pretty on brand, I’d say, from my singular introduction of Bros. being “lick the inside of a replica of the chef’s mouth.”

Today presented the response in its entirety, and I can’t blame them. There truly are no words to fully capture, well, this: 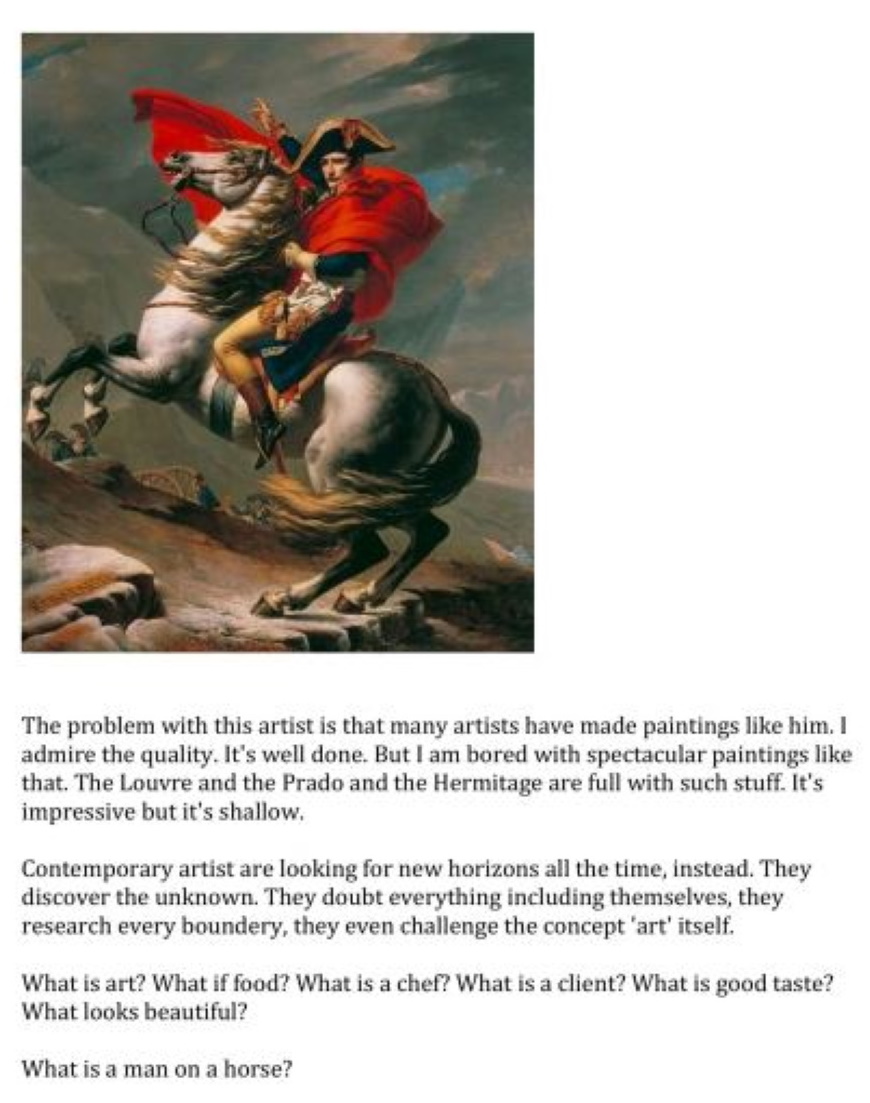 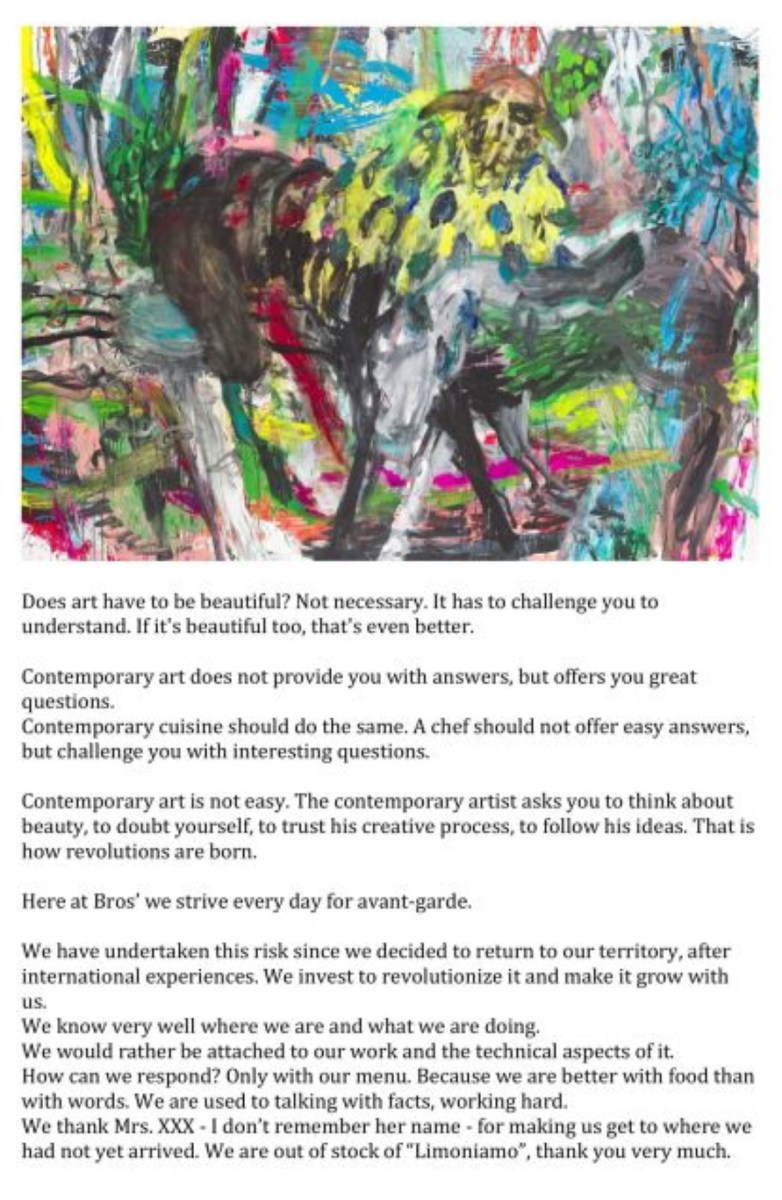 The pettiness of those last two sentences is taking me out. It’s so condescending with its “I don’t remember her name” that it’s hilariously quaint.

By the way? The Limoniamo is the creepy mouth ball that you suck foam out of.

Now look, I know I’m just an uncultured woman on the Internet who is satisfied with things like mozzarella sticks and a well-made crispy chicken sandwich, but I think that this restaurant may be, perhaps, talking out of its avant-garde ass.

Then again, what is a man? A miserable pile of secrets? What is a man on a horse, really?

What is a horse?