Things We Saw Today: Michael Sheen and David Tennant Can’t Quit Each Other, Will Team up for Lockdown Comedy Series 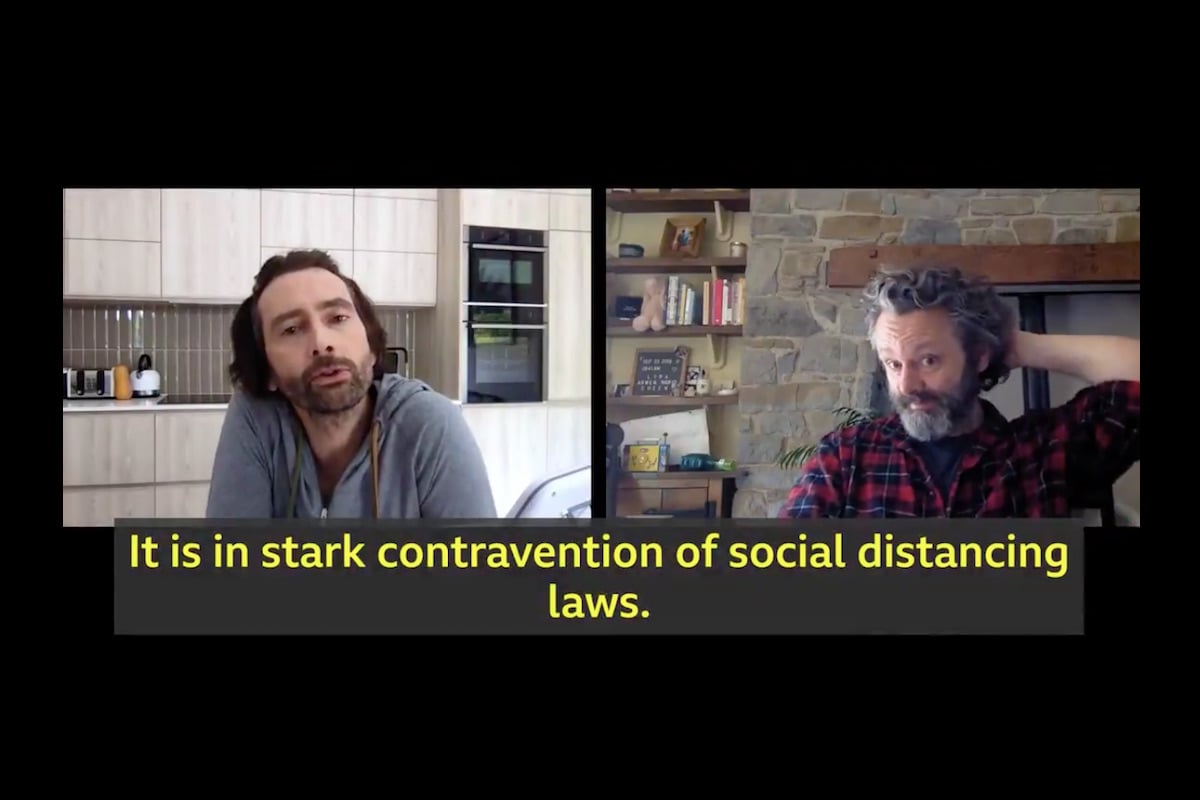 Good Omens co-stars and good pals Michael Sheen and David Tennant are taking on the BBC One lockdown comedy Staged, which has a bloody brilliant premise.

Amazon’s Good Omens burst unto the world a year ago. The show was a hit and a lot of fun—if somewhat uneven—but Sheen’s angel Aziraphale and Tennant’s demon Crowley were pitch-perfect and made the whole thing work. The chemistry between the actors (and thus their characters) was fiery as Aziraphale’s bookshop, birthing thousands of fan-created works and cosplayers. At DragonCon, Tennant was asked who he had the best chemistry with throughout his acting career, and said that it was with his wife, Georgia Tennant, joking that or else, “maybe I should’ve married Michael Sheen.” The two actors are longtime friends and seemed keen to collaborate again, which is now happening.

New comedy series #Staged, starring #DavidTennant and @MichaelSheen, is coming to @BBCOne in June. Here’s a little taster of what you can expect: https://t.co/xmzxmmVHSR pic.twitter.com/hehqJg8OX2

So the band is back together—from a safe social distance. Both Sheen and Tennant have signed on to star in Staged, a “lockdown comedy” of six 15-minute episodes for BBC One. According to Deadline, “they will play the cast of a furloughed West End theatre production during the coronavirus pandemic.”

The series will also feature Georgia Tennant (David’s wife), Anna Lundberg (Sheen’s partner), and actress and producer Lucy Eaton, as well as special guests yet to be announced. The series is directed and written by Simon Evans, who co-created it with Phin Glynn.

From Infinity Hill and GCB Films, Staged follows the cast as they try to keep rehearsals on track during lockdown, with their efforts often bordering on the absurd and the humorous.

I love everything about this. Both Sheen and Tennant are also celebrated stage actors, and there’s a lot of potential to have good fun mocking that culture. From what we can see in the brief preview above, this looks like a perfect vehicle set up for Sheen and Tennant to riff off of one another, and by Lucifer do we want to watch it happen.

(via Deadline, image: screengrab/BBC One)

It’s the weekend at long last! What did you see today?