Metroid’s Samus Aran is a Transgender Woman. Deal With It. 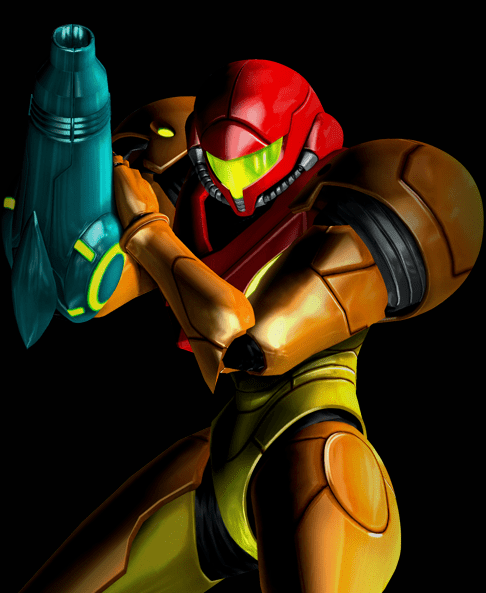 There’s been a lot of talk lately about the lack of women protagonists in videogames. But our problems with diversity don’t stop there. As one article recently noted, shockingly, there have only been 14 playable black women in videogame history. Gamers who aren’t cisgender white men often find themselves lacking characters they can rally behind.

Representation for transgender people is equally tough to find in gaming. Both Dangonronpa and Persona 4 managed to blunder transgender representation. One of the most famous transgender video game characters, Poison from Final Fight, is empowered but blatantly oversexualized. Characters and stories like this reinforce the harmful idea that transgender women only have societal value in their sex appeal.

That’s why I’m thrilled to tell you that one of the most famous women in videogame history happens to also be a transgender woman! It’s none other that Nintendo’s Samus Aran!

It’s true! In 1994, the writers of the official Japanese Super Metroid strategy guide asked Metroid’s developers if they could share any secrets about the intergalactic bounty hunter. Hirofumi Matsuoka, who helped work on the original design for Samus Aran, claimed that she “wasn’t a woman,” but instead, “ニューハーフ,” or “newhalf.” This language has its own issues, but terminology used for gender in the early 90s was as different in Japan as it was in the West.

There has been some debate asking if the comment was in jest or genuine. Some have compared Matsuoka’s use of “newhalf” to the offensive Western term “shemale.” It’s possible to interpret this as an ugly joke about Samus’s traditionally masculine appearance, as illustrated in the 80s by Nintendo Power, where she is said to be six foot three and 198 pounds. In the uglier context, “newhalf” refers to trans women who have not had gender confirmation surgery – equivalent to Matsuoka laughing and remarking, “Yeah, Samus has a dick!”

However, “newhalf” wasn’t always used in a pornographic or insulting context, especially in 1994 Japan. The term is older, and stems from popular use of the term ハーフ, or “half,” used to refer to Japanese people of mixed-race origin. This form of self-identification became popularized throughout the early 1980s. By 1982 it had been picked up by the press and was used to refer to transgender performers such as actress and singer/songwriter Rumiko Matsubara.

Looking to negate Matsuoka’s remark, some gamers have pointed to a FAQ on the Japanese Zero Mission site by Yoshio Sakamoto, co-director of Metroid. There he says Samus being a newhalf is not impossible, but unlikely. Others have pointed to Samus’s portrayals as a child in Metroid Zero Mission, Metroid Other M, and official manga as proof that she is actually a cisgender woman.

This is where we get into the uglier world of cisnormativity and transgender erasure. Over the years, Nintendo has slowly altered Samus’s design into a petite blond woman with large breasts. Finding her sexually attractive, some gamers are flat-out uncomfortable thinking about her as a transgender woman. As @ThatSabineGirl points out on Twitter, many gamers are incorrectly assuming she is cisgender simply from her gender presentation. The truth is, you can’t know if someone is transgender by simply looking at them. [UPDATE September 2nd, 11:40 ET: At their request, we have blocked out the name of one of the individuals involved in this discussion.] 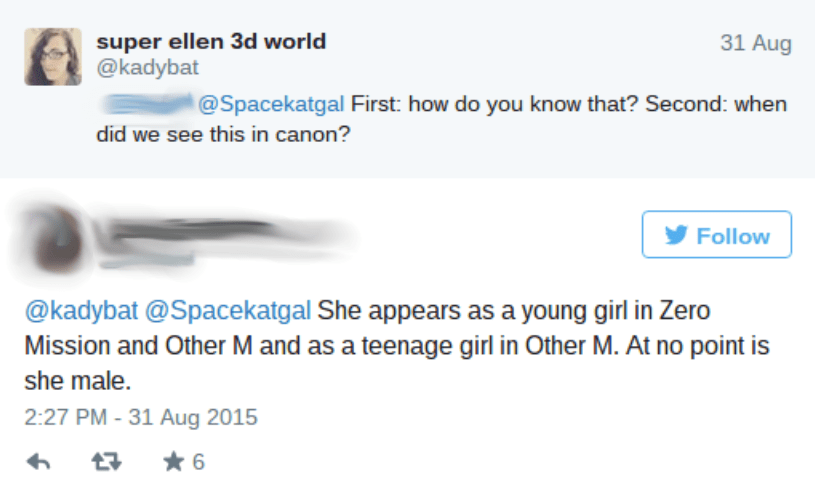 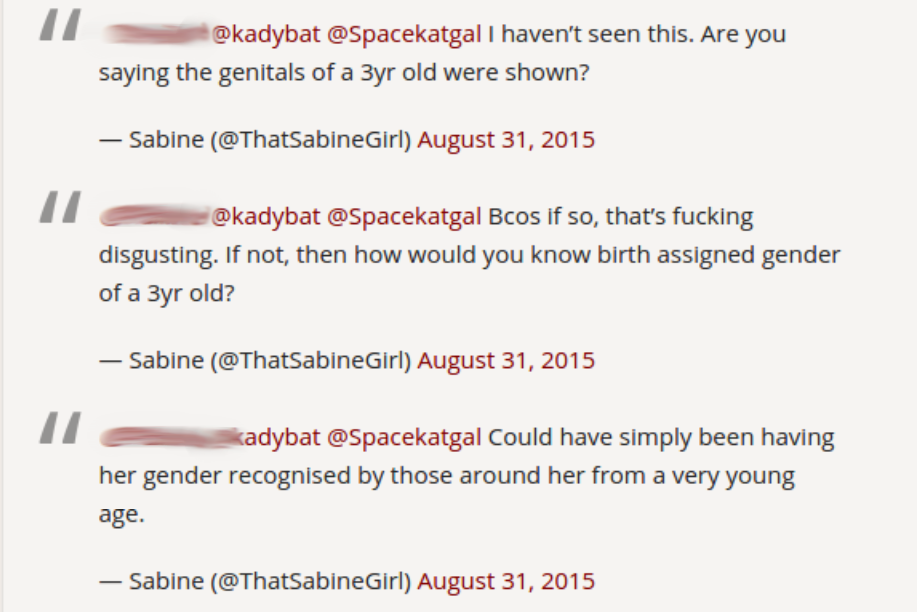 Fans asking for ironclad proof of Samus’s apparent transition can suspend their disbelief enough to believe there are bird aliens that develop powersuits, but can’t believe a girl could declare her gender identity at a young age. Besides, this is the same canon that purposefully misgenders the main character in both the Western and Japanese manuals for the original NES release in order to keep her gender a ‘surprise’.

No matter what fans say, the intent of the creator is the only opinion that really matters. When J.K. Rowling announced that Dumbledore from Harry Potter was gay, that was the end of the discussion. Some fans couldn’t accept or understand it, but her public statement was the only source that mattered. It’s an authorial acknowledgement that this character, like any, can realistically be queer or transgender without it having to define them.

What’s the harm of giving the benefit of the doubt to one of the most marginalized communities in gaming? Gamer Aria Ehren correctly points out that assuming characters are cisgender and straight without a preponderance of evidence is erasure.

And look at replies. The mere suggestion a beloved character could be trans is always met with such defensiveness. https://t.co/aSouHx3gAF

I mean, it’s really just a suggestion from one of the creators. We trans peeps we want badly to be represented. Cis people rarely allow us.

Queer gamers have seen the language used for gender variant characters like Poison, Birdo, and Vivian evolve over time. That there’s been so much discussion around a throwaway quote in a Metroid strategy guide shows how desperate LGBTQ gamers are to find faces and stories like their own in games. For many, confirmation from Nintendo or Matsuoka isn’t important – it’s that we allow space for everyone in these worlds we love.

Ellen McGrody (@kadybat) is a 23-year-old queer writer and gadget witch in Oakland, CA. She focuses on the ways tech, pop culture, and games impact and are influenced by queer folks.

Brianna Wu is the head of development at Giant Spacekat, a software engineer and the host of Isometric and Rocket on the Relay.FM network. She’s also a frequent speaker on women-in-tech issues. Worldwide press has called her the “Games Boss.” For more information on Brianna, visit BriannaWu.net, or find her on Twitter, @Spacekatgal.