How I Realized That Men Can Cook Thanksgiving Dinner 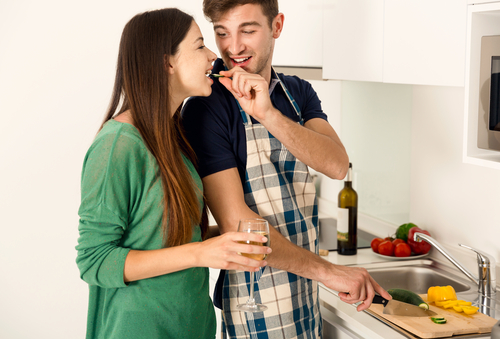 I remember very little of my paternal grandmother. Emphysema took her when I was still a pre-teen, and I’d spent most of my life up until then away from where she lived and where I’d been born—small town Indiana. I do remember her thick, southern drawl, and her ornery parakeet, whom she named “Chester.” And, thanks to yearly trips back home during the holidays, I remember her in the kitchen at Thanksgiving. I remember the incredible food she made, with the help of her grown daughters—my aunts. Funnily enough there was no turkey or stuffing, but pineapple-glazed ham, mac and cheese with homemade sauce and pans full of potato salad. For dessert there was pineapple upside-down cake, with maraschino cherries. Grandma Cook had a thing for pineapples.

As I watched her and her daughters prepare the epic feast in their tiny kitchen, moving around one another like gears in a high-end watch, an idea formed in young mind. It wasn’t a conscious idea—I didn’t even realize it was there until I had to confront it years later—but it was powerful, all the same. It was the idea that women were in charge of Thanksgiving. Thanksgiving was a woman’s holiday.

My experiences with my maternal grandmother (who lived only a few streets over from my Grandma Cook) seemed to confirm my discovery. The women on my mother’s side used a combination of coordination and cooperation to prepare a meal that could feed over a dozen people, all from a kitchen which could only hold four. The men ate the food, and maybe helped with the dishes. But that was all they contributed to the affair.

Though I was usually sensitive to rigid gender roles as a kid (I’d spent a long time being told I should love dolls when I was instead obsessed with Power Rangers and bugs) it never occurred to me that the Thanksgiving gender split was sexist. Maybe it was because as a kid, cooking seemed like a fun, mysterious grown-up activity. I knew that one day, I too would gain the magical food-powers of my female relatives, and be invited into the kitchen to help prepare Thanksgiving feasts. The men were probably jealous that they would never possess such knowledge nor wield such mastery.

After my Grandma Cook passed away, my father’s side of the family stopped getting together for Thanksgiving. Once my maternal grandmother—my Grandma Bunn—began tiring more easily, the responsibility of Thanksgiving fell to my mother and her sisters. It wasn’t the same as going to Grandma’s house for Thanksgiving, but in a way it was nice to have her at our place, so I couldn’t complain too much. By this time I was fourteen—plenty old enough to feel proud of my mother as she took up my Grandma Bunn’s mantle of holiday responsibility. She did a great job, recreating her mother’s food perfectly, with the help of her two sisters. By this time, I was asking to help in the kitchen, yet my female relatives seemed hesitant. I didn’t realize it at the time, but they had already noticed something that I would not discover for a few years yet.

I couldn’t cook. My attempt to make chocolate chip cookies on my fourteenth birthday had ended in an oven filled with flubber-like goo. In Home Economics class, I had somehow managed to set a pot of tomato soup on fire. I didn’t work well in close quarters with other people. I was afraid of knives. Even the fire on our gas stove made me nervous. If ever there was a person born to do something outside of the kitchen, it was me.

It only took a few more years for me to realize this, and move on to dreams more suited to me. By the time college rolled around, I’d become content to eat pizza rolls and easy mac (or raw veggies and canned soup, if I was on a health kick). The kitchen was no longer a place I had any desire to be.

But I still loved food. Eventually, I married a man who loved it just as much. But he was different from me in one crucial way: he could cook. In fact, he had a talent for it. I’ve seen my husband turn enough hodgepodge leftovers into delicious stews and casseroles that I’ve come to believe he’s part wizard. Yet I wasn’t prepared, the year after my Grandma Bunn passed away, for my mother to call and tell me that the extended family would no longer be getting together for Thanksgiving, and that she and dad would be taking a trip out of town over the holiday.

Kyu raised an incredulous eyebrow. “Why don’t we just invite some friends over for Thanksgiving, and I’ll make the meal?”

Somehow, in spite of the fact that this man cooked meals for me literally every day, the idea of him cooking a Thanksgiving feast was unthinkable. I sputtered that I didn’t think he could—or should—attempt it.

I didn’t blame him. It was a ridiculous idea, but one that had been lodged in my brain since childhood, and that I’d never bothered to confront. What would it even be like to watch a man prepare a Thanksgiving meal? Would the food taste the same? The thought wasn’t quite like imagining Christmas without a tree, but similar: like imagining it with a giant cactus in the living room. Like me, my husband was shocked that I, an outspoken feminist and gender-role-busting lady, was so hung up on this. But I’d considered the ability to roast a turkey to be a feminine superpower for so long, I was a little afraid to let it go. Doing so was, in a way, letting go of a piece of my Grandma Cook, and my Grandma Bunn, and all of my aunts, and my mother and even my naïve, little-kid self.

That first Thanksgiving at home, with my husband and friends, was one of the most magical of my life. Watching Kyu effortlessly balance eight cooking skills at once was a sight that made me doubly proud to have married him. Seeing my college friends, many of whom had been at our wedding three years prior, laughing together at my dining room table was something I will never forget. It was a sight which dumbfounded me with its stark adultness. I really had grown up, and made my own family. My own place in the world. My own Thanksgiving.

As cheesy as it sounds, and as often as we’ll hear it, Thanksgiving is about more than just the food (though the food Kyu made was some of the most delicious I’d ever had). It’s about family, whatever that might look like. About solidifying connections with one another. For me, it had also always been about a particular, over-romanticized feminine mystique, of sorts. My husband changed that. Growing up changed that. Watching my male friends help out in the kitchen, wrapping leftovers in foil and cleaning their plates in our sink without having been asked to do so, changed that. But I will never forget the amazing women who worked so hard, every year, to give their families unforgettable feasts.

Even if I will never be one of them.

Maria Cook is a freelance writer and aspiring novelist from Indianapolis, Indiana. Her work has appeared in Marie Claire, Ravishly, Punchnel’s Mythic Indy Anthology, and won Narratively’s “most viewed story” prize for the month of June 2016.