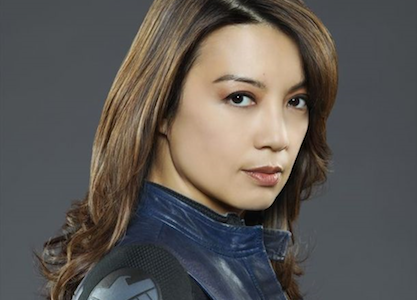 Melinda May is introduced to us in the Marvel’s Agents of S.H.I.E.L.D. when a hardened, cynical Agent Ward says “Is that who I think it is?” and refuses to believe that she’s “just the pilot.” But while her reputation precedes her on the show, actress Ming Na Wen explains that the viewers might have to wait a little longer to hear her whole story.

What can I say? I think what’s going to be interesting with her character is you discover her slowly. She’s a bit of a mystery, she’s a bit damaged, she doesn’t say very much. She’s slowly revealed — which means I don’t know who she is yet!

This last seems like the actress was simply being circumspect in what she’d tell IGN: she says she couldn’t even elaborate on how her character gets along with her superior, Agent Coulson, or whether they knew each other better than any other two folks who shared a break room while “cleaning their weapons.” But she could be upfront about being a geek girl who got to work with Joss Whedon:

I have pure adulation for him. When you go from being a geek girl, loving someone’s work, and then you actually get a chance to work with that person and to find out that he is beyond all your expectations… He’s truly not just the most genuine, grounded human being, but he really cares, and he’s so passionate and gifted about all the stuff that he does. So to work with him is just a dream.

It’s a long wait until September, when we’ll finally get to see the whole show and maybe get a little more information on the mysterious soldier Melinda May.