Melania Trump and the Sexist Role of “First Lady”: Why Do We Still Even Have This? 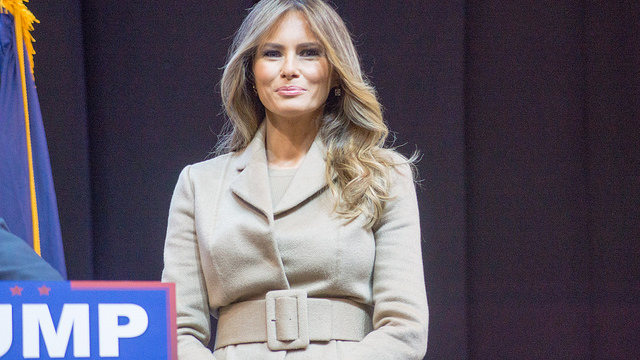 Something that would have been amazing about a President Hillary Clinton is the opportunity to see what a First Husband (First Lord? First Man? First Gentleman?) looks like and what would be expected of him. Would we change the title to First Spouse? I’m sure that everyone reading this site believes that it’s high time for a female President, and has no trouble imagining a woman doing that job. Now picture a man engaged in the standard “duties” of a First Lady.

Because, while yes, modern First Ladies take on being spokespeople not only for their husbands, but for the Party, and for their causes of choice, the fact is that a lot of those modern duties exist to pad what is, at heart, a sexist role. A role that also includes selecting china patterns and giving the White House its decorative flair. They also have to basically give up whatever lives they had going on previously, despite the fact that it isn’t they who are running for office, to take on this “job.”

In this interesting (and infuriating) article at The Daily Beast, “Will Melania Trump Really Be an Absent First Lady?“, Kate Andersen Brower, author of First Women: The Grace and Power of America’s Modern First Ladies, said that “I think the American people want to see a first lady who is engaged, and they’re hungry for that void to be filled because once a disaster happens the first lady is traditionally responsible for consoling the country.”

Not only are first ladies expected to take on nurturing the entire country as if she were their mom, but they’re also expected to make their husbands — the people U.S. citizens actually elected — look good. The article says this about Melania Trump’s decisions up until now:

“She is relinquishing a lot of opportunities to positively shape Donald Trump’s image despite the fact that his popularity is plummeting, and that has been a standard role for first ladies to fill in the last three administrations,” said Lauren Wright, a political scientist and author of On Behalf of the President, noting that Michelle Obama, Hillary Clinton, and Laura Bush all helped to move public opinion on policy and public opinion about their spouses.

I say the above is infuriating, because the American people seem to have certain expectations of a First Lady that are entirely unreasonable. She’s expected to give up her life, be at the President’s side, and console not only him, but the entire country. Both the American people and the White House treat “First Lady” as if it’s a job.

According to Money Magazine, in a thought-provoking article titled “Want to Fix Wage Inequality? Start With the First Lady,” the President’s annual salary is $400,000 plus a $50,000 expense account per year. Now, that’s not a lot, considering that this is the leader of an entire country, but it’s a salary, and the President is also a public servant.

Meanwhile, First Ladies are expected to be at the beck and call of their husband’s administration, giving up their normal lives to do a job they weren’t signing up to do…for zero pay. Michelle Obama gave up a $212,000 annual salary to be First Lady. Hillary Clinton gave up being a partner at a prestigious law firm.

Now listen, it’s not as if there aren’t perks. They get to live in a mansion, have a security detail, a paid staff, free travel, a new wardrobe, all that good stuff. But they also have a 24/7 job they didn’t choose, that no one chose her for (except the husband that married her), and they are basically put in a position where they can’t refuse to serve.

Would a husband give up his successful, fulfilling career doing damn near anything to stand by his wife’s side in photos, pick out china patterns, champion a cause, and not get paid? Perhaps the only reason it might have worked for Bill Clinton is that he’s already been President, so there’s nothing he’d need to prove, but I know plenty of heterosexual couples whose major struggle in the marriage is that the wife makes more than the husband, and that “puts a strain” on things. Perhaps a large reason why we haven’t had a female President sooner is that there are too few American men who can’t abide their wives being more successful than they are. Also, apparently, we would never elect a single person, let alone a single woman, to be President–because family values, something-something.

When I first read The Daily Beast article, a large part of me was silently cheering for Melania for not moving into the White House. I can’t look at a photo of her without feeling sorry for her. Sure, she married Donald Trump, but she certainly doesn’t look entirely happy about it whenever they’ve been photographed together. I thought this reluctance, this almost-refusal, of First Lady duties was her protesting in her own way. Or, if not a protest of her husband, then an assertion that her needs also matter. That her life, and the life of her young son, matter equally. Hell, matter more. Certainly that they matter enough to be given their own consideration outside the orbit of politics.

Sadly, the piece was updated with the following:

The White House has announced that the first lady has appointed Lindsay Reynolds to be her chief of staff. “It has been an honor to take on the responsibility of the position of First Lady, with its long history as an important representative of the President, our family, and the traditions of our nation around the world,” Melania Trump said in a statement. “I am putting together a professional and highly-experienced team which will take time to do properly.” Reynolds, who was associate director of the White House Visitors Office under George W. Bush, will also serve as assistant to President Trump. Further, Wolkoff has told ABC News: “Mrs. Trump will be moving to D.C. and settling into the White House at the end of the school year, splitting her time between New York and D.C. in the meantime. Mrs. Trump is honored to serve this country and is taking the role and responsibilities of the First Lady very seriously.”

So, it seems that Melania is not refusing her First Lady duties. Or rather, she’s been put in a position — by her husband, by the Trump administration, by the Republican party, and by America — in which she can’t say no.

At the very least, I would advocate for First Ladies to receive salaries. It’s only fair for all the work they do. However, more importantly than that, I think that Presidential spouses should be given the choice of whether or not they want to serve in that way. Agency is more important than money, and feminism is about women having options. All women. Even Melania Trump.