Megan Rapinoe on Olympics Protest Ban, “We Will Not Be Silenced.”

The soccer star reacts to the new Olympic committee ruling. Megan Rapinoe issued a statement in response to the Olympic Committee’s new ruling that bars athletes from making any political gestures at the 2020 Olympics in Tokyo. The soccer star was responding to Rule 50, which prohibits kneeling, raising a fist, or any other protest while the athletes are on the world’s stage. Rapinoe responded via Instagram, saying “So much being done about the protests. So little being done about what we are protesting about. We will not be silenced.” 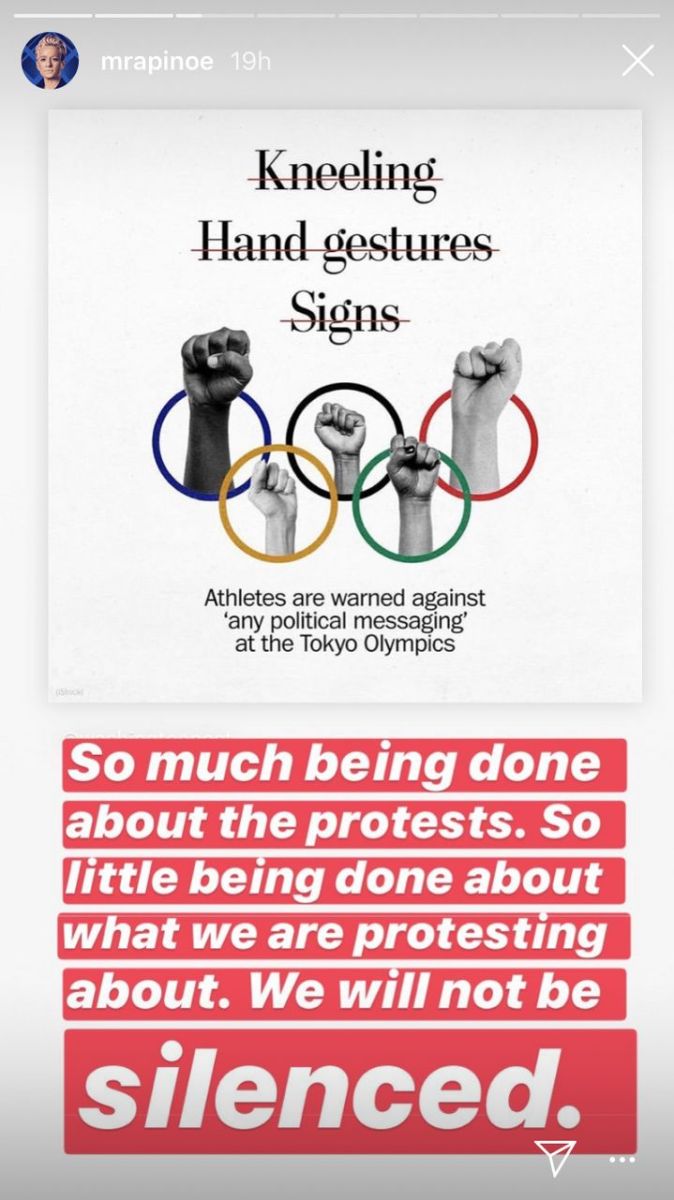 The IOC Athletes’ Commission introduced Rule 50 on Thursday, which “provides a framework to protect the neutrality of sport and the Olympic Games. It states that, “No kind of demonstration or political, religious or racial propaganda is permitted in any Olympic sites, venues or other areas.”

The International Olympic Committee released a statement saying, “It is important, on both a personal and a global level, that we keep the venues, the Olympic Village and the podium neutral and free from any form of political, religious or ethnic demonstrations.”

This comes after two athletes, hammer thrower Gwen Berry and fencer Race Imboden, were placed on probation for a year after protesting during the 2019 Pan American Games in Lima, Peru. Imboden kneeled on the stage in protest of President Trump, as well as racism, gun control, and the treatment of immigrants.

and a president who spreads hate are at the top of a long list.
I chose to sacrifie my moment today at the top of the podium to call attention to issues that I believe need to be addressed. I encourage others to please use your platforms for empowerment and change.

Berry, who raised a fist during the medal ceremony to protest “extreme injustice”. Berry criticized the new rule in an interview with Yahoo Sports saying, “It is a form of control … It’s kind of like silencing us at the biggest moments of our lives. Which … I really don’t agree with it.”

U.S. hammer thrower Gwen Berry raises her fist at the end of the national anthem at the Pan Am Games today. (h/t @sergeta) pic.twitter.com/gnBCEEDN1m

“We sacrifice for something for four years, and we’re at our highest moment,” Berry elaborated. “We should be able to say whatever we want to say, do whatever we have to do – for our brand, our culture, the people who support us, the countries that support us, [everything]. We shouldn’t be silenced. It definitely is a form of control.”