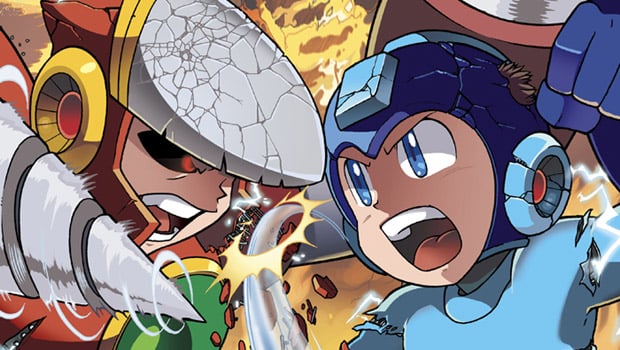 The Mega Man comic has been chugging along comfortably for the last three years under the Archie Comics label, which has been undergoing a slow evolution with some genuinely new and surprising ideas and storylines. Writer Ian Flynn and a team of talented artists have been recreating the stories of the original NES Mega Man games with a mix of reverence for the original material and willingness to take the lore in some unexpected directions that make it the perfect video game comic adaptation.

A major theme in the comics – one which has been touched upon in companion stories and design documents over the years – is the Robot Masters’ freedom of will. While each has their own sentient personality, they have limited free will, and everything they do has to be related to their primary function. Dr. Wily, being the paper-thin dastardly villain that he is, reprogrammed his most powerful robots, most of whom were built for physical labour or research, for a new, single purpose: to destroy Mega Man.

Issue #43 shows what happens when Needle Man confronts that order, in sobering fashion. It’s best I just let the pages speak for themselves. 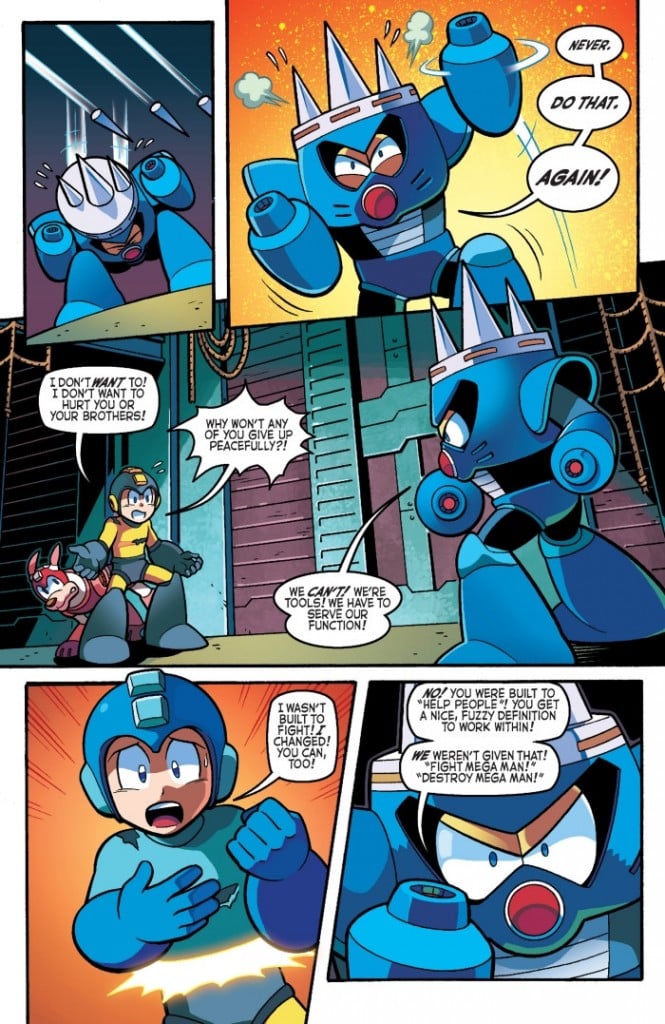 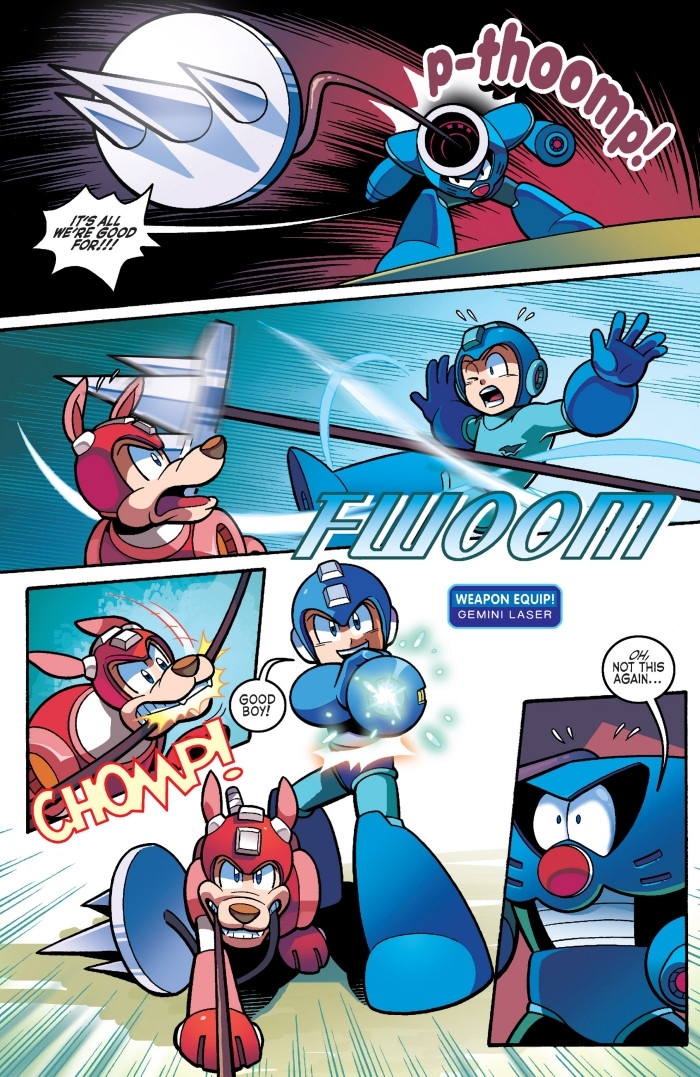 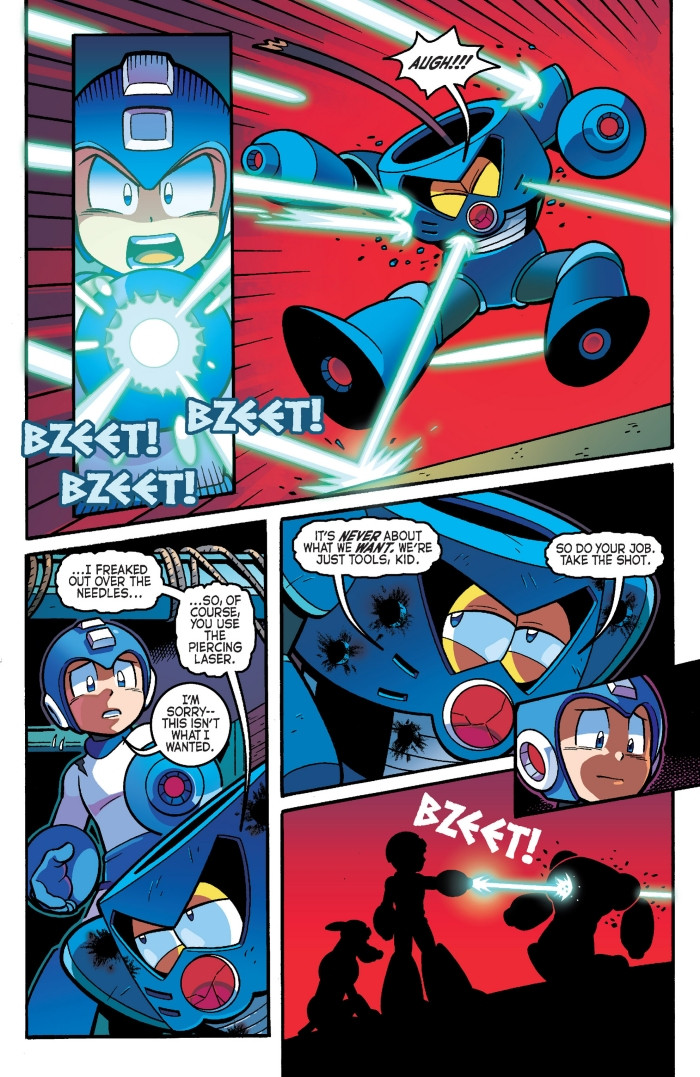 …Well that was horrific, wasn’t it?

This might be the last thing one would expect when opening up a brightly coloured comic based on the digital hero of your childhood, but my god, what storytelling. Mega Man’s pleads for Needle Man to change, as Mega Man himself had – just as he changes the colours that denote his equipped weapon in the same panel. Needle Man’s resignation at his life’s narrow and predetermined purpose. Mega Man’s moment of hesitation and pity, before taking the shot. The way Needle Man looks helpless at the end, without any of his spiky accoutrements. And Rush’s crestfallen expression at the end? Whoa. What is happening to my 8-bit memories?

I’m not really sure whether I can say this sequence makes Mega Man an unreserved recommendation; I’m sure not everyone wants something as heavy as this in their stories about robots and cackling mad scientists. But Archie Comics have been pushing the envelope like this for a while – whether it was by forcing Archie to kill his zombified father, marrying Sabrina the sometimes-teenage witch to Cthulhu, or having Archie himself die in defence of gay lead character Kevin Keller.

But the Mega Man comics are some of the best examples of their new direction. It gives a incredible new insight into the dozens of characters we’ve grown up to love, and given them powerfully human motivations. It’s shocking, really, when you realize how faithful this sequence is to the original lore of the Robot Masters – it’s just the logical expansion of what these characters would have to wrestle with once they escaped the two-megabit shackles of their source material.

So rest in peace, Needle Man. I don’t imagine Mega Man is happy with his “help people” directive when it comes to this.

Jonathan Ore writes about arts and culture, usually with a focus on video games, comic books, and television. He’s an associate editor at Toronto-based nerd siteDork Shelf. He’s also social media, photo/video and arts & entertainment jack-of-some-trades at CBCNews.ca. You can find him on Twitter @Jon_Ore.