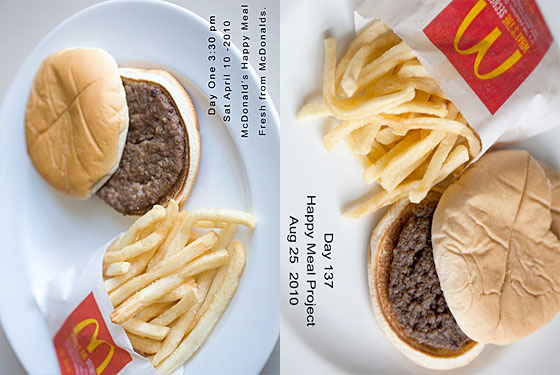 We’ve heard anecdotal reports of the freakish preservative properties of McDonald’s food before — one woman claimed to have kept a McDonald’s hamburger sitting around for twelve years, with little change — but this is the closest thing we’ve seen to transparent scientific documentation on the subject. A photographer named Sally Davies bought a McDonald’s Happy Meal on Saturday, April 10, 2010, set it on her living room table, and photographed it for 137 days straight: As of August 25th … well, you can judge for yourself by comparing the ‘before’ and ‘after’ pictures above.

According to McDonald’s website (warning: PDF), the only ingredients in the McDonald’s beef patty are “100% pure USDA inspected beef; no fillers, no extenders. Prepared with grill seasoning (salt, black pepper).” The buns do, however, contain the preservatives sodium and calcium propionate, and McDonald’s french fries contain citric acid and tert-Butylhydroquinone as preservatives. Still: How do you explain that  nigh-identical, only slightly dehydrated patty up above?