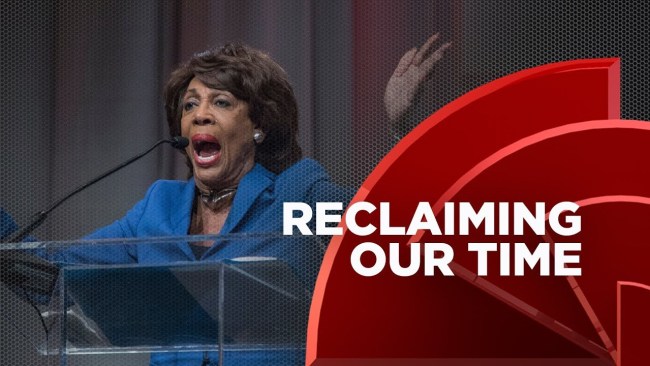 This weekend, the Women’s Convention took place in Detroit, put on by the team behind the Women’s March. The keynote speaker was our national hero, Rep. Maxine Waters, who inspired the convention’s slogan, Reclaiming Our Time. And in her speech Saturday, she did just that.

If you’ve ever heard Maxine Waters say words about just about anything, you probably have an idea of how straight-up fire her speech was. Waters takes her job seriously, she sees no point in hiding her hatred from Donald Trump, and she does not have time to mince words about the current state or the future of American politics. She opened her speech by declaring that “Donald Trump is the most dishonorable and despicable human being to ever serve in the office of the president.”

She also led the crowd in a chant of “Impeach 45!”

It’s no surprise that sexual harassment and assault were main topics of conversation this weekend. Waters, like so many of us, see a clear connection between what is happening in Hollywood and what is happening everywhere, including in the White House.

“It is very fortuitous that we are gathered here this afternoon in Detroit as we continue to witness a record number of women who are boldly coming forward to reveal disturbing and grotesque acts of sexual harassment, assault, and rape, oftentimes at the hands of men who believed they were too rich and too powerful to ever be confronted or held accountable,” she said (via Vox). “We’ve learned that it’s not only Hollywood actresses and entertainers who have been targeted and assaulted by such perverted and disgusting people.”

She told the crowd, “At the top of our agenda at this convention, there must be an effort to strengthen women’s courage and inspire them to continue to come forward and reveal the abuses that they have silently endured.”

Waters struck a fierce nerve by referencing Hillary Clinton’s memoir, What Happened–specifically the passage in which Clinton reflects on what it was like to be stalked across a stage by Donald Trump. Most women have had the experience of a man attempting to intimidate us and disrespect us and make us look and feel small. When that happens, let’s play Waters’ words in our heads.

“When anybody does that to you and any of these men try and intimidate you, just remember what Hillary should have said: ‘Creep, get off my back!’”