Matt Smith Proposes Inside Doctor Who Museum (Not What You Think) 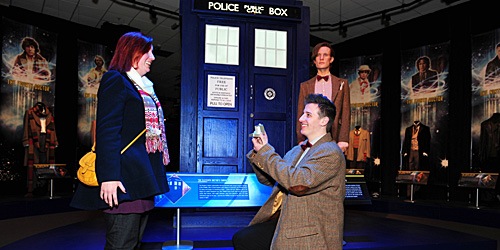 It was a proposal, and it was a Doctor Who museum, and it was even a Matt Smith… but it wasn’t that Matt Smith. Not the one who plays the doctor.

It was twenty-two year old Matt Smith from Essex, England, proposing to his girlfriend and Who fan Stacie-Anne Dilkes.

Smith did get some help from the BBC to plan the proposal, probably primarily to get permission to actually stand inside an exhibit a the museum, dressed in a tweed jacket and bowtie. He stepped down from the exhibit, went down on one knee, and happily enough, Stacie said yes. The whole thing was even blessed by the Doctor himself. Matt Smith (that is, the one from the show) wrote them a personal note:

Matt Smith proposing to his girlfriend! Firstly, being a Smith means phone calls to the bank take so much longer – there are so many Smiths!! But I bet none of them have proposed at the Doctor Who Experience! Amy and Rory would be proud. Next – babies in the TARDIS…? Congratulations to you both and many years of happiness. Love, Matt.

Hopefully the couple gets many long years of traveling through time (very slowly and in the right order) before their regeneration. I understand that the personality changes that go along with that sort of thing can tough on a relationship.