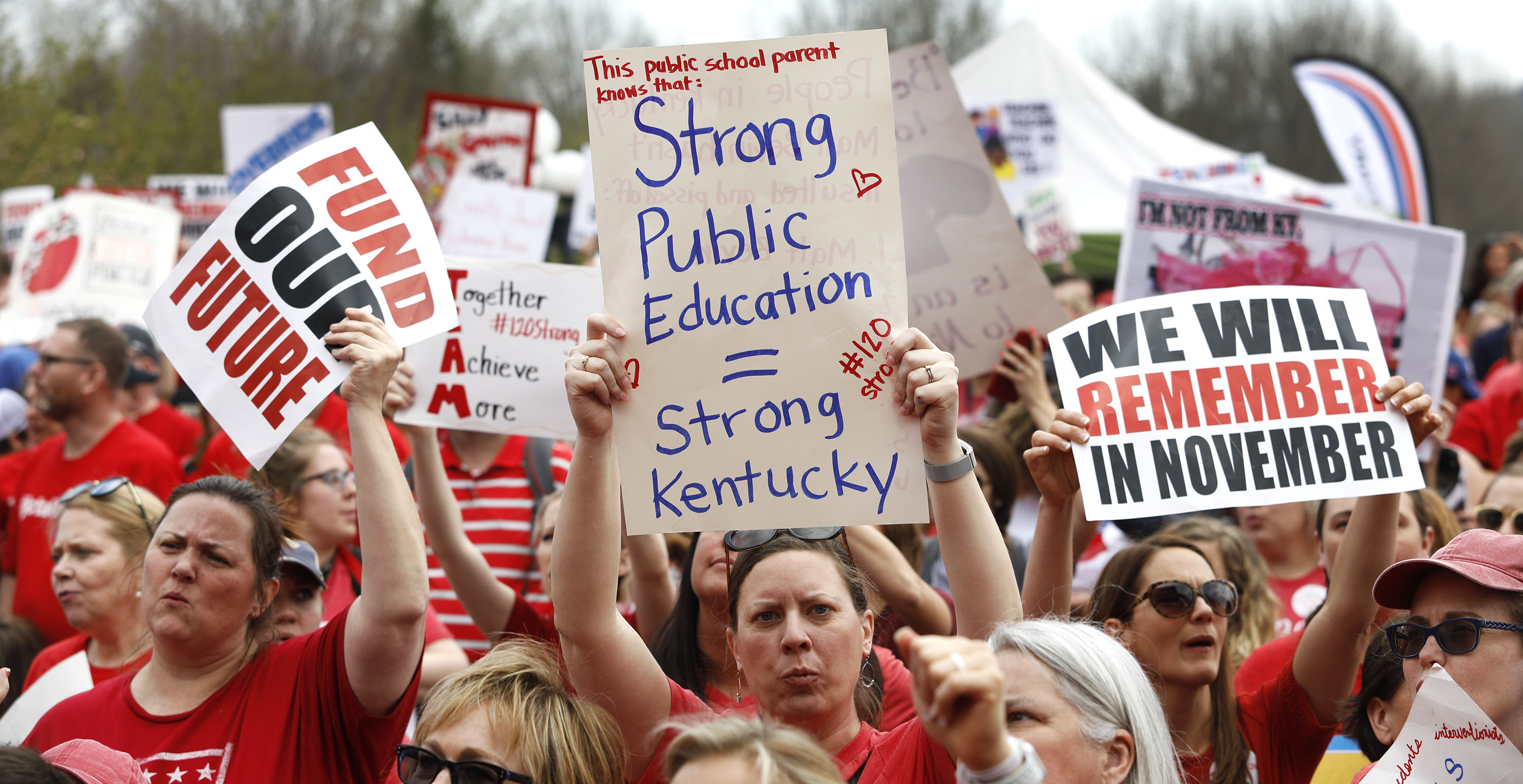 Over the last few weeks, teachers across the country have been on strike, demanding higher wages and better working conditions. While teachers in various states have seen pushback from their local politicians, Kentucky’s governor, Matt Bevin, is the hands down the winner for Worst Comment Imaginable.

Last Friday, he told reporters that these striking teachers were responsible for “hundreds of thousands” of children being left home alone and all the dangers they then face. “I guarantee you somewhere in Kentucky today, a child was sexually assaulted that was left at home because there was nobody there to watch them,” he said. “I guarantee you somewhere today, a child was physically harmed or ingested poison because they were left alone because a single parent didn’t have any money to take care of them.”

“As surely as we’re having this conversation, children were harmed,” he insisted. “Some physically, some sexually, some were introduced to drugs for the first time, because they were vulnerable and left alone.”

Yes, according to Bevin, the teachers’ desire for a fair pension and a wage that keeps up with basic inflation means that children were raped and poisoned or turned to drugs. Clearly, Bevin thinks teachers hold an important job, if that’s what he sees as the consequences of their absence. So it’s strange that he felt justified in vetoing a recent bill that would increase funding for schools. If he sees teachers as being so essential, he could have talked with the many of them who flooded the Kentucky State Capitol to protest that decision. (That veto was overturned, and not by a close margin.)

Now, Bevin has apologized for his grotesque accusations. Well, sort of. Actually, not at all. Instead, he trotted out the old I’m sorry you interpreted my words to mean the very thing I said line of excuse.

It is my responsibility to represent you, not only when I’m speaking to you but also when I’m speaking on your behalf. It is not my intent to hurt anyone…but to help us all move forward. We need each other. We’re in this together. #WeAreKY https://t.co/2MzQaoJGNk

In a nearly four-minute-long video posted to his Twitter account, Bevin talks about “unintended consequences” and “misunderstandings.”

“Many people have been confused or hurt or just misunderstand what it was that I was trying to communicate,” Bevin said.

Agreed, Bevin. Communicating your thoughts clearly is your responsibility, especially as a public figure. And I look forward to your next statement about how people didn’t “fully appreciate” or “misunderstood” this apology. You know what might help next time? Actually apologizing for the thing you said, not just for people’s “misunderstanding.”

Man Sorry That You Misunderstood What He Said: https://t.co/kvGlxZSvAZ pic.twitter.com/rS8DSa4pb7

Maybe not blaming teachers’ desire for a fair living wage for the hypothetical sexual assault of children in the first place would also be something to consider. Just a suggestion.