Math Predicts Large-Scale Conspiracies Would Fall Apart, Is Probably LIES Anyway so Whatever 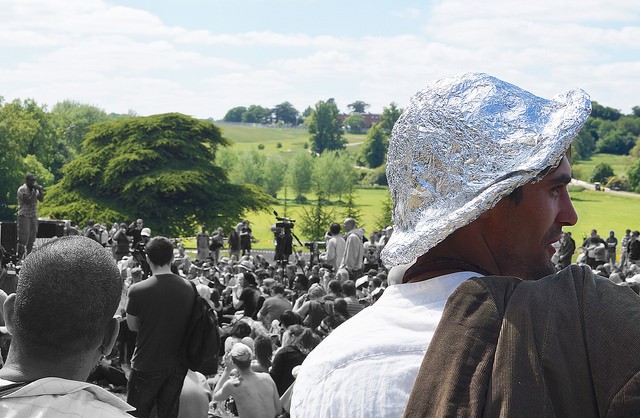 Hey, you know how the entire scientific community has conspired to fool you into thinking vaccines don’t kill you, genetically modified food is safe, and we landed on the Moon? Well it’s no wonder that we found those lying liars out, because a mathematical model has predicted that all these massive cover-ups will eventually collapse under their own weight.

Although, the work to figure this out was done by Dr. Robert Grimes (a fake name if I’ve ever heard one), who’s a physicist working in cancer research. (Lol this liar doesn’t even know what kind of science physics is.) Grimes gets a lot of questions about absurd scientific conspiracy theories, so he tried to model the likelihood of a large-scale conspiracy staying secret under a best case scenario, and the outcome wasn’t good.

We’re not talking about the secret getting blown by your weird relative’s Facebook rants that only use ellipses for punctuation, either. (You know who they/you are.) Any big conspiracy becomes extremely likely to be completely blown by someone on the inside giving out the hard facts of the cover-up. To come up with the findings Grimes published in PLOS One, he looked at some real-world models, including the whistleblowing of Edward Snowden on the NSA. Really, he undertook the process with a desire to understand conspiracies instead of immediately write them off, as he explained in an Oxford University news release:

It is common to dismiss conspiracy theories and their proponents out of hand but I wanted to take the opposite approach, to see how these conspiracies might be possible. To do that, I looked at the vital requirement for a viable conspiracy—secrecy.

However, he concluded that, while conspiracies have existed in the real world, the more people they involve, the more they become likely to have their own Edward Snowden. The release states that the likelihood of length of time until the conspiracy broke down vs. number of participants worked out like this:

For a plot to last five years, the maximum was 2521 people. To keep a scheme operating undetected for more than a decade, fewer than 1000 people can be involved. A century-long deception should ideally include fewer than 125 collaborators. Even a straightforward cover-up of a single event, requiring no more complex machinations than everyone keeping their mouth shut, is likely to be blown if more than 650 people are accomplices.

That was an effort to give a best case scenario for the conspirators, too. Really, it’s hard to imagine even 650 people fully committing to a huge cover-up with no one admitting the truth. Grimes concluded, “Not everyone who believes in a conspiracy is unreasonable or unthinking. I hope that by showing how eye-wateringly unlikely some alleged conspiracies are, some people will reconsider their anti-science beliefs.”

On the other hand, keep on sleuthing, you conspiracy experts. Dr. Grimes says it’s incredibly likely you’ll eventually find your very own Snowden to validate just how much more awake you are than the rest of us. … But he’s just, like, part of the scientific establishment or whatever, so how can you trust him without running the numbers yourself? How can you even trust numbers? Did you invent them? Do you know who did?