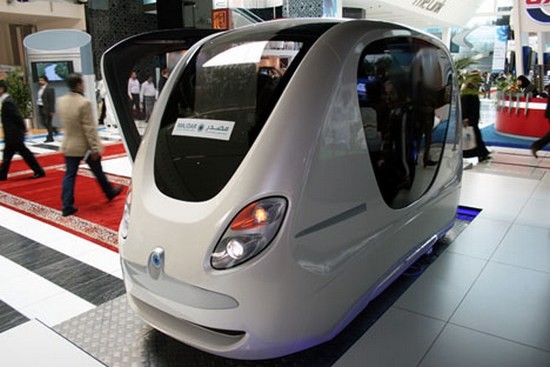 The eco-utopia of Masadar City in Abu-Dhabi has started up a driverless car system, designed to move passengers around the Masadar Institute of Technology. The Dutch-made, and admittedly quite cute, cars whiz along the ground using a network of fiber optic cables and magnets embedded in the ground to find their way. The cars are part of Masadar City’s stated intent to be a self-sufficient city powered on renewable resources with no waste and no carbon emissions.

The model for the system, called Personal Rapid Transit (PRT), which uses a network of small vehicles to move commuters quickly to their destinations. PRT is meant to sidestep a major issue in more traditional, scheduled forms of mass transit because it allows users to skip stops between their location and the desired destination. With a sufficient number of vehicles, users could arrive at their destinations faster than train travel and give the system greater flexibility overall.

The Masadar system, which began operation in November, is only the first step in such a system.

The system has 10 passenger and 3 freight vehicles serving 2 passenger and 3 freight stations connected by 1.2 kilometers of one-way track. The system is in operation 18 hours a day, seven days a week serving the Masdar Institute of Technology. Trips take about 2 and a half minutes (i.e., an average speed of roughly 12 miles per hour) and are presently free of charge. Average wait times are expected to be about 30 seconds.

The major limitation of the system in its current few is the limited number of stops. With only two stations, the prime benefit of PRT is negated since there are no other stops to avoid and speed up commuter travel. At this stage, it’s certainly more of a technology demonstrator, and will have to be expanded upon to prove its worth.

While the driverless cars project certainly has its heart in the right place, experimenting with new ways to move people around with as little an ecological impact as possible. However, I wonder it wouldn’t be more beneficial to encourage Masadar’s denizens to make use of another eco-friendly transportation method: walking.

To see the cars in action, and the observe their disconcerted passengers, read on after the break.

(Image and story via Engadget)