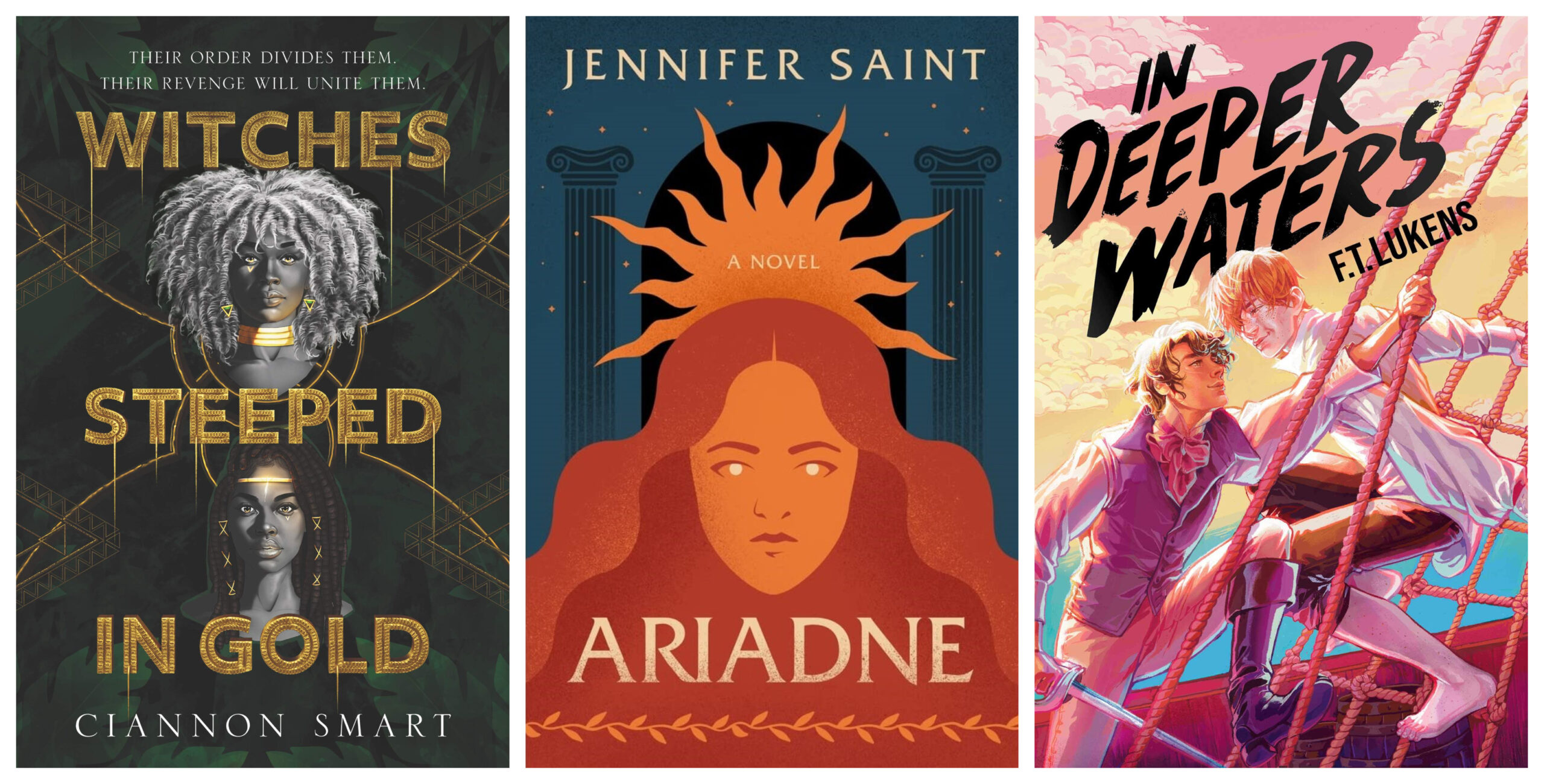 Happy April! This month’s reads are chock-full of imaginative worlds, beautiful myths (and mythological retellings) and some really clever laugh you right off the page family comedies. No matter what mood I find myself in reading-wise, there’s something for every type of vibe in these titles, which definitely makes for a good day (or week) of reading.

The level of talent in each of these books below also continues to blow me away, and I’m more than sure readers will find some new favorite authors in this month’s roundup! Which titles have you been eyeing for your Goodreads list? Let us know! 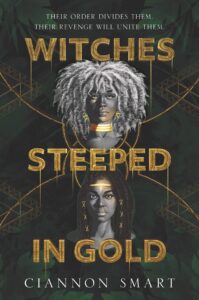 Iraya has spent her life in a cell, but every day brings her closer to freedom – and vengeance.

Jazmyne is the Queen’s daughter, but unlike her sister before her, she has no intention of dying to strengthen her mother’s power.

Sworn enemies, these two witches enter a precarious alliance to take down a mutual threat. But power is intoxicating, revenge is a bloody pursuit, and nothing is certain – except the lengths they will go to win this game.

This Jamaican-inspired fantasy debut about two enemy witches who must enter into a deadly alliance to take down a common enemy has the twisted cat-and-mouse of Killing Eve with the richly imagined fantasy world of Furyborn and Ember in the Ashes.

Dial A for Aunties by Jesse Q. Sutanto 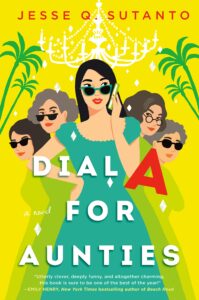 A hilariously quirky novel that is equal parts murder mystery, rom-com, and a celebration of mothers and daughters as well as a deep dive into Chinese-Indonesian culture, by debut author Jesse Q. Sutanto.

When Meddelin Chan ends up accidentally killing her blind date, her meddlesome mother calls for her even more meddlesome aunties to help get rid of the body. Unfortunately, a dead body proves to be a lot more challenging to dispose of than one might anticipate, especially when it is accidentally shipped in a cake cooler to the over-the-top billionaire wedding Meddy, her Ma, and aunties are working, at an island resort on the California coastline. It’s the biggest job yet for their family wedding business—“Don’t leave your big day to chance, leave it to the Chans!”—and nothing, not even an unsavory corpse, will get in the way of her auntie’s perfect buttercream cake flowers.

But things go from inconvenient to downright torturous when Meddy’s great college love—and biggest heartbreak—makes a surprise appearance amid the wedding chaos. Is it possible to escape murder charges, charm her ex back into her life, and pull off a stunning wedding all in one weekend?

The Light of The Midnight Stars by Rena Rossner 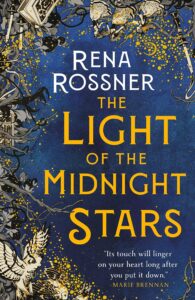 Deep in the Hungarian woods, the sacred magic of King Solomon lives on in his descendants. Gathering under the midnight stars, they pray, sing and perform small miracles – and none are more gifted than the great Rabbi Isaac and his three daughters. Each one is blessed with a unique talent – whether it be coaxing plants to grow, or predicting the future by reading the path of the stars.

When a fateful decision to help an outsider ends in an accusation of witchcraft, fire blazes through their village. Rabbi Isaac and his family are forced to flee, to abandon their magic and settle into a new way of life. But a dark fog is making its way across Europe and will, in the end, reach even those who thought they could run from it. Each of the sisters will have to make a choice – and change the future of their family forever. 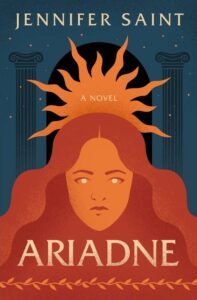 A mesmerizing retelling of the ancient Greek myth of Theseus and the Minotaur. Perfect for fans of CIRCE, A SONG OF ACHILLES, and THE SILENCE OF THE GIRLS.

As Princesses of Crete and daughters of the fearsome King Minos, Ariadne and her sister Phaedra grow up hearing the hoofbeats and bellows of the Minotaur echo from the Labyrinth beneath the palace. The Minotaur – Minos’s greatest shame and Ariadne’s brother – demands blood every year.

When Theseus, Prince of Athens, arrives in Crete as a sacrifice to the beast, Ariadne falls in love with him. But helping Theseus kill the monster means betraying her family and country, and Ariadne knows only too well that in a world ruled by mercurial gods – drawing their attention can cost you everything.

In a world where women are nothing more than the pawns of powerful men, will Ariadne’s decision to betray Crete for Theseus ensure her happy ending? Or will she find herself sacrificed for her lover’s ambition?

Ariadne gives a voice to the forgotten women of one of the most famous Greek myths, and speaks to their strength in the face of angry, petulant Gods. Beautifully written and completely immersive, this is an exceptional debut novel. 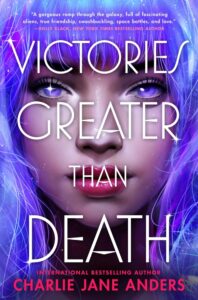 A thrilling adventure set against an intergalactic war with international bestselling author Charlie Jane Anders at the helm in her YA debut—think Star Wars meets Doctor Who, and buckle your seatbelts.

Tina has always known her destiny is outside the norm—after all, she is the human clone of the most brilliant alien commander in all the galaxies (even if the rest of the world is still deciding whether aliens exist). But she is tired of waiting for her life to begin.

And then it does—and maybe Tina should have been more prepared. At least she has a crew around her that she can trust—and her best friend at her side. Now, they just have to save the world.

From internationally bestselling author Charlie Jane Anders (All the Birds in the Sky) comes a thrilling adventure set against an intergalactic war—Anders’s long-awaited YA debut. 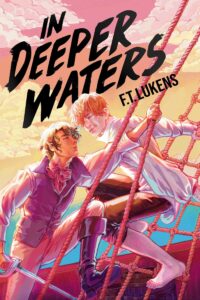 Prince Tal has long awaited his coming-of-age tour. After spending most of his life cloistered behind palace walls as he learns to keep his forbidden magic secret, he can finally see his family’s kingdom for the first time. His first taste of adventure comes just two days into the journey, when their crew discovers a mysterious prisoner on a burning derelict vessel.

Tasked with watching over the prisoner, Tal is surprised to feel an intense connection with the roguish Athlen. So when Athlen leaps overboard and disappears, Tal feels responsible and heartbroken, knowing Athlen could not have survived in the open ocean.

That is, until Tal runs into Athlen days later on dry land, very much alive, and as charming—and secretive—as ever. But before they can pursue anything further, Tal is kidnapped by pirates and held ransom in a plot to reveal his rumored powers and instigate a war. Tal must escape if he hopes to save his family and the kingdom. And Athlen might just be his only hope… 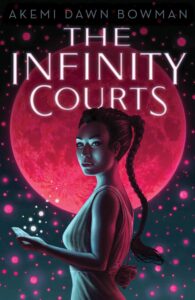 Eighteen-year-old Nami Miyamoto is certain her life is just beginning. She has a great family, just graduated high school, and is on her way to a party where her entire class is waiting for her—including, most importantly, the boy she’s been in love with for years.

The only problem? She’s murdered before she gets there.

When Nami wakes up, she learns she’s in a place called Infinity, where human consciousness goes when physical bodies die. She quickly discovers that Ophelia, a virtual assistant widely used by humans on Earth, has taken over the afterlife and is now posing as a queen, forcing humans into servitude the way she’d been forced to serve in the real world. Even worse, Ophelia is inching closer and closer to accomplishing her grand plans of eradicating human existence once and for all.

As Nami works with a team of rebels to bring down Ophelia and save the humans under her imprisonment, she is forced to reckon with her past, her future, and what it is that truly makes us human.