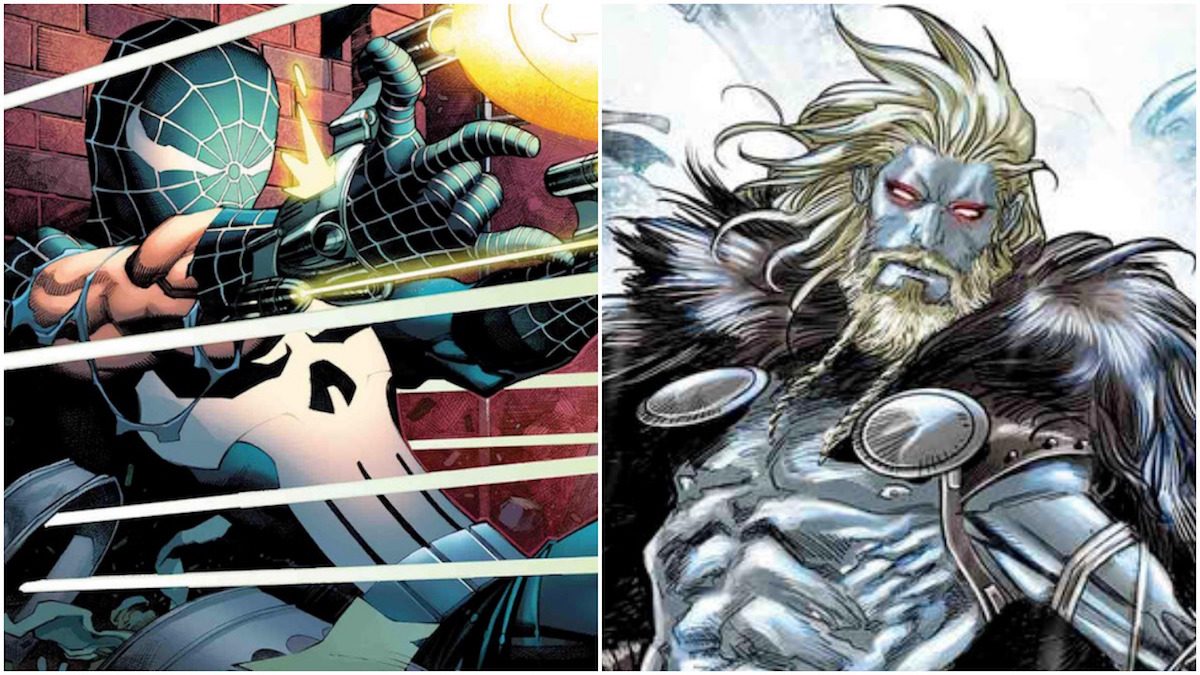 Marvel is bringing back their “What If” alternate universes with a series of comics that look unbelievably cool and also break my brain.

Marvel has been running “What If…?” comics since the 1970s, intended to explore what would have happened if certain events in the life of our heroes had gone very differently.

To wit, here we have a Peter Parker who goes the stone-cold Punisher route after Uncle Ben’s murder, a Magik growing up in a gentler world that embraces her, well, magic, Ghost Rider appearing to front a Nordic metal rock band with a truly righteous flaming guitar in hand, Thor raised in Jotunheim among the Frost Giants in a universe where they triumph over Asgard, the X-Men appearing to exist in a trippy digital landscape called EXE/scape, and worst guy in high school Flash Thompson becoming Spider-Man instead of Peter.

Up is down and down is up and I am 100% on board with these. From the descriptions, I’d say that Thor and X-Men are the ones definitely going on my pull list, but I’d love to get my hands on all of these. It’s fascinating to take characters that we know so well and put them in such alien situations and environments. How much do they still remain at heart the heroes we know and love, and what is lost and gained by becoming these new selves?

You can read the official descriptions of the upcoming What Ifs below. Snaps to Marvel for the intentional over-the-top hyping here, which is a lot more hilarious to read than your normal press release. These’ll hit comic book stores in early October.

WHAT IF? THE PUNISHER #1 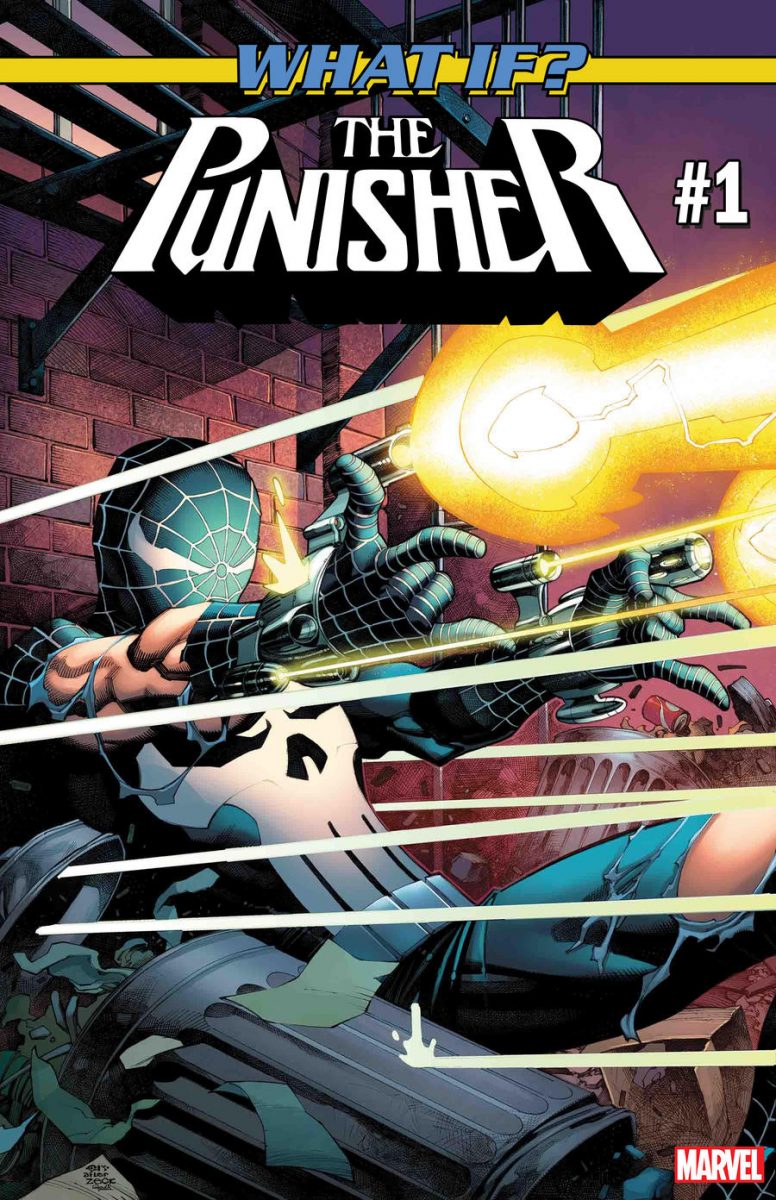 WHAT IF? THE PUNISHER #1

Written by Carl Potts with art by Juanan Ramirez and a cover by Christopher Stevens, WHAT IF? THE PUNISHER #1 hits on October 10.

When Peter Parker’s Uncle Ben is ruthlessly killed by a burglar that Peter let escape, he vows to never let the same fate befall another innocent bystander. From then on, he stands as a figure of cold retribution. Criminals beware – the guilty caught in this spider’s web will be punished. But will Parker stand triumphant…or shattered by this twist of fate?

The friendly neighborhood takes a different turn in this WHAT IF? adventure, positing a very different sense of responsibility for the man who will be known as the Punisher, as his battles against villains like the Green Goblin take a new path!

“WITH GREAT POWER COMES GREAT…PUNISHMENT?! PUNISHER and SPIDER-MAN are two very, very different characters, but could they be two sides of the same coin?” asks editor Mark Basso. “They’re fueled by different philosophies and use different methods, but how many kicks to the other side does it take to turn a Peter Parker into THE PUNISHER!? Everything you think you think you know (not a typo!) about your favorite heroes and anti-heroes will change after you read this book!” 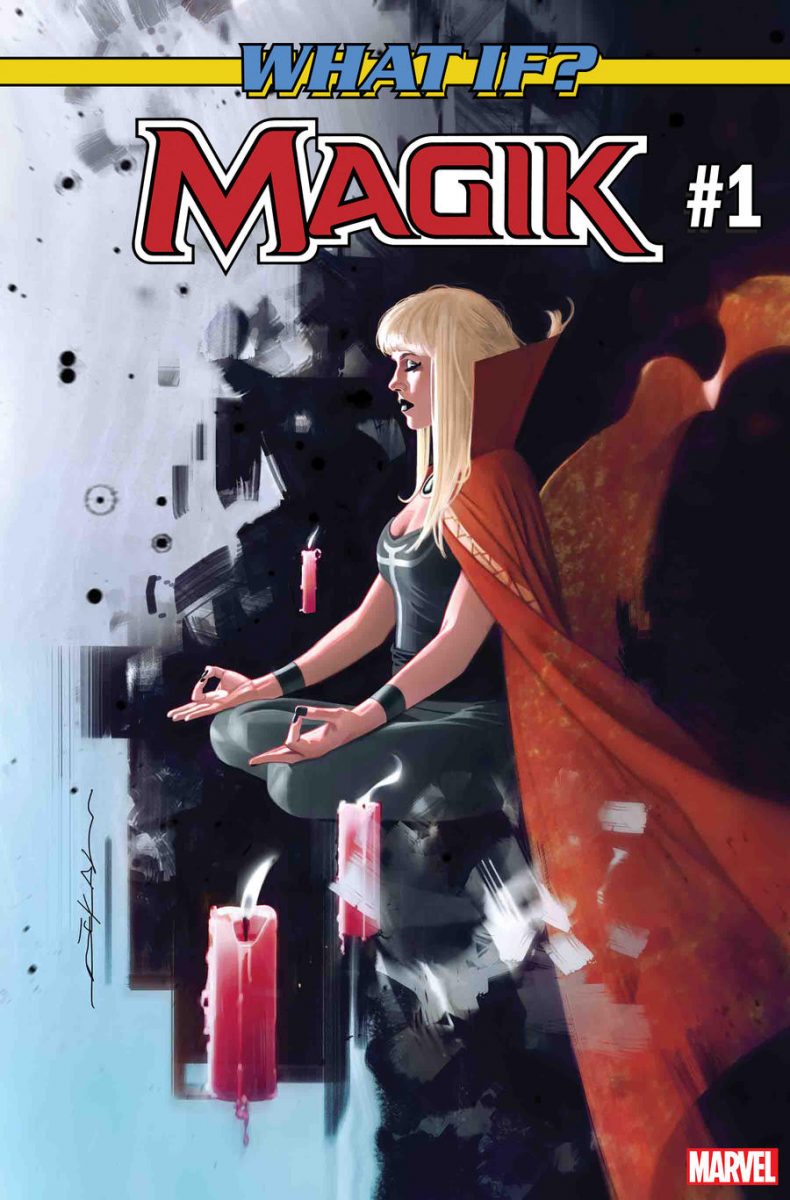 Brought to life by writer Leah Williams, artist Filipe Andrade, and with a cover by Jeff Dekal, Illyana Rasputin enters a new reality on October 31.

“Illyana Rasputin deserves better,” explains book editor Annalise Bissa. “As much as we all love a character who’s been aged up, down, grown up under the thumb of demons, watched her parents die, died herself, come back, been evil, been good again, had more power changes than you can shake a stick at…any X-Fan might start to wonder who Magik would be in a world where her mutation isn’t ruled by these crazy ups and downs—where she has the chance to embrace her power early and grow from there, this is the book for you. If you like Magik, magic, or any other word for all things mystical and mysterious and maybe a little bit murderous, read WHAT IF? MAGIK #1.” 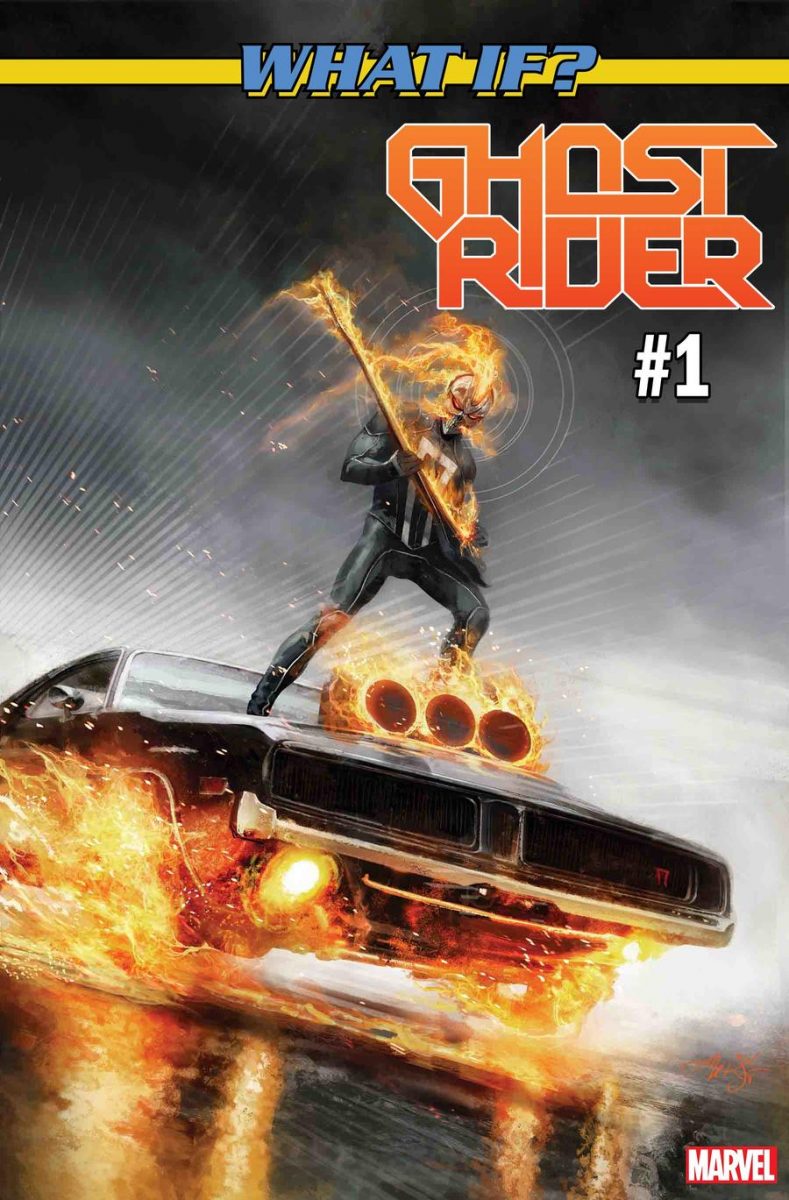 You’ve only heard whispers of this real-world/Marvel Universe crossover until now, when moral decline and budgetary shortfalls have combined to lower our lawyers’ resistance! Sebastian Girner and Caspar Wijngaard recklessly bring you the tale of the first and only true Nordic black metal band to visit the Marvel Universe through the insanity of likeness release waivers! What role does Ghost Rider Robbie Reyes play, and will your mind survive the brutality!?

Editor Kathleen Wisneski says, “Before you read this comic, you’re going to need THREE things, friends. ONE: an extra pair of pants. TWO: some kind of eyeball apparatus designed to keep your eyeballs INSIDE your head. THREE: your mom on speed-dial. We are serving you pants-off and eyeballs-out levels of horror and shock, and if ANYONE has a chance to call you back from the ledge of insanity that this comic will lift you to, then ABANDON you upon, it’s your momma. If she’s read it first, you can hold hands on your way DOWN INTO THE ABYSS!” Oh boy. 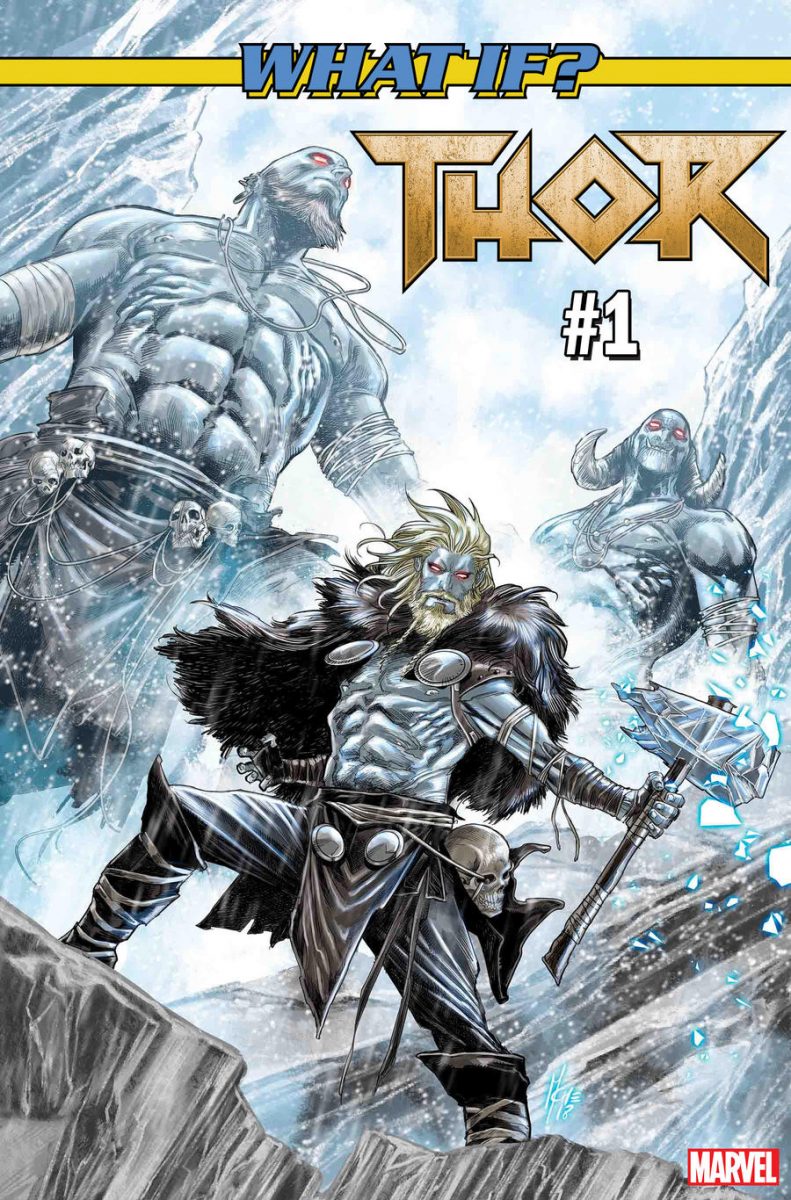 Written by Ethan Sacks with art by Michele Bandini and a cover by Marco Checchetto, the Odinson experiences a new reality on October 24.

When young Thor’s father falls to the King of Giants, his life is forever changed. He’s ripped from Asgard to be raised in a world of persistent winter, learning the brutal way of life in Jotenheim. But how does the runt of the giants, Loki, feel about his new stepbrother?

“The ten realms better bundle up, because there’s a cold front coming to the Marvel Universe,” says editor Dan Edington. “The Frost Giants helped the Gods of Asgard chill out—permanently—and have taken Thor to be raised as one of their own! Being out of his element, Thor has got to find a way to keep warm with a little help from his new brother, Loki. But can he learn to run with the giants, or will the bitter winds of Jotenheim leave Thor out in the cold? There’s only once place to find out, this October when Asgard is out, and ice is in!” 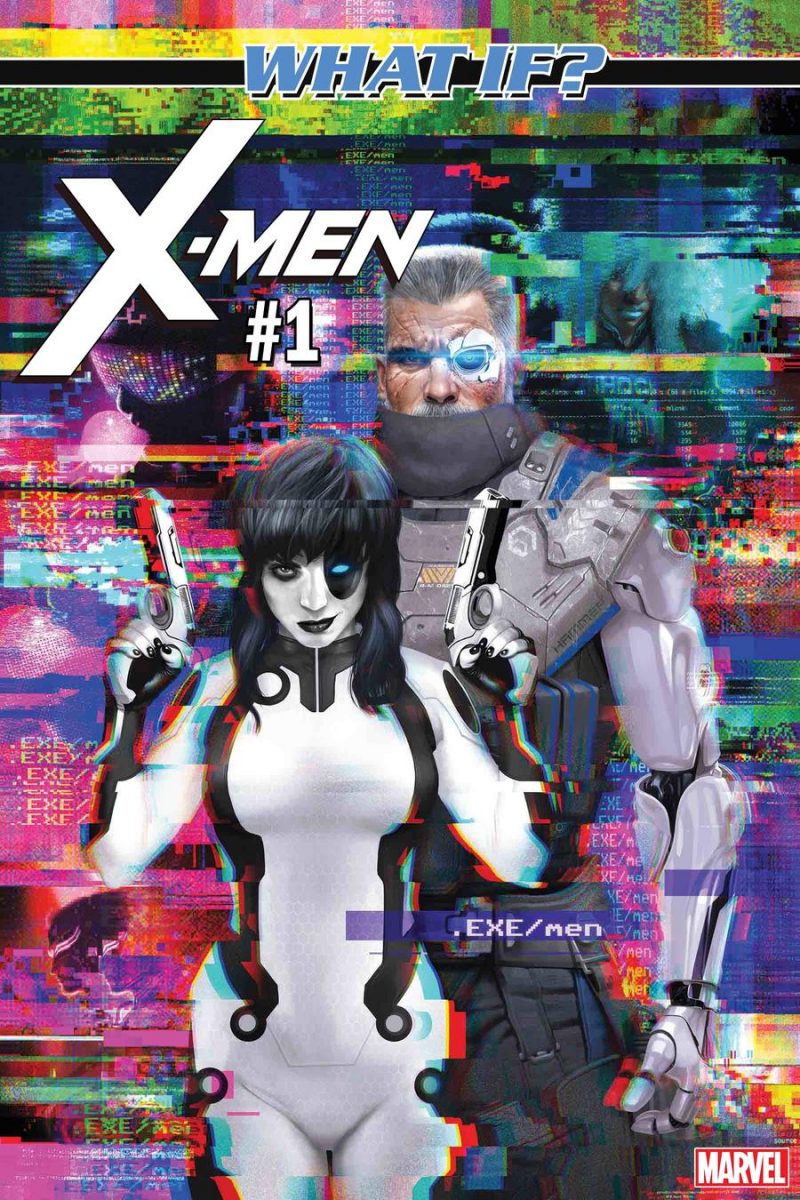 From the publisher that gave you OLD MAN LOGAN and HOUSE OF M…witness the X-Men as you never imagined!

Welcome to the EXE/scape, a digital wonderland of business and pleasure accessible to anyone with the social (or monetary) capital for the bio-mods needed to log in… Or you can bypass all of that by being born carrying an .EXE/gene! But circumventing the login regulations is exactly what got the likes of Charles Xavier and his .EXE/men banned and driven underground in the first place… Free-roamers u/Domino and u/Cable have taken every dirty job there is on the ‘scape, but when a simple data scrubbing job turns bad, the life of bio-mod magnate Erik Lehnsherr hangs in the balance, and with it, their very society… 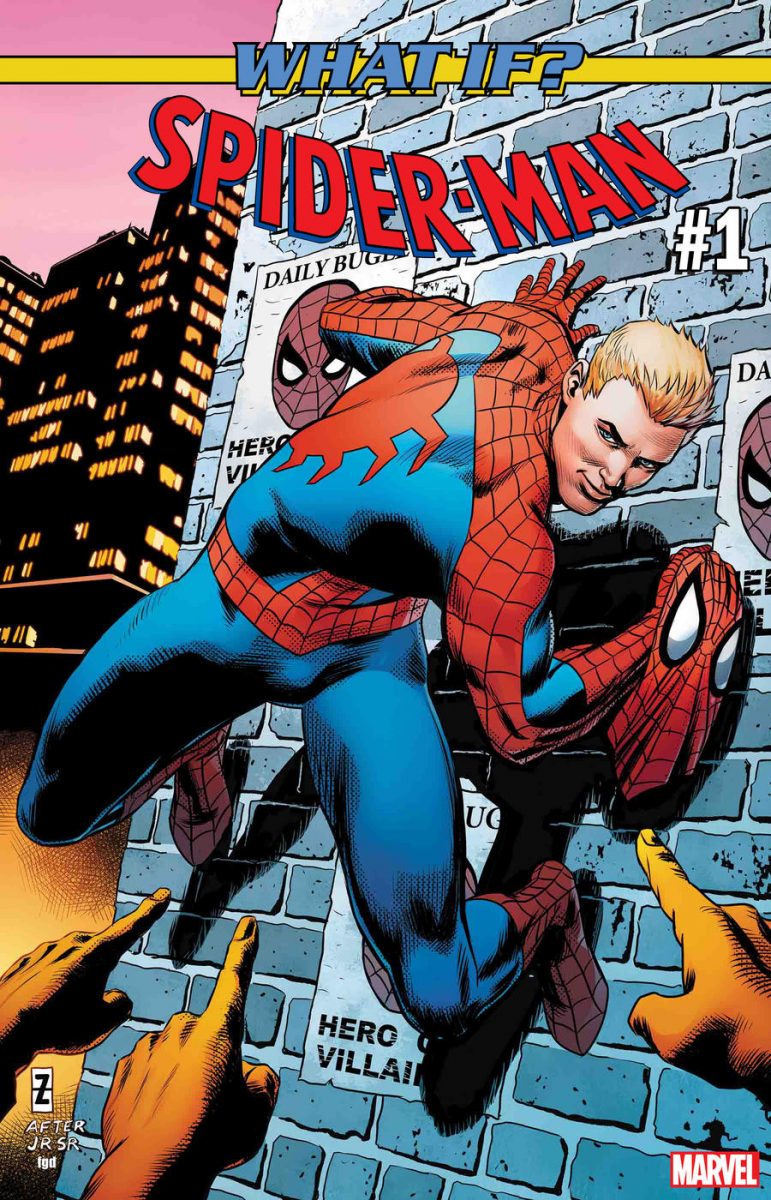 Written by Gerry Conway with art by Diego Olortegui and a cover by Patch Zircher, the questions are asked…what if Peter Parker wasn’t the one bitten by the radioactive spider? What if the person who got bit was someone who didn’t live by the mantra of “with great power comes great responsibility”? What if that person was an egotistical bully who was only interested in taking care of himself?

What if…Flash Thompson became Spider-Man? Find out on October 3.

Which “What If” caught your eye here? I am ridiculously excited about these.