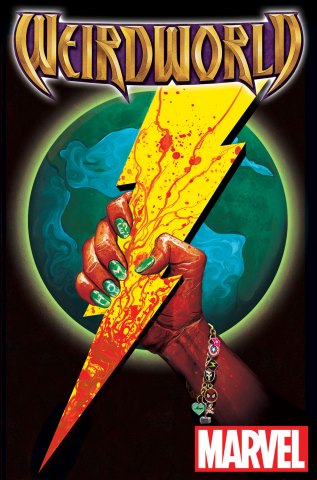 I’m not really into the fantasy genre, and so if I ever read or watch anything featuring wizards or swords or dragons, it needs to be really interesting or compelling outside the trappings of that genre. I think I might need to make Marvel’s upcoming ongoing title, Weirdworld, one of my exceptions.

The smash-hit Secret Wars series is back! And just when you thought the journey was coming to an end. This December, book a trip to the strangest place in the entire Marvel Universe in the all-new WEIRDWORLD #1 – coming at you from blockbuster writer Sam Humphries (Legendary Star-Lord) and fan-favorite Weirdworld artist Mike Del Mundo! Ripped from the pages of Secret Wars comes a most dangerous destination – chock full of swords, sorcery, rocket launchers and all manner of oddities firmly planted in the All-New Marvel Universe!

Meet Becca, an ordinary teenage girl trapped in an extraordinary world. Stranded in Weirdworld and separated from all she knows, her mission is clear – GET HOME ALIVE! Easier said than done. Crystal Warriors! Wizardslayers with muscle cars! Catbeasts that spit fire! The queen of sinister sorcery Morgan Le Fay! All this and more await Becca around every corner. Can she make it home in one piece? Or is she Weirdworld’s newest permanent resident?

Strap in and hang on tight as the newest corner of the Marvel Universe comes alive before your very eyes as Humphries and Del Mundo plunge you headlong into WEIRDWORLD #1 this December! 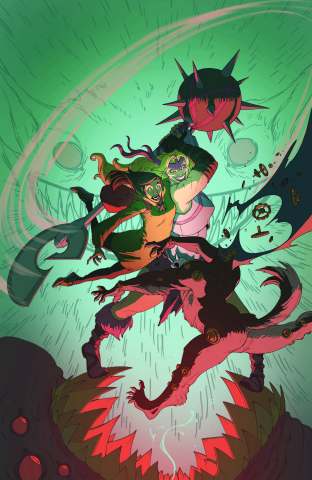 Sounds pretty awesome, particularly because of the mix of regular world and genre weirdness, but also because of a new female protagonist in the Marvel Universe. Even better, she’s not the only one. Weirdworld features two female leads on the buddy-fantasy road trip/quest of the decade! Or something. It seems cool, okay?

The Mary Sue had the chance to be on a press call with some of Weirdworld’s creative team: writer, Sam Humphries; and editors Tom Brevoort and Alanna Smith. They talked about these awesome new protagonists, this colorful new location in the Marvel Universe that will be featured across several titles, and the upside of getting to be totally weird! 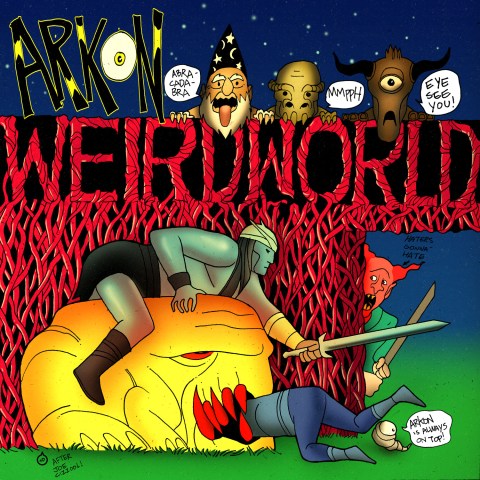 On the shift in focus from the Weirdworld book during Secret Wars, particularly from Arkon to the two female leads of Weirdworld #1, Becca and Goleta:

Sam Humphries: Jason and Mike did such a great job coalescing Weirdworld, and they put some fantastic great elements on the table of what Weirdworld is, and one of the biggest things they put down was that Weirdworld is a place where anything can happen. And they assembled a bunch of previous Marvel Universe properties from various iterations of Marvel – fantasy world like Arkon and Skull the Slayer – and firmly placed them within the world of Weirdworld. I thought that going into a new ongoing series, a great way to explore that world and see what we’re dealing with is through two new characters.

My second favorite thing about Weirdworld that Jason and Mike introduced is that Weirdworld is a place where the lost can be found, and in this world of bloodthirsty Sasquatches and swords and action, that was a very sweet and charming and romantic notion to me that I wanted to embrace.

So, we have two characters: one is Becca, who’s from the regular life on Earth. She’s a teenager, and she has her own tragic plot that gets interrupted by being thrown into Weirdworld. And then we have Goleta, who’s a tall, strong wizard slayer who’s from Weirdworld, but she’s also lost in her own way. Just in terms of trying to figure out where she goes, and what her mission is in life. They come together, and they argue, but they have very parallel paths and they become kindred spirits.

I’m trying to embrace the mantra that anything can happen, and part of that mantra is inventing these new characters and following them through Weirdworld and seeing it through their eyes. 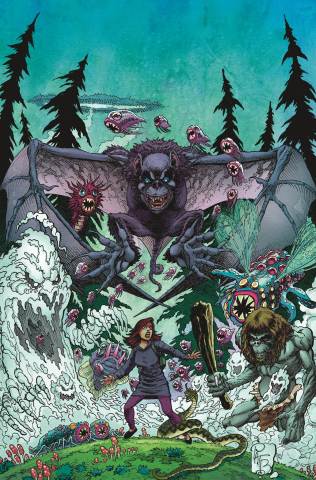 On Becca and Goleta’s journey:

Humphries: The important thing to know about Weirdworld is that it’s just as real as Avengers Mansion. This is not an alternate universe, this is not a different planet…this takes place on Earth, and to use the Savage Land as an example, in that it has some remove from something like, say, Central Park. Weirdworld is separated from a place like Central Park through magic, and that magic is starting to break down. As the walls become more porous, things start to happen.

Like, the last page of Jason and Mike’s Weirdworld, we saw a normal commercial airliner crash into Weirdworld, and on the first page of my and Mike’s Weirdworld, we see that Becca was on that flight. And without spoiling it, Becca has her own personal tragedy that she’s dealing with that has nothing to do with anything like wizards or robots or vampires. It’s an intensely personal journey that she’s in the middle of when we meet her. And she’s got this added complication in that she has to figure out how to get home.

Weirdworld is an immediately hostile place for her, because she’s just a teenager and has no idea how to deal with goblins grabbing her out of the sky and all that kind of stuff. And she meets Goleta, who’s very brash, very loud, very self-centered in her way and completely focused on hunting down every wizard she can hunt down and find. Goleta ends up being Becca’s best hope of surviving this world and figuring out the way to navigate it, so the two of them are thrown together, and as they travel on their quest, they get to know and trust each other more.
The third part of this quest that we can’t spoil is that there’s this new creature called Catbeast that we meet immediately in issue one and sets the whole quest in motion, but the nature of Catbeast, beyond the fact that he is cute and he is deadly, I cannot go into right now.

On the advantage of Weirdworld as a new setting for Marvel stories:

Tom Brevoort: Well, when I was growing up reading comics in the 70s Marvel – and not just Marvel, but other companies, too – weren’t just about super heroes. There were a wide variety of genres, whether it was sorcery, or war comics, science fiction comics, fantasy. There are all these sorts of colors that over the years have fallen by the wayside a little bit, and really personalized by the fact that Marvel no longer has Conan. Conan was such a big part of Marvel in that era. You look at any of the merchandising that was done, or any of the promotion, and there’s Spider-Man, The Hulk, Captain America, and Conan. It was those four characters that you would see everywhere. It was such a big thing.

So going into and coming out of Secret Wars, we said it’d be nice to have a place where we could scratch that itch a little bit. And not just one of them, but we built this in a way where Weirdworld isn’t as simple as just a Conan-land that we dropped into the middle of the universe, but it’s a little bit of all of these things depending on where you go and what corner you turn. It gives you a great latitude to tell a bunch of different types of stories in the context of the Marvel Universe. Stories that can affect characters that we care about and that we deal with.

Black Knight is taking place partly in Weirdworld, that book is out already. The X-Men are gonna go there in Jeff Lemire’s book in not too long. This is a place where even typical, known Marvel characters will be able to pass through and have adventures like a Savage Land.

Alanna Smith: And I think it’s been a really fun playground for our creators to throw their characters into. Most of the time, they’ll be like Oh, what’s the reference for this? What does this look like? And I don’t send reference for Weirdworld. I’m like, Just draw it. If it’s weird, it’s probably there. Someone was emailing me and was like How do I draw the ogres? And I was like, Don’t draw the ogres, draw something new. And they said, How about these rhinoceros goblins that ride around in tanks? And I was like, Yes! Do that! So, that’s been a blast – to see the different things people are coming up with. 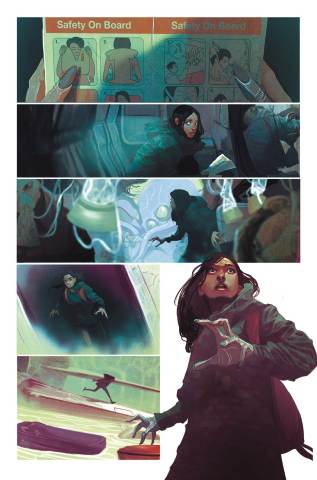 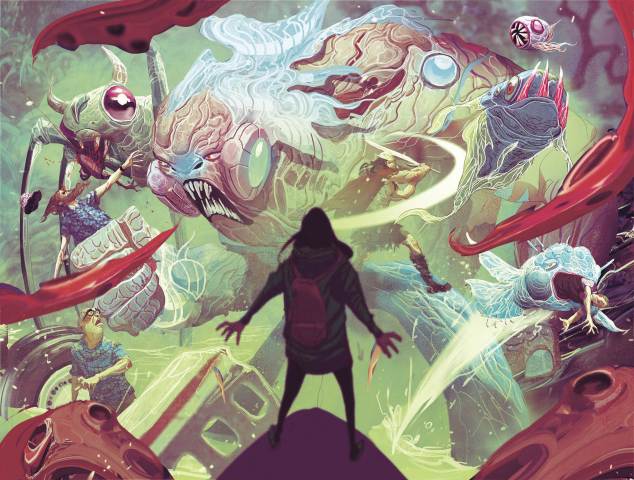 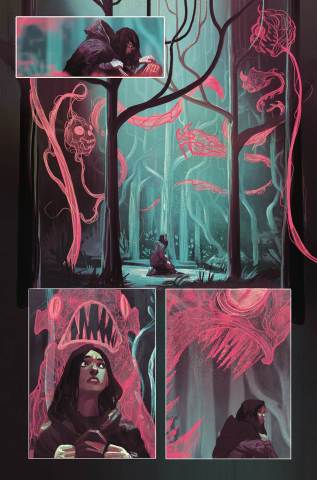 I asked the team, considering that Becca is from our “normal” world and Goleta is a Weirdworld native, if Becca seems “weird” to Goleta. What would seem weird to someone from Weirdworld, and will we be seeing anyone in Weirdworld who secretly wants to be a part of our non-magical realm?

Humphries: Yeah, that’s a great question, and the answer is yes. Becca would seem fairly normal to us compared to something like a rhino driving a tank, but to Goleta, Becca is, in some ways, unfathomable. There are situations where Becca is like I’ve never even seen a wizard, much less met one and killed one. And that is something that is completely unbelievable to someone like Goleta. But there is an interesting that we’re exploring in the relationship between Weirdworld and Earth, and what people in Weirdworld think about Earth, and – I don’t want to give too much away – there’s a creation myth of sorts for Weirdworld. A belief that the people of Weirdworld have about where Weirdworld came from, and how this land of very disparate parts came together, and Earth features very importantly into that creation myth, and into the larger war between Morgan Le Fay and Jennifer Kale.

Being fascinated with the job of the comics editor and how they shape stories, I asked Brevoort and Smith specifically what they felt was their mark on Weirdworld, and what made this title personal for them.

Brevoort: For me, it’s personal in that I invented it. [laughs] We were sitting around including all the domains we had from the seventies, and I arranged them in a certain way and said I wanna do a thing, and we’ll call it Weirdworld, and this is how it works. During the first retreat where we were laying out Secret Wars, after that part of the conversation, Jason Aaron came to me and said I really like to write that. And he kind of went off and made it his own Weirdworld. So, to me, I sort of feel, if not a fatherly feeling toward the whole of Weirdworld, then at least a grandfatherly, or a godfatherly one in that this all exists because I came up with the nugget of the idea.

Humphries: [Interjecting] Tom is the Gandalf of this project.

Smith: For me, it’s just the type of story that I’ve always loved growing up. This young girl who ends up in a strange world, and gets kicked around for a while, but realizes that she is up to the challenge of surviving this world. It’s been a blast to work on. I’m always the one giving the notes like Oh, let’s give Becca and Goleta more interaction. Because their relationship is really nuanced and fascinating. And they struggle with each other, because they’re very different people, but there’s a connection there that is building over time. Plus, I love high fantasy, and I didn’t think when I got hired at Marvel that I would get to do a high fantasy comic, so that was awesome.

Weirdworld #1 comes out this week on Wednesday! Will you be picking it up?