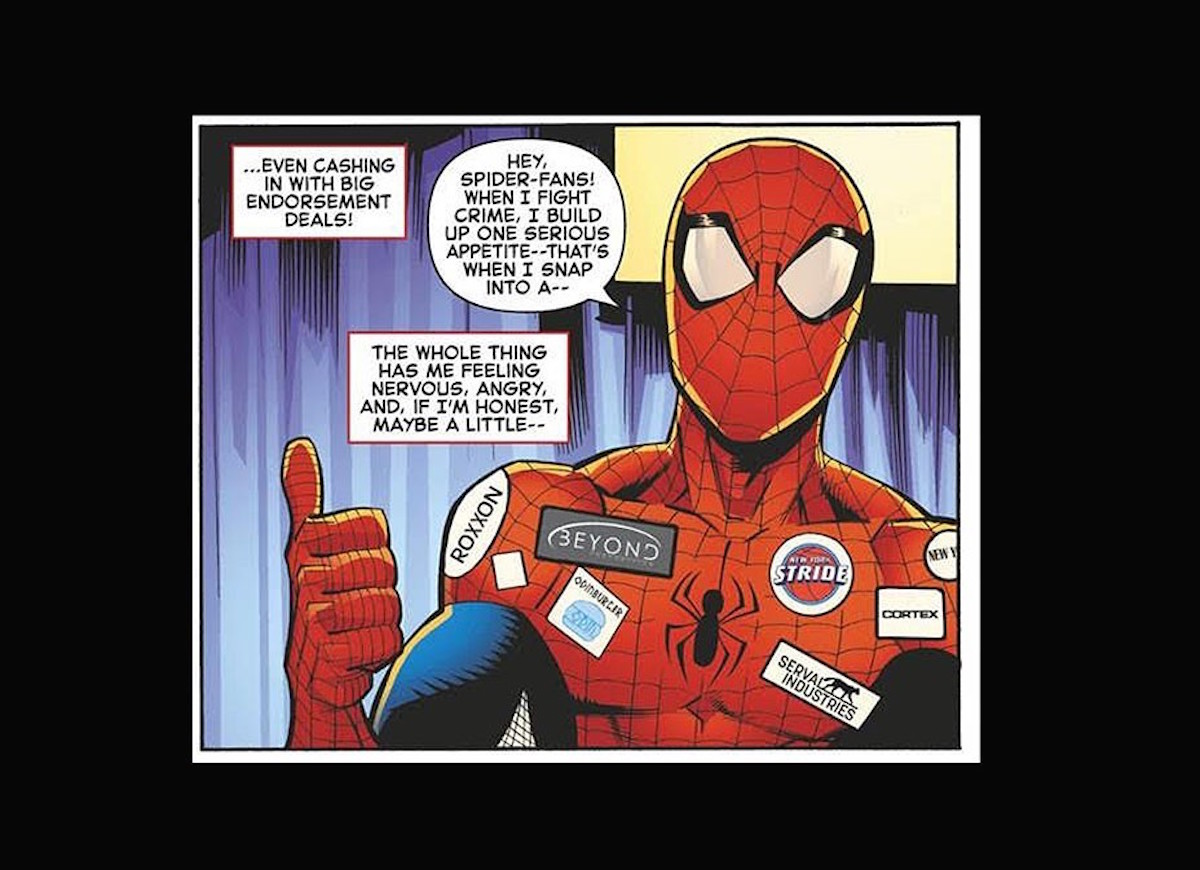 In the recent Amazing Spider-Man #4 comic, a panel by artist Ryan Ottley was found to contain a reference to a book that questions Mormon doctrine. Marvel is scrubbing the art, with the official statement that they do not allow for hidden messages in their artwork.

Amazing Spider-Man #4, written by Nick Spencer and drawn by Ottley, features a panel where Spidey can be seen covered in corporate endorsement patches. Prior to revising the piece, one of the patches read “CES Letter.” As Graeme McMillan at The Hollywood Reporter explains:

[CES Letter is] a book written by ex-Mormon Jeremy Runnells in which he explores what he describes as the “troubling origins, history and practices” of his former faith. Future uses of the artwork, whether in digital release or reprinting, as well as collected editions, will feature revised artwork that removes the reference, as well as Ottley’s other original images and logos.

In response to discovering the meaning behind the reference, Marvel’s official statement to THR made it clear that they did not condone the inclusion, and that it was their policy not to allow “hidden controversial messages” into their art.

“The art reference in Amazing Spider-Man #4 was included without awareness by Marvel of its meaning,” Marvel told THR. “As a policy, Marvel does not permit hidden controversial messages in its artwork. The reference will be removed from all subsequent printings, digital versions and trade paperbacks.”

Ryan Ottley, in a statement to THR, explained that the “CES Letter” appearance was his decision alone, stemming from what sounds like a long personal history with the Church of Latter-day Saints:

“I’ve spoken with Marvel about my recent artwork, and I have no animosity toward members of the Church of Jesus Christ of Latter-day Saints,” he said. “My entire family are members, as are many of my friends, and I would never include anything mean-spirited about them or their beliefs. The reference was in regards to a subject I am interested in and a personal decision I made in my life. It has nothing to do with the character, the story or Marvel.”

I’m of two minds about what happened here. First of all, a book discussing the history of a religion and addressing doubts does not necessarily make it “anti-Mormon,” as many outlets are reporting. While it’s clear that Runnells’ book is critical of the Mormon church and what he sees as the anachronisms and errors in its holy book, teachings, and practices, this is hardly a Protocols of the Elders of Zion moment.

Runnells’ “Letter” is deeply researched and seems to have emerged from a crisis of his own faith. “An Eagle Scout, Returned Missionary, BYU alumnus, Jeremy was married in the San Diego Temple with expectations and plans of living Mormonism for the rest of his life,” Runnells’ biography on the CES Letter site reads.

Still, considering the sheer amount of art that Marvel Comics turns out, it makes sense that they would have a blanket policy in place meant to prevent artists from including messages concerning their own opinions or politics that are unrelated to the story. There’s no reason why Spider-Man should be sporting a patch concerning a debate about Mormonism.

This seems to me like a mostly harmless inclusion as far as hidden messages go, but it’s a slippery slope, and I could understand why members of the Church of Latter-day Saints might be offended by it. While the media coverage is likely to generate far more interest in Runnells’ book than a tiny patch that might otherwise have gone unnoticed (included alongside such in-comics corporate entities as “Odinburger“), Marvel was right to remove the reference. I hope that Ottley sees no further repercussions.

The digital art has already been updated to reflect the changes, and a new print run of the comic will hit shelves on September 19th.