Marvel Comics just announced that it’s a brand new day for their comics properties. With the departure of former Marvel architect Brian Michael Bendis (creator of Jessica Jones and Miles Morales) to DC Comics, it seems that they’re taking the opportunity to make some big changes. Don’t worry, those characters aren’t going anywhere. In fact, it seems like there are positive changes in the works, in large part inspired by the MCU. Check out the announcement video above!

While he doesn’t say much about what exactly the changes entail, Editor-in-Chief C.B. Cebulski enthuses, “I can say, walking through these halls, I have never seem more enthusiasm and more excitement for where Marvel Comics is going this year. Not since Marvel NOW! have we have we had such an overarching, line-wide change of talent on the Marvel Comics line.”

Marvel also released some pretty sweet preview art by Jim Cheung to give us a glimpse of the characters that will be making up this “fresh start” that the publisher is excited about: 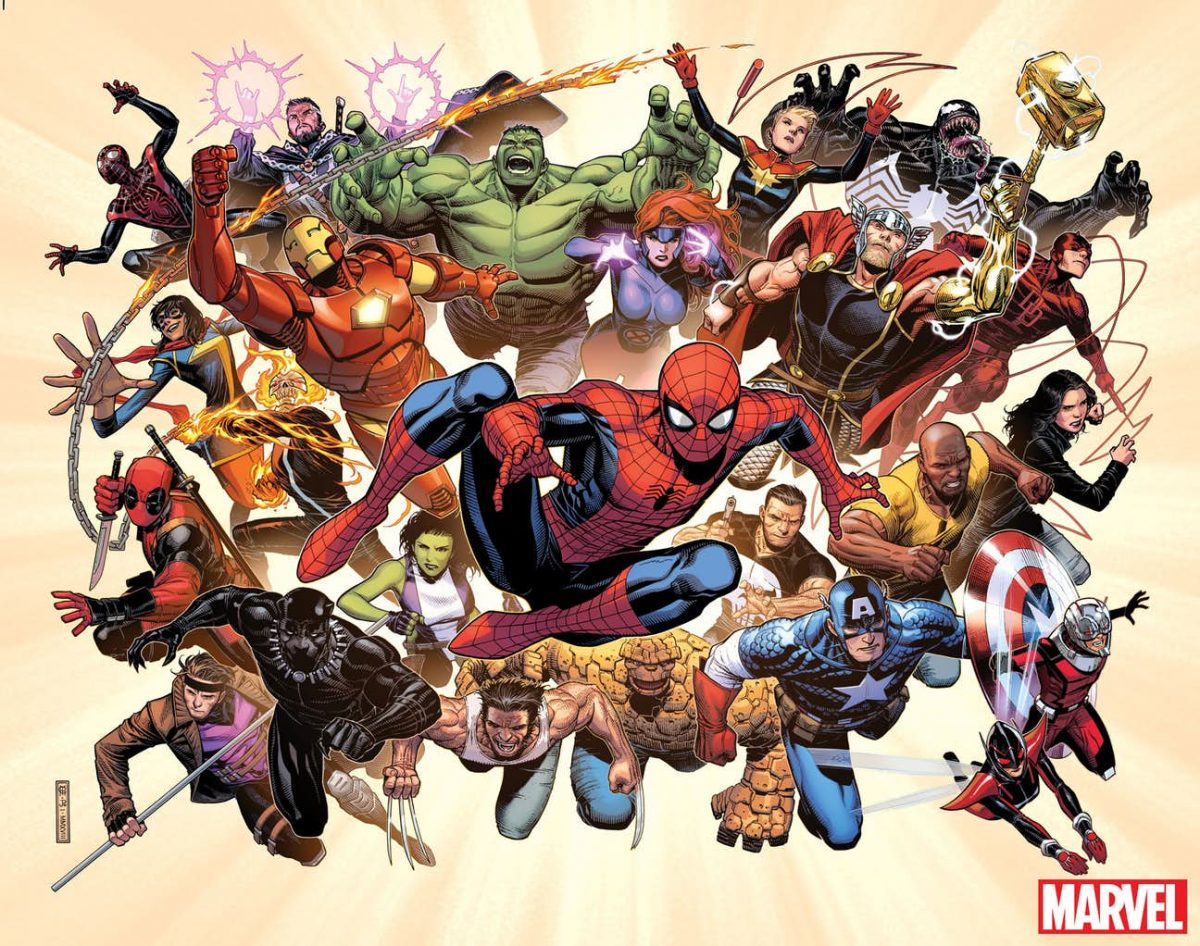 Obviously, I’m thrilled to see my faves Kamala Khan (a.k.a. Ms. Marvel) and Miles Morales (a.k.a. Spider-Man 2.0) intact, along with Black Panther, Captain Marvel and Jessica Jones. But if I’m being honest, the thing I’m most excited about is the emphasis (certainly in the video) of the addition of Ant-Man and the Wasp!

I’ve always been fascinated by Janet Van Dyne, and in the film version of Ant-Man I was pulled in by Evangeline Lilly’s Hope Van Dyne immediately, and couldn’t wait for her to have a bigger part of the action. I’m assuming the duo in the comics will end up being the same duo as the one in the films because, you know, marketing, but I don’t wanna be cynical about that. I actually like the Scott Lang/Hope Van Dyne dynamic in Ant-Man and I’m very much looking forward to Ant-Man and the Wasp to watch them solidify their team dynamic. A new book starring those two would be awesome!

Now that we see who’s here, let’s talk about who’s not here. For example, we see OG Odinson back in action as Thor, though he seems to have a spiffy new hammer that’s not Mjolnir. So, does this mean that Jane Foster is still going to be Thor, too? Or has the entire thing been retconned. I hope the former.

I also don’t see America Chavez. Now, I’ve gotta be totally honest: while I was so excited for America to have her own comic, I was less impressed with the title as it went on. That said, the character is great, and this Marvel 2018 shake-up promises new creative teams. What I hope is that another Latinx writer (preferably female) is brought in to give the character new life in her own title.

And that, ultimately, is the biggest change I’m hoping for. Marvel can do all the changing of books and characters that they want, but where they really need “A Fresh Start” is in their hiring. What I really hope is that the new teams they’re bringing in will bring more gender parity among Marvel’s creators. I hope that more people of color are hired, specifically for writing duties (as a good bulk of their artists are men of color).

I hope that the changes in the content of the books are matched by changes to how Marvel creates those books.

We’ll find out in a couple of months! This new jumping-on point into the Marvel Comics Universe begins May 2018.