Well, at least they went with a giant nerd this time. 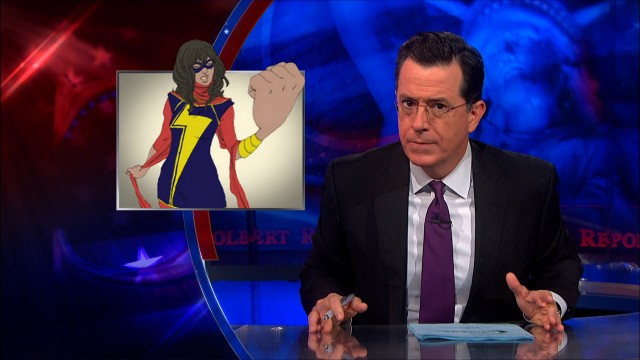 Update: The big announcement? Falcon will be taking over as Captain America! Get the details and see the clip from the show here.

Just yesterday Marvel made a splash when they announced Thor would be replaced by a woman (and keep his moniker) in an upcoming title. They’ve just revealed there will be another announcement tonight, this time on The Colbert Report.

Here’s the info Marvel sent in their press release, along with mentioning it would be a “historic announcement.”

Marvel is excited to announce that on Wednesday, July 16th, at 11:30 p.m. ET/PT, Marvel’s Joe Quesada will be announcing an all-new comic book title and all-new era for one of Marvel’s most classic Super Heroes on the Emmy and Peabody Award-winning “The Colbert Report” on Comedy Central.

Yup, that’s all we have to go on at this point. This isn’t the first time Quesada has appeared on the Comedy Central show nor is it the first time Stephen Colbert has had a run-in with comics. He’s covered comic news before in general as well but it will be interesting to see what comes of this particular secret reveal. Any guesses what it will be?