Marvel Doubles Down On Campaign Against Bullying With One-Shot Comic 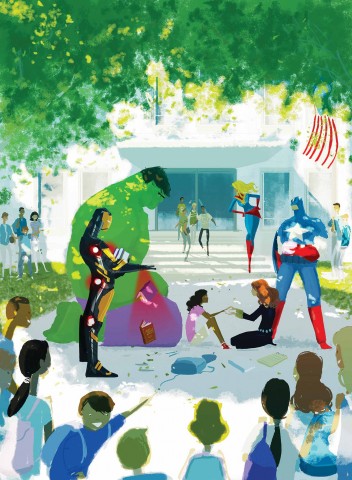 After the success of their recent anti-bullying variant covers in honor of National Bullying Prevention Month, Marvel is following up with a special one-shot single issue to be released in January. If the artwork released yesterday is any indication, they should probably also be packaged with a large amount of tissues and a stuffed hulk toy to hug, because feelings will most certainly be had by all.

“From Peter Parker, Midtown High’s only professional wallflower, to the ever-misunderstood Kamala Khan, Marvel has a proud history of working to raise awareness about bullying and representing its victims as much as possible,” series editor Devin Lewis said in a statement released yesterday. “Bullying is a problem that can affect everyone in a community, and it’s up to that very community to come together to combat it, and, with this issue, Marvel’s Avengers, Spider-Man, and Guardians of the Galaxy are joining the fight! I know how comic books can help ease that feeling of isolation, and I couldn’t be more proud or excited about the talent we’ve pulled together for this project!”

An important thing to note: as we learned in the ““End Bullying! Responding to Cruelty in Our Culture” panel at New York Comic Con this year, the standard anti-bullying education that’s usually taught in schools around the country is actually pretty ineffective. Instead, Hero Round Table founders Adam Hartley and Matt Langdon advocate for “pro-hero” campaigns, which place their attention not on shaming the people who engage in bullying but instead making sure that kids feel comfortable reaching out to victims and taking a stand in the moment that they see bullying happen.

I want to point this out because despite what Marvel is choosing to call this campaign in their press releases, the art they’ve shown us here is absolutely conforming to the “pro-hero” concept: if you look at the two covers, the focus is very much on checking in on the victim and making sure they’re not alone. No where is a costumed superhero beating up on a jock while a nerd watches, and considering the problematic power fantasy that such a scene would represent, it’s very refreshing to see what they’re bringing to the table instead. 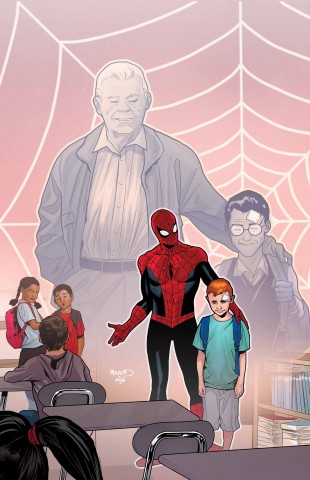 Avengers: No More Bullying #1 will hit shelves, Marvel.com, and the Marvel comics app in January.