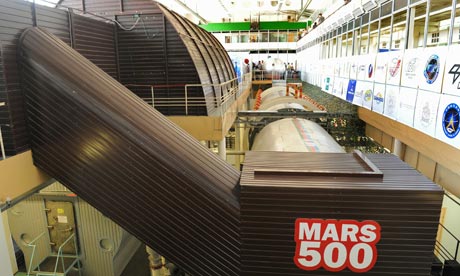 This morning, an international group of six volunteers recruited by the European Space Agency began the Mars500 project. Taking place at the Institute of Biomedical Problems in Moscow, the experiment will simulate the long journey to Mars as scientists observe the physiological and psychological stresses impacted on the six spacemen over a period of 18 months. Keeping them sheltered from the perils of space otherwise known as Russia is an elaborate craft consisting of a series of tubes that simulates the different living environments one might encounter on the International Space Station.

If you’re thinking of hamsters, I’m right there with you.

The volunteers-turned-cosmonauts include Alexey Sitev, Sukhrob Kamalov and Alexander Smoleevskiy of Russia, Diego Urbina and Romain Charles of Europe, and Wang Yue of China, all young men with mostly scientific backgrounds who volunteered for the difficult mission to contribute to knowledge of space travel’s effect on the human body and mind. Save for the lack of low gravity conditions (which strikes me as something of a letdown, but still), the men will face conditions already faced by astronauts today, including limited food supplies, loneliness, and no view to speak of, all things of interests to the observing researchers. As the BBC reports:

Scientific investigations during the experiment will assess the effect that isolation has on various psychological and physiological aspects such as stress, hormone levels, sleep quality, mood and the benefits of dietary supplements.

“We expect Mars500 to have Earth applications, in understanding group dynamics connected to isolation and loneliness, for example,” she said.

“I hope it will also help us understand better some groups, such as those elderly people who are isolated in their homes. It should tell us about coping behaviours.”

In addition, Urbina and Charles have been tapped to keep in regular correspondence with the outside world via e-mail over the course of the experiment. Just e-mail. Don’t expect tweets from these guys. As such, it’s unsurprising that the ESA has called the experiment, according to eWeek, “the ultimate test of human endurance.” However, in their first message from the craft, Urbina was more than optimistic, writing:

We are so pleased to be part of such a nice crew and such an important experiment, and hope that some of you, among our readers, will actually be the ones who will step on Mars in the future. The internationalism of Mars500 does not only involve the crew, but also the researchers who come from so many countries that I could easily surpass the word limit in this blog post. This is for sure a strong point of Mars500, as no human flight to the Red Planet will be possible by one single Nation. Knowing how to collaborate at all levels is fundamental.