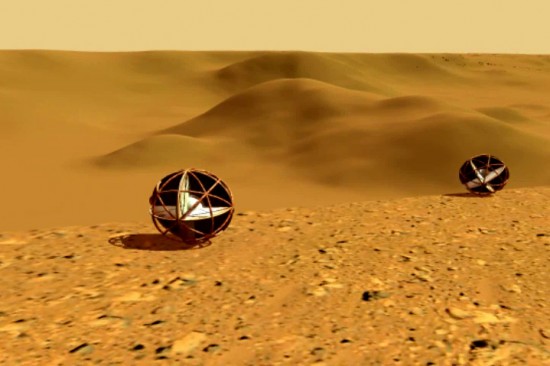 Some scientists are looking at Mars exploration from a different angle, and have created two designs which can only be described as tumbleweed-based.

These spherical machines would be propelled by the carbon-dioxide breezes of Mars.  While this method of locomotion lacks precise maneuverability, it makes up for it in speed, distance, and survivability.

Martian tumbleweed-rovers (tumblrs?) wouldn’t have the complex joints and wheels of the rovers, vulnerable to the ever present martian dust, could turn their kinetic energy into power for their instruments, and, says Dr. Kim Kuhlman, Senior Research Scientist of the Planetary Science Institute:

A fleet of Tumbleweeds could cover a much greater area using the wind for propulsion,” she added. “Some of them may get stuck and become stationary platforms similar to Spirit’s current situation, but the majority would perform a ‘random-walk’ survey of an area orders of magnitude greater than that of a rover.

The tumbleweeds require smaller instruments which have not yet been developed, but would be able to do many, if not more, of the things that the wheeled rovers already do, like “track atmospheric conditions, geographical location, communicate with orbiters (to relay data back to Earth), and even probe the chemistry of Martian soil.”

A part of us can’t help but see this as a combination of two different XKCD comics.

Visit Discovery News for the full article and a video on the Tumbleweeds, with plenty of computer rendered images for everybody!