We don't know if bacteria supplied it, since no one denied it.

The Mars Curiosity rover has made an exciting discovery: Mars has methane, which is a possible sign of life. Beautiful, stinky life.

Initially, Curiosity didn’t detect any methane on Mars, which was a bummer for NASA scientists. On Earth, more than 95% of methane gas is produced by microorganisms, which is why finding it on Mars is so exciting. However, over a period of months from November 2013 through July 2014, Curiosity detected a sharp rise and then decline in methane levels as reported in a Mars Science Laboratory paper just published in Science.

Still, that’s not a guarantee that there’s life on Mars. There are non-toilet-humor-related, non-biological explanations for where the methane could have come from and why its levels would fluctuate wildly. It could be from chemical interactions of water and rock beneath the Martian surface, but that would still be pretty exciting in itself. 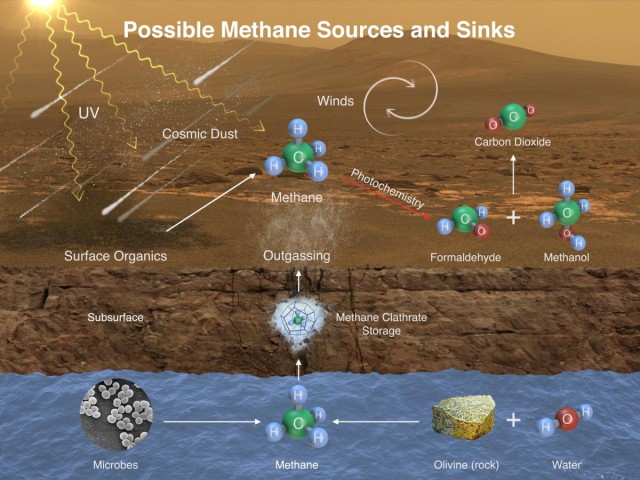 Possible reasons Mars is gassy.
(image via NASA/JPL-Caltech/SAM-GSFC/Univ. of Michigan)

Curiosity also found chemical building blocks of life in samples from Martian soil and rocks. Though these compounds can exist on their own, they’re still promising for the chance that there either was or is some form of life hidden beneath Mars’ surface. But whether it ultimately gets blamed on bacteria, chemical reactions, or the dog, Mars is producing methane, and Curiosity will get to the bottom of it.

(via Discover, featured image via NASA)