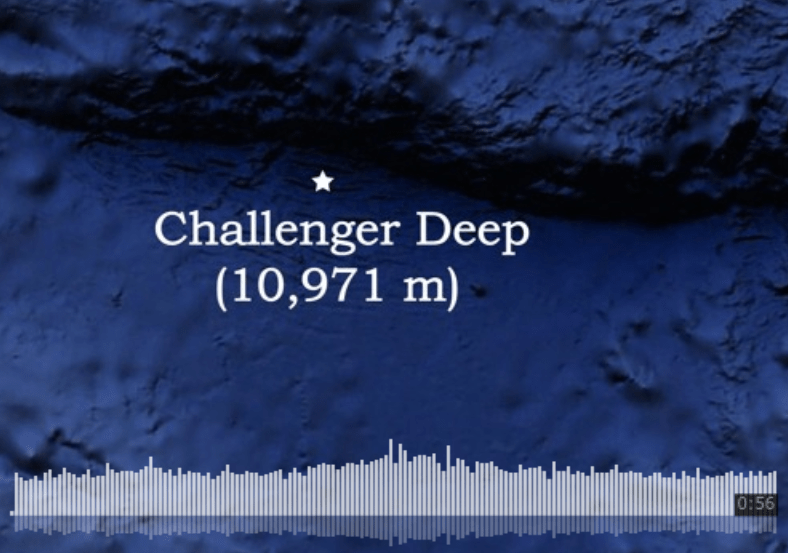 Last November, oceanographer Bob Dziak of the National Oceanic and Atmospheric Administration successfully retrieved a hydrophone he and his team had planted at Challenger Deep, a valley at the bottom of the Mariana Trench.

At approximately 36,000 feet below the surface, Challenger Deep is, as the name implies, pretty damn deep–in fact, it’s the deepest known point on the Earth’s seabed. Dziak and his fellow researchers were able to record 23 days of audio from Challenger Deep before successfully retrieving their equipment. You can listen to some of the results below.

Here’s a baleen whale call as recorded from Challenger Deep:

Here’s the sound made by a magnitude 5 earthquake:

A whale calling before and after the earthquake:

You can listen to more under the sea deep cuts here.

Speaking to Gizmodo, Dziaz said audio recordings like these can help us gain a better understanding of what life looks like in some of Earth’s most alien landscapes: “Light does not propagate underwater very far. But sound waves travel long distances through the Earth’s oceans. Acoustics is really the best way to get a good picture of deep ocean environments.”

The project was funded by the NOAA as part of an ongoing investigation into the increase of human-caused ocean noise. Dziaz explains,

You would think that the deepest part of the ocean would be one of the quietest places on Earth.Yet there really is almost constant noise from both natural and man-made sources. The ambient sound field at Challenger Deep is dominated by the sound of earthquakes, both near and far was well as the distinct moans of baleen whales and the overwhelming clamor of a category 4 typhoon that just happened to pass overhead.

I’m disappointed no Megalodons or plesiosaurs decided to announce their existence on these tapes, but it’s still pretty absurd to be listening to sounds recorded from one of the most inaccessible parts of our planet. What a time to be alive!

(via Oregon State University and CityLab.com)