Everyone, We Need to Talk About 17th-Century Badass Writer Margaret Cavendish 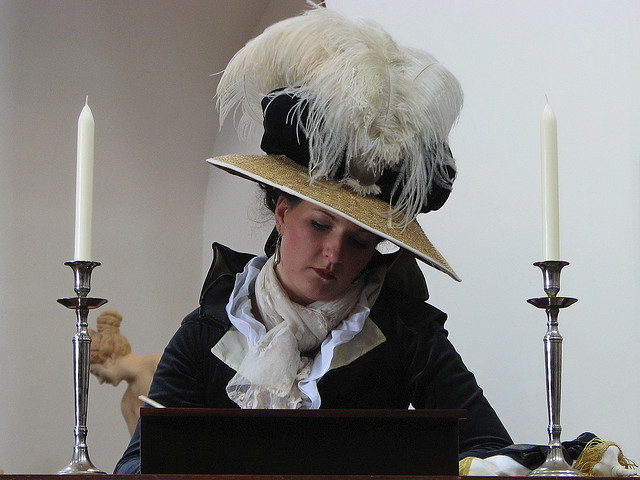 You Guys, We Need To Talk About 17th-Century Badass Margaret Cavendish

Because the idea of “geek culture” is relatively new, and because women have to fight tooth and nail to get respect within that culture (cf. Feminist Frequency’s Anita Sarkeesian or Brianna Wu and Gamergate), we tend to forget that even in this brave new world we have predecessors, women who fought battles we can only imagine, women who blazed trails—or, in Margaret Cavendish’s case, blazed whole new worlds.

If you’ve studied early modern women’s writing, you may have heard of Margaret Cavendish, if only glancingly. Just a generation ago, Cavendish was unknown to all but a few. Partly this was due to her admittedly clumsy poetry, partly because of the obscurity of her ideas—and partly because of the harsh judgment passed on her works by none other than Virginia Woolf. In “A Room of One’s Own,” Woolf wrote “what a vision of loneliness and riot the thought of Margaret Cavendish brings to mind! As if some giant cucumber had spread itself over all the roses and carnations in the garden and choked them to death.” (And if you’re thinking that cucumber sounds awfully phallic in that garden of English literature—well, I agree.)
But thanks to the illuminating work of a generation of scholars (some recommendations below), we know far more about Margaret Cavendish’s work in context with the intellectual currents of her day. We see her courage and brilliance (even if we sometimes cringe at her arrogance and snobbery).

Here are just a few of the gajillion reasons you’ll want to know more about Margaret Cavendish:

In her excellent biography of Margaret Cavendish, Katie Whitaker argues that Cavendish was “the first woman to live by her pen.” The phrase needs context—Cavendish’s work could not come close to providing the income the extravagant Duchess of Newcastle and her husband, William Cavendish, needed. However, she was indeed the first woman to seek publication on her own terms, under her own name (rather than having her work circulated in her own social circles, publishing under another name, or having her works published without her knowing.)

Cavendish’s first book, Poems and Fancies, was published in 1653 and was followed by discourses, plays, poems, stories, philosophical treatises, and epistolary works. As a result, Cavendish was simultaneously ridiculed and admired, scorned and praised. The 17th-century diarist Samuel Pepys called her a “mad, conceited, ridiculous woman,” and the poet John Evelyn called her “a mighty pretender to Learning, Poetry, and Philosophy.” And lots of people (presumably behind her back) called her “Mad Madge.”

Cavendish developed an intense interest in natural philosophy (today we would call it “science,” but many historians have argued that term is anachronistic when talking about the 17th century). She published theories about matter and motion and even wrote a series of “atomic poems.”

In May 1667, the famous Royal Society of London, the storied academy of science that counted among its membership Robert Hooke, Thomas Hobbes, and (a few years later) Isaac Newton, opened its doors for a visit by Cavendish. They pulled out all the stops, performing experiments with microscopes and magnets and other marvels of the day.

It was rather a brave thing for the Royal Society to do, as Cavendish was an outspoken critic of the experimentalism of some of the members. For example, in Observations upon Experimental Philosophy (1666), she called experimental philosophers (like Hooke and Robert Boyle) “Boys that play with watry Bubbles.”

While Cavendish proclaimed herself “full of admiration” for the sights she’d seen, the august membership of the Royal Society was not mutually impressed—it would be almost 300 years before another woman was allowed to visit.

The Blazing World was originally appended to Observations upon Experimental Philosophy because, as Cavendish argued “by reason most Ladies take no delight in Philosophical Arguments.” (Yeah, I know. Cavendish says a lot of stuff like this that would make you cringe. This is definitely a case of “your fave is problematic.”)

The Blazing World is part science fiction, part fantasy, and part utopia with a good helping of WTF.

Basically, a beautiful young woman is kidnapped and brought to another world connected to ours at the North Pole. She encounters talking animal scholars (yes, you read that right) like spider-men (mathematicians), bear-men (experimental philosophers), and parrot-men (orators). (Think Mr. Tumnus without the cozy tea.) These animals teach The Lady about the new world and introduce her to the Emperor, who falls in love with her and makes her the Empress.

The Empress, a natural scholar, wants to write but needs some help, so she asks the spirts of this other world to bring her a scribe, and they bring her….drum roll…somebody named “Margaret Cavendish.”

There’s lots more that happens and you can find out about it here (don’t miss the intellectual menage-a-trois with The Lady, Margaret Cavendish, and William Cavendish), but I want us to stop for a moment and think about this.

Margaret Cavendish writes some of the first science fiction.

That character is basically perfect.

Do you realize what this means? Margaret Cavendish may in fact be THE VERY FIRST MARY SUE.

Jennifer Sherman Roberts has a PhD in English literature and spent a lot of time studying the history of science and medicine. She is now a writer living in Oregon with her family, two guinea pigs, and one very freaky greyhound dog. You can find her on her website, or on Twitter @jshermanroberts.