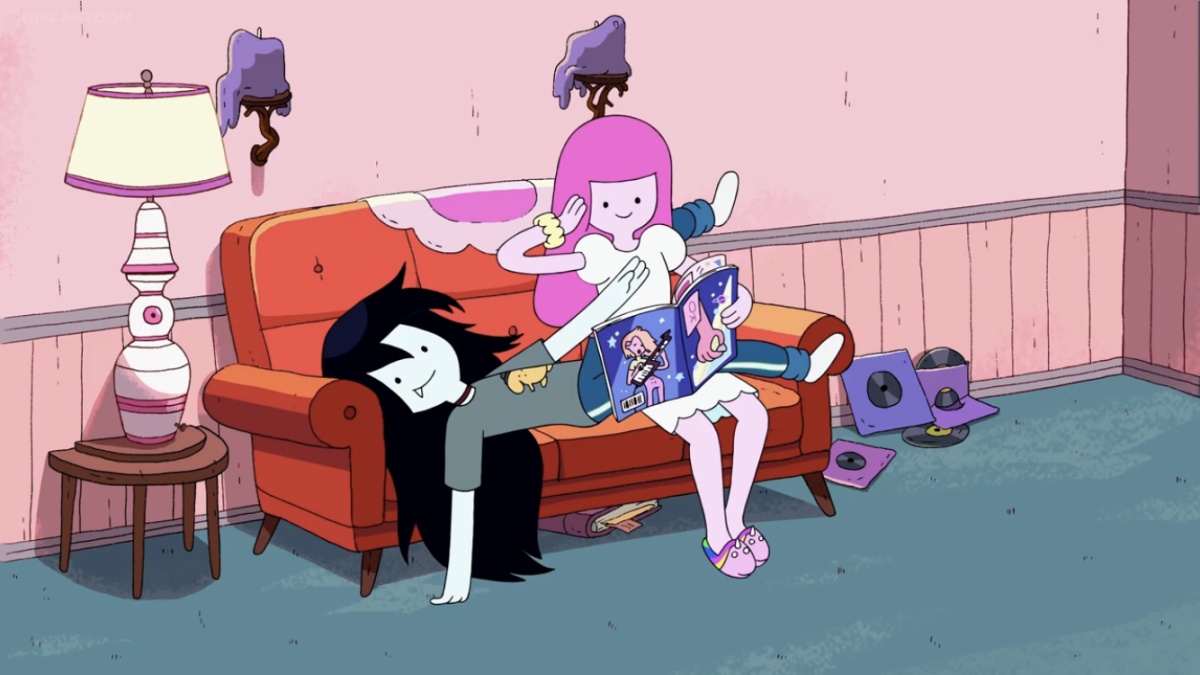 I had high expectations for the episode of Adventure Time: Distant Lands highlighting Marceline and Princess Bubblegum, but I didn’t expect it to be as perfect as Obsidian managed to put it together.

Marceline is called to the Glass Kingdom to help stop a dragon that was accidentally released when one of its citizens attempt to fix a crack in his face. Along the way, we get the backstory for both Marceline and her mother, as well as a past breakup scene between Marcy and PB.

I loved the focus on Marceline’s human mother because, for so long, the major parental bonds we’ve seen her around were Simon/Ice King and her own demonic dad, Hunson Abadeer. Her human, Black mother was someone who only appeared in brief flashbacks. Obsidian fills in the gaps in that relationship, showing that Marcy’s mom absolutely loved her daughter, but maybe had some fear around the girl’s demonic side. Still, seeing that she had the blood-coughing illness that plagues women in fiction, she sent Marcy off on her own so that the girl wouldn’t have to watch her die.

But without knowing her mom was sick, Marcy sees this as a rejection of her. The idea of being a monster fuels Marcy’s punk rock side, filled with anger and resentment—anger that she doesn’t really feel anymore because of the good place she’s in with PB now.

The song that initially subdued the dragon was a very intense breakup song (that slaps, tbh) and set up the complicated foundation that we see in the initial series between the two women.

Marceline and Bonnie’s relationship is content, but Marcy still has a hard time being emotionally vulnerable because, as she gets to explain, when her own mother was sick she didn’t say anything. That has caused her to not feel comfortable sharing vulnerability.

For Bonnie, seeing Marcy being seen as the champion of the Glass Kingdom unleashes some insecurities in her. She thrives on being brilliant and a problem solver, so the idea that a song about how much she sucked is what stopped the dragon in the first place sticks in whatever the bubblegum equivalent of a craw is.

What saves the day is not the punk rock anger, but the love ballad of devotion, leading to a kiss between the two.

Obsidian hit on multiple levels for me. A great story about accepting imperfections and differences. A powerful look at the love between Marcy and her mom which canonizes without question her own blackness. Full-on Bubbline without just being subtext. And adult Finn who looks super cute and is rocking a Jake chest tattoo. (I don’t accept that Jake is dead. He is just retired. He’s an alien so he has to live forever, okay?!)

To me, this also proves, without a doubt, that the writers were never afraid of canonical Bubbline, but felt pressured to push it to the side. Obsidian feels like an excellent Adventure Time episode, only proving that the relationship fits perfectly into the foundation of the show. I’m so glad that this episode exists, and I can’t wait to see what comes next in this miniseries.

Now, excuse me. I need to save every piece of fan art on Tumblr.